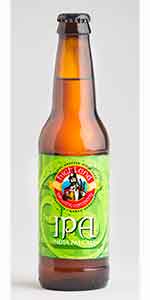 Pours a golden color with moderate head. Hops and citrus dominate the aroma with some floral tones in the background. Tastes fantastic, the perfect combination of bitter and sweet. IPA mouthfeel with bitterness coming through at the end. I am new to the craft scene and may be overreacting, but this beer is awesome.

This is my favorite beer. It has the right blend of hops, making it herbaceous, citric, and floral. It also has the perfect amount of alcohol. . . I am always looking for it on tap. .

By the smell, I was expecting something much better and more familiar... The citrus-notes promised on the label were woefully absent, although the "resiny" character dominated the taste. Sufficiently bitter, but that's all there is- not enough tang to counterbalance.

Bought in OBX at a Brew Thru; this is a West Coast style IPA labeled as containing Chinook, Citra and Centennial hops; was disappointed with the older date after the purchase (filled 4/26/17) since I like my hoppy beers no more than a month old at the most; I was very pleased with this beer overall, just want to try it fresher in future

Actually went into a giant beer store in NC looking for WW Freak of Nature or Pernicious, but none were available. ( I wonder why--not) I saw this and, having had positive experiences with Highland, I picked up a sixer. Turned out to be a great move. Very solid West Coast IPA--citrusy and dank where it needs to be, malty in the middle and bitter on the finish. At 7%, definitely sessionable. It was Highland's first attempt at a West Coast IPA, and they nailed it.

Ale poured a beautiful deep gold with inch white head. Nice hopped aroma with some citrus and tropical notes. Well hopped bitterness up front. Biscuity maltiness comes through in the middle to offer balance. Finish is pleasingly bitter. First class IPA from a regional southern brewer. This was bottled on 12/29/16 so it is about four weeks fresh. To my tastes this stands up well to Bells Two Heart and SN Torpedo.

T: Follows nose. Slightly dry finish with some pine bitterness at the end.

Poured from a bottle into a shaker pint glass.

S: The aroma is sweet and a little spicy--every time a took a sip, the aroma made me want to guzzle it. Tart citrus notes dominate.

F: Quite carbonated and effervescent. Refreshing.

O: This is a wonderful beer from a wonderful brewery. The 7% alcohol content seems about right, as it would be easy to drink a lot of this beer.

I purchased a bottle in a mix 6er and liked it. Indeed, I'd say this is a pretty good IPA with all that the style implies. This one has fairly strong lemon notes. I'd buy it again. Pours towards the yellow end of the ale spectrum.

Picked up a sixer from the Food Lion in Banner Elk Saturday for $8.99.

Beer poured orange with a decent white head that is leaving lacing.

Nose is tropical and citrus hops.

Taste is citrus and tropical with a light pine finish.

Overall I have enjoyed this brew over the week,, definitely worth a shot.

part of a six pack picked up at McScrooge's in Knoxville, TN.

Looks the part of an IPA. golden yellow with a good white head. Decent lacing and carbonation.

Aroma hits you with some hops and a slight sweetness from the malt.

Taste turns the nose around with a sweet malty wash and a solid hop bite at the end.

A good offering from Highland. Looking forward to the other 5.

Looks decent and has minimum head. To me, this is a nother IPA that has too much malt that detracts from what should have been a more citrusy and hoppy offering

Highland seems to be upping their game. This is a very good IPA with a malt base that makes the hops pop. It is also a great looking beer, with a crystal clear, burnished gold body and fluffy, tight white head that just does not give up. At $7.99 a sixer, I'll be hitting this one again.

Not my cup of tea frankly. I am an IPA fan, but the aftertaste (the malt perhaps) is a little overpowering for my palette. Glad I tried, but would not seek out.

Nice clear orange gold pour with a white head that fades but leaves moderate lacing behind. Smells slightly sweet with citrus, mango and pine notes. The taste is nice and fruity with grapefruit notes and a nice malt sweetness, This beer finishes clean with a nice lingering pine bitterness. Very well done IPA.

This IPA pours to a medium, creamy white head on a slightly hazy, effervescent pale amber body; head retention is moderate and lacing is good, consisting of sticky slabs and caverns. The nose is medium-big: a nice blend of grapefruit, green grapes and spicy/perfumey florals, with slight alcohol overtones. The palate leads with bitter pine, IPA soapiness and a hint of citrus; by mid-palate the grapefruit emerges to eclipse the pine, the soapiness cedes to a bittersweet nutty character, and the perfumey florals from the nose show a bit of themselves. The bready malt foundation is fairly apparent, and bitterness is moderate for the style. The finish is a pronounced bittersweet nuttiness, followed by a style-moderate grassy bitterness that lingers for a good while. Retrogustative olfaction is grassy. Mouthfeel is commensurate with the light-medium body, and the texture is slightly creamy and medium-peppery from the well-expressed carbonation. (12 oz bottle, 50 days after pkg)

Poured from a bottle into a tulip glass. A nice orange color with plenty of lacing. The smell was fantastic. The hop flavor was evident. A nice bitter aftertaste.

Poured a very attractive bright and clear, deep golden to bronze hue with a quickly receding white and foamy head.

Very astringent flavor of bitter fruits; a potent combination of hops - Chinook, Citra and Centennial. There is a welcoming malt presence that keeps this one from a one-dimensional hop bomb.

Slick and aggressive mouthfeel with a comforting bitter aftertaste that lingers on the palate.

A very good IPA from an excellent brewery.

Filled on 1/6/16.Pours into a standard pint glass a clear brass with a bone white thinner but well sustained head atop.A big shot of grapefruit really hits ya up front in the nose along with underlying pine,and tangerine.Grapefruit and tangerine flavors battle it out for most assertive hop notes with the grapefruit edging it out but wow what a big fresh splash,a bit of caramel doughiness lingers in the finish.What can I say Highland produces another great beer,not just a ho hum IPA here,very well made.

Light medium body that is quite smooth and has a slick element in the texture. World class carbonation with a solid burst of effervescence in the middle and a finely bubbled prickly finish.

The outstanding flavor profile is hop flavor centered, wonderfully balanced and has a mild to moderate rind based bitterness. It begins with a rush of grapefruit rind over a powerful biscuit sweetness with caramel notes. As the initial rind subsides, the underlying sweetness allows tropical hop flavor (mango) to emerge along with orange / tangerine hints. The middle yields a light moderate bitterness that has pine as a supplement to rind. The finish is a bit crisp and dry and a slightly sweet tangerine rind bitterness lingers.

Tasty IPA from one of my favorite breweries. Tastes very much like a modern IPA; taste is of dank hops, lots of juiciness going here. Pours a golden/yellow with lots of hop aroma and some grain on the nose, a sharp bitterness but it is still pleasant. They might have added a little pilsner malt here but overall the body isn't lacking but isn't notable either. A good balanced modern west coast IPA.

A - Clear orange, with a one finger fluffy white head. Good retention.

L - Golden pale, with 1 finger of head and some nice lacing on the glass. Filtered and light appearance

O - A tasty WC IPA. Great addition to the Highland lineup. $7.99 a 6 pack at my local store? Great beer and price!

A: Pours a clear medium golden yellow in color with moderate amounts of active visible carbonation rising from the bottom of the glass fairly quickly and light amounts of copper highlights. The beer has a two finger tall foamy bright white head that reduces to a couple of small patches of medium thick film surrounded by a thin film covering the remainder of the surface of the beer and a medium thick ring at the edges of the glass. Moderate amounts of lacing are observed.

O: A very nice West Coast IPA and very enjoyable beer - nice to see something new in distribution from these guys (one of my first go to Carolina breweries in the early 2000s). Definitely worth grabbing, maybe should grab a few more of these the next time I'm at the store.

12 oz bottle pour into a tulip glass. Very clear orange/amber color. Minimal head that dissolves into an omnipresent ring. Sticky lacing. Strong notes of citrus on the nose with a touch of breaded malt. Crisp and clean taste with added citrus and pine. A healthy dose of bittering hops make it true to the West-coast style. One of NC's stronger IPA offerings. Well done, Highland!