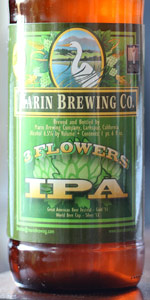 Had on-tap at the Magnolia Brewpub in SF. Poured into a 20oz nonic pint glass.

Pours a rather pale amber color with golden tones around the glass. About a half finger of frothy head coats the top of the glass, and if they were intent on ripping people off here (they're not, thankfully), I'd imagine a lesser pour in the same glass would produce a huge head of sorts. Definitely looks resinous and well presented. Looks like every IPA made on the West Coast ever, but mister, it's still a good looking one.

Smells of huge soapy citrus notes at first, as well as some slight cracked barley aromas melded with spiciness no doubt from the rye. Ever since Hopocalypse, I've been enjoying the light infusion of rye in IPAs. Regardless, I wouldn't consider this to be a rye beer by any means, but rather just an IPA with rye malts added. Floral as hell, with light notes of honey and caramel - combined with the peppery sensation, it's really flavorful. Could be a little less soapy, but overall it's nice.

The flavor is equally soapy as well - at least at first - but rather than retain vibrant notes of dishwasher liquid, it eventually turns into more of the spicy floral notes as before, gingerly coated with light grapefruit and lemon and lime peel. Really not offensive by any means, but definitely not very juicy or creamy. Astringent as hell, almost... Took a bit to finish this with the dried hoppy flavor and rye at the back. However, the low alcohol and balanced flavors never made this a complete chore, and indeed, it got much better as it warmed up and more of the malty flavors opened up in a bready, thickened manner.

A very decent IPA - the rye malts are subtle enough to provide extra spice to the zest. While it could be less soapy, the floral notes are pretty good, and malt profile holds the fort well. Maybe a little TOO dry, but there's nothing I can do about that given the concept. Worth a try for sure - much better than anything bottled I've ever sampled from Marin Brewing Co.