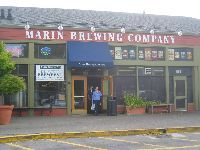 First stop of the day on my drive from Long Beach, all the way up to Santa Rosa for the 2005 Russian River Big Blue Ball New Years Eve Party.

I set off early at 5am from LB, so I had the distinct pleasure to experience a drive over the picturesque I-580 Richmond-San Rafael Bridge whilst clouded in a low puffy white rolling sea fret as the sun started to shine in the early morning and blue skies broke after an earlier torrential downpour. Soon I found myself peeling off onto Sir Francis Drake Boulevard and Westwards, past the infamous San Quentin Prison on my left and down to the hill to take the right at the lights onto Larkspur Landing, a short slow drive round the arched circle and taking the left down into the Parking Lot just opposite Old Quarry Road on the right had me parked almost outside the Brewery Tap.

Hard to mistake the outside if you follow the above directions, yet once inside the main front doors (the ones shown in the BA picture as opposed to the back entrance), Marin comes to life. The stainless steel Brewery kit stands proud to your left, but my attention was drawn away from this by the prized collection of Brewery Medals, Certificates and Awards neatly on display to your immediate right. The wooden bar runs all the way along the left back wall to the back entrance. Opens out to the right, a wooden waist high partition wall contains lots of local Artwork and cleanly separate the table area from that of the Bar. Lots of wood, brass and more artwork, including a very large mural by local paintbrush flicker Matt Tasley on the back wall showing a rather grim darkened view of Mount Tamalpais. Breweriana in the form of Coasters, Bar Towels, Old Cans, Bottles and Glasses are all over the place, a hanging racing cycle and some other Cali sporting memorabilia decorate the interior. Plenty of windows to the outside World and a high ceiling add a well-lit, light and airy feel to the interior. A small but nicely appointed outdoor area wraps up the potential area for drinking.

Started by taking a stool at the Bar, and ordering some food. I snagged a Soup and a Salad for just under $9, the Soup was a decent sized Bowl of Yellow Split Pea Vegetable Soup served with a fresh Caesar Salad. This came with a big thick slab-like quarter-Cob Chunk of Bordenave's Bread. A great breakfast, very wholesome and filling.

Service was adequate but nothing spectacular, functional if you will with no frills, but I kinda like that utilitarian approach at times, and as I was just planning a quick stop here it suited me perfectly. Nothing special though.

Now the only beef I had with Marin was the Selection. My first thoughts were What the Fuck!?!? I have no idea why, and it may have been presumptuous on my part, but I *expected* a full range of Marin brews, at least from the Bottle. Why!? Well, if you have ever been to a beer store that serves Marin Bombersthey always have a solid range right?!?! So I automatically expected at least the same here. But strike my furry little cotton socks if the bottles were nowhere to be seen. Just the 3 including Mt. Tam Pale Ale and White Knuckle, but at something like $6-7 to drink in, erm no thanks. OK, so Ill go for the draft brews, lots of taps, great list in the Menu handed to me, but, well just the 6 or 7 beers on draft, some crackers but way less draft beers on sale than taps on the Bar. I opted for the Tiburon Blonde as I have not tried that one before. I noted a sideways skewed Angram Beer Engine stuck against the back wall behind the bar, no pumpclip on my visit and it looked dusty and unloved..oh that brings tears to my eyes to see that.

Maybe Im being a tad harsh here but I struggle to justify anything higher than a 3.5 here, the Selection was the only let down for me, whether it is my own higher than reality expectations, or not, I felt the selection was half-assed. Arent Brewpubs and Brewery Taps supposed to be a Shop Window for the company as a whole, I can cut some slack to the limited draft selection, but would it really be that hard to stock a few cases of each of the wide range of Marin Bombers on sale!?! I think Marin is selling themselves short here, which is a shame!!

Hard to get excited about the place, if I am brutally honest, but its a nice part of NoCal and nevertheless has some solid brews and food, plus some fantastic scenery, but just dont come here and expect a full selection of Marin brews (as I did  duh me!!) and you wont be disappointed. That said, this was not a regrettable visit, far from it, even with the limited beer range. I am not sure I would make the effort to detour here specifically, though I am sure with the frequency that I get up to this neck of the woods, I probably would!!! But there again, it is *only* 5 minutes off the I-580 N on my way to Santa Rosa, so thats not saying much.

I suppose there's many reasons why I've never been here but after finally visiting I can say I don't see myself hurrying back anytime soon. Brewpub feels like one of the early ones that just never updated… well, anything. Even the crowd feels like it’s the same from 20 years ago. Didn’t eat, so can’t comment on the food.

I recently stopped in here on a trip to Northern California. The inside hosts a brewery, bar, and restaurant and I got a definite sports bar type vibe all around. The bartender was quite nice and attentive when I stopped in. They had around 15 beers on tap, most of which they already bottle, and a few one offs. They also can sell certain bottles for on site consumption or to go. The quality of everything was good.

Definite local hot spot, but parking is a nightmare in that center. Get a table outside if you can (and whether permits), but indoor seating is OK too. Food is on the better side of pub grub.

MBC was one of the first brew pubs to open in the bay. The beers have been consistantly good for a loooong time. Unfortunately though, the food and service at the brewpub has taken a steep dive over the years.