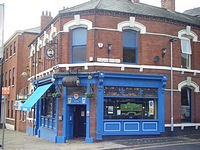 Henry Boons is the Brewery Tap & is a part of the Brewerys premises, forming one corner of the rather attractive Tower Brewery building. Boons is located on Westgate, which is the main road that leads east into Wakefield & is right next to Wakefield Westgate Railway Station (on the HS East Coast Mainline), itself a short walk into the City Center.

A wooden Cask hangs over the corner entrance & immediately leads you into a very traditionally furnished interior. Wooden floors & lots of timber form the construction of the inside, including the use of large wooden Hogsheads as Tables. A small room to your left has a Pool Table. The Bar sweeps in a 'J' shape to your right. Above, real thatching forms the roof of the Bar, très cool. Further to your right is a raised seating area that leads to an area called Boons Yard, which also has its own self-contained Bar, hosts live music events & is sometimes closed at quiet times.

The beer range varies, but it usually includes Clarks Classic Blonde, one of Clarks Seasonal/Monthly beers, Taylors Landlord & Tetleys on Handpump. Also serves what seems to be an ever increasing range (sadly) of Keg/Nitro beers. Occasional Guest beers.

Yet basically Henry Boons has a serious flaw; its a City Center Pub with a superb location, which wants to equally attract the Friday & Saturday Night crowd, whilst retaining a cozy Real Ale Pub atmosphere & persona. Somehow it just fails to achieve both goals & ends up being stuck in the middle  yet somehow continues to attract crowds from both arenas. It never seems to do enough to promote its own (Clarks) beers either, which is sad really, for this could be great Brewery Tap with a little more effort.

My biggest beef with Henry Boons has been the lack of consistency of the Real Ale over the years, due no doubt in part to the above identity crisis. But at Easter this year when I visited I was happy to find that the reports I had received of improved beer quality were not unfounded. This is a great Pub, no doubt about it, & the Taylors Landlord is always a safe bet  but I just wish they would push the Brewery's own beers a lot more.

P.S. If you are catching a Train from Wakefield Westgate  from Boon's, allow 3 mins. 29 seconds to get there for Platform 1 & an extra 40 seconds for Platform 2.