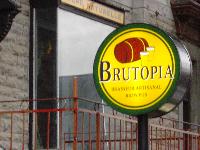 Headed over here with BA Erica after a quiet but sunny Sunday afternoon at the recent 2006 Mondiale. An easy walk, it was the first time I had ventured into Tourist Central, previous bar visits were a little off the beaten track.

The idea to head here was a collaborative effort, standing at the Brutopia stall at the Mondiale it seemed logical to make the short walk here once we wrapped up the afternoon session. Stone frontage with as red-tiled Mansard style roof which lends a European flavor to the architecture. A black steel raised deck area sits high with a whole flight of stairs to get to the entrance, a few steps lead down to a ground area too.

Inside its a honeycomb of rooms, alcoves, nooks and crannies which projects an old feel. Bare bricked walls, well worn wooden floors and lots of music posters adorn the walls. The bar area sits in between two brick columns against the back wall. A staircase to the left leads up to the toilets, outside which a shuffleboard game sits, a cool touch. The main bar area is open, a stage is directly opposite the bar and houses bands and open mike events. A room leads off to the back on the left, where the copper clad Brewery sits, as well as off to the right too, where there is access to an outside back terrace area. Darkly painted walls and low lighting all help to conspire and create a darkened interior with a distinct Pub-like feel to it.

The bar has two sets of taps, each set in a wooden case atop the bar. To the left they dispense the houses brews, whilst taps to the right the macros are served.

I tried the IPA, so-so. Ericas Rye beer had a similar taste to that of the IPA, sort of a house-beer taste. Not so sure about the quality of the beers, nothing outstanding but not terrible.

Food is limited to pub-like snacks but varied and includes Nachos, a good range of Tapas, Fries, Onion Rings, Bru-to-Burgers, Pizza, Calamari and Sandwiches and all reasonably priced given the high priced tourist enclave outside.

Service was fine, it was quiet when we headed in here, only a few guys were drinking in the back room, so the chap behind the bar had time to be talkative and chatty.

You have to take this place with a pinch of salt, moreso given its location in tourist land nearby to English bars with names like Churchills, but that said, its far from a tourist trap once inside and whilst the prices are higher than the norm they are less than the other establishments here on Crescent. The interior and atmosphere is cool, but the quality of the house beers, which I tried here and at the Mondiale, do not live up to the hype sadly.

Visited with a group of friends on a recent trip to Montreal.

While we liked the old fashioned pub atmosphere, the beer quality was well below average (akin to mediocre home brew) and the service left a lot to be desired. Overall, this is a subpar brewery that isn't worth your time, as there are much better options in Montreal. Check out Dieu du Ciel!, Isle de Garde, Hopfenstark Station Ho.st, Benelux, or Le Saint Bock instead.

Quiet mid afternoon - perhaps not typical time, but happy to have visited this venerable institution and was certainly not disappointed.

Went on a weeknight so it was kind of quiet, but the beers were bland and a bit flat. Waitress was nice enough to bring samples, but all underwhelmed.

Decent food, good service, but their beer is really pretty bad. Even their water doesn't taste great (they may make the beer with it...). All of their beers seem to have the same odd aftertaste.

Ordered what was branded an "IPA". No idea what the atrocity was in the glass handed to me, though. Considering we found this place through BA, we were convinced we were at the wrong place, but sure enough, this was the place.

Their beers are not great. Benelux has much better beers. They do 10oz pours and pints, but I wish they did samplers.

Great vibe. We went there by chance and liked it so much we came back for a concert the next night.

There was a straight 10 bartender working there.

Random collection of rooms and patios. Poor quality beer but the service was solid and the food was alright. Would not re-visit with so many great places in town

I love Brutopia. The beer is outstanding and I would recommend the place to anyone. The only thing that gets me is the lack of innovation. I doubt that has anything to do with the brewer(s). I'll assume their location requires them to pump out the same beers over and over again. That's alright but I wish they were a little more adventurous. Overall the place is great, laid back, and perfect for sipping on a pint.