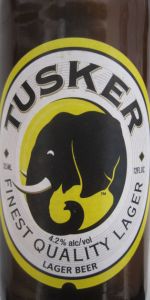 Together. Forever. When you open a bottle of Tusker you are joining the world in celebrating one of Africa's great original beers. Tusker has been brewed with care, craft and love since 1922. Every crisp, clean mouthful summons up the taste, sunshine and love of life of its African roots.

Reviewed by dkoehler42 from New York

Reviewed by Hayesbro from Pennsylvania

Tusker smells like the better class of mainstream lager. It's smells smooth, crisp, and refreshing with no overtly obvious off aromas. Up front, Tusker smells like sweet corn with pale, bready malts giving support. Sweet corn continues into the center where it mingles with hints of sulfur. The finish gives me hops in the form of fresh cut grass.

At first blush, Tusker tastes like it could be smooth, crisp, and refreshing. Closer examination though quickly takes the wind out of those sales. Up front flavors of sweet corn mix with a more pronounced sulfur presence than what I found on the nose. This combination gives the lager a bit of an off flavor which interferes with its overall refreshability.

Overall, the sulfur makes Tusker taste just a little bit off. Sulfur gives Tusker's flavor a sort of tartness that in my opinion just doesn't make for a tasty, refreshing lager.

Yellow with orange highlights topped off with a froth head and some staying power. The smell is what I would call a roasted wheaty scent with a muted wheaty flavor as accompaniment. Mouthfeel is well carbonated, not too distracting, and overall I find it solid. Nothing spectacular but better than I had expected.

Reviewed by Thisdrinkinglife from Switzerland

My first beer from the country of Kenya, a nation more known for its long distance runners less so for its beers ok let’s see how this goes.

Available in bottles, cans and on tap in selected outlets.

Big brown bottle featuring the iconic logo of an African elephant, with the theme “together forever” printed. Stands out, no doubting this is an African beer.

On pour I get the standard lagery look, creamy white head that looks good on the pour but fizzles out quick, and a light golden coloured beer. Just the look of a regular lager, ok.

The aroma is very faint but can pick up a sweet malty grainy smell, but nearly odourless.

The taste is very grainy and malted barley, but all on the faint thin level.

It has the feel of a regular lager, but not going to set the world alight, and truth be told it is a little boring to drink, light and thin, and has an overall flat taste to it all.

Novelty factor in having a beer from Kenya but nothing else at all there for me to return. A light lager that is boring. Definitely not worth entertaining again.

Reviewed by bubseymour from Maryland

Reviewed by rkowna from Illinois

The look was my first surprise, instead of a watery yellow I saw a light shaded orange beer with a fizzy and quick to disappear head. The smell made me nervous, something close to plantain, not exactly sure but my smell memory led me to believe I would be disappointed. The taste was the big shock. Instead of the dull bready taste I expected there was a nice malt and even slight hop contrast. There is a definite bite at the end that said this is beer. The feel was great, substantial flavor followed by a soft, not quite creamy, but good mouth feel.

This beer reminded me of why I need to drink more lagers, and I would say if more lagers brought this much to the table I probably would.

Reviewed by chitoryu12 from Florida

Overall: Not amazing, but better than typical Euro lagers. And not skunked like many of them!

M - Big medium body with some prickly carbonation that turns creamy on the very backside.

O - Totally unobtrusive and no personality, however, that's not a bad thing. This would be a nice bridge beer for the adjunct lager drinkers.

2.81/5  rDev -7.3%
look: 2.25 | smell: 2.5 | taste: 3 | feel: 2.25 | overall: 3.25
Tusker is one of those beers that I could always find on the shelf at a BevMo or Total Wine, but had never tried. Coming from a country, Kenya, which is synonymous of the image "Africa", adds intrigue. If it's still on the shelf after my 12 years of (un)professional beer drinking, someone else must be doing the drinking. Now it's my turn. Brown 12 ounce bottle with an elephant dominant on the label with its tusks (opposite of the pink elephants seen on Delirium Tremens), on to the beer:

This light goldenrod colored beer could be mistaken for hundreds of other national lagers around the world. Not much of a head to form, and there's just a little retention of lace which remains. A little action of tiny carbonation bubbles running through the body. The smell of cooked grain hits the nose, as does a funny smell that would be associated with boiled corn.

Even for a national lager, the flavor is on the lighter side. However, in this case, less may be more. It doesn't have much in the way of funny or uncomforting off-flavors, so that does at least make this beer drinkable. A little cooked grain here, a tiny boil of hop bitterness there. Hey, it tastes like beer! Feel light in the mouth and watery with a spritz of carbonation.

In the scheme of things, Tusker does better than the average national lager. It is easy to drink and doesn't make you gag despite a few pitfalls in loose ends like appearance and mouthfeel. If this satisfies me on a mild night, imagine my reaction after a day of safari chasing.

It pours a golden amber with good clarity and a modest then fading white head. Some upwardly mobile carbonation.

The aroma begins with some toasted biscuit and bread crust and floral hops but there is this off-putting olive oil or vegetable mash sensation that brings the experience down a notch.

The mouthfeel is light and soft. easy drinking.

The flavor is bready, biscuity, brown sugary, but overall sweet. Mild finish. Glad to say that olive oil thing doesn't show up in the taste. There are many of these lagers out there to choose from but this one would be lower on my list.

Reviewed by psoriasaurus from Thailand

Reviewed by tallpaullbc from California