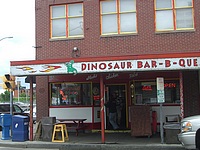 View: Place Reviews
Reviews: 30 | Ratings: 60 | Log in to view all ratings and sort
Reviews by slander:

So, after a number of failed attempts to trick Randy into a 12 hour jaunt up around New York state, along comes the need to audit my Syracuse and Buffalo districts. The light bulb comes on and I know I'd better jump on it quickly before they settle on who's going where. I offer, "I can drive to Syracuse, yeah, that'd be easier for me", but what I really mean is, "I's got places to see and they ain't in Buffalo..."
First night out, I did the play nice for dinner with the Carolina guys, but after that, it became a, "Um, I do this thing, see, and, uh, I've got this here red pen, and there are these places I've got to get to, um, yeah". Mark and Mary had been to Dinosaur before and were cool with goin' back there for dinner, I just took the liberty of mapping it and it's proximity to Blue Tusk and Clark's Ale House 'cause I'm the logistics guy, you know.
Been to the Dinosaur in NYC, this one was similar but different. Seemed more divey yet not. A 12 seat straightish bar holds the room with a pair of very inconveniently placed bar tables just in front of it, you have to dodge them to belly up to the bar. 6 or so booths run the length of the front windows with boards listing the liquor above them. A pen with 8 red plasticccy covered tables in an elevated seating area and a few more tables to the rear in a nook near the bathroom.
Weathered wood panelled walls heavily covered with motorcycle prints, musician photos and movie posters. A mounted deer head, a State of Wyoming flag, barbecue signage, and large colorful dinosaur murals. Low ceiling fans, spots and speakers suspended above.
We snagged a table with relative ease as a large rush of people flowed in behind us, timing being everything. Had the pork and brisket plate, but my favorite side dish was conspicuously absent. I mean, one would expect to find the Syracuse style salt potatoes in Syracuse. And you know what else? They had chili here. They don't have chili at the NYC location. What's up with that? Anyway, I settled for the mashed with gravy and the barbecue beans. Food was awesome, no surprise there.
18 taps on a single tower. Local goods from Middle Ages (Syracuse Pale Ale and house beer Dinosaur Ape Hanger), as well as regionals (Ithaca Nut Brown, Sackets Harbor 1812 Amber, Magic Hat St. Gootz, Otter Creek Stovepipe Porter, Sam Adams Lager, Yuengling), other micros (Sierra Nevada Pale Ale, Blue Moon), wah wah imports (Guinness, Bass, Labatts), a handful of macros, a cider and a root beer from Saranac. Hey, they do growler pours, too.
They're also packing 40+ bottles, macros and maltos galore with a few decent micros (Middle Ages Wailing Wench & Dragon Slayer, Magic Hat, Abita, Pete's, Sam Adams).
Good damn barbecue and some nice beer to put it down with.

What I had: Founders All Day IPA, Middle Ages Dino Smoked Porter, and Southern Tier 2XIPA on tap, Swag Sampler Plate and Tres Hombres Combo to split, a few sauvignon blancs for my better half.
What I liked: Really fun atmosphere, equal parts biker bar, barbecue joint and beer pub, diverse crowd, friendly and efficient service, bartender made great food recommendations, BBQ is top-notch (delicious seasoning, beautiful smoke rings on the brisket and ribs, tasty sauces), was happy to try fried green tomatoes for the first time.
What I disliked: Draft list is decent but could definitely improve, bartender double-charged us for a wine.
Would I go back? Absolutely. Despite its flaws Dinosaur is a “must-visit” when in Syracuse.
Overall Rating: 78

It's a biker bar. The selection's limited, but the food is hot and plentiful, and the barbecue is slow cooked so there's a fast turnaround between ordering and eating. Bit on the pricey side. Don't expect a diminutive, polite, professional waitress here. They have free rein to banter with customers, and it fits the atmosphere. Definitely a place to visit, at least once, if you're in the area or passing through.

Ok, so not a typical bar/restaurant. Biker BBQ joint. Waitresses treat u like sh*t, but that's what they r going for here. Food is outstanding. Brew selection is limited. Go here for the food and u will leave happy

I think the BBQ is ok, there are better places in the Syracuse area. The beer selection is also ok and features a lot of local, upstate NY breweries. The only problem with Dinosaur is the wait to get in. I have waited for over 2 hours once. Best way around this is to go there in the summer and get your food to-go and sit outside on their picnic benches in the alley. Virtually no wait and the food is the same. The wait staff is always trying to get people in and out as fast as possible.