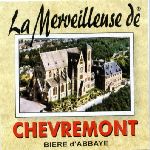 pours golden yellow with a very large white head, an awful lot of carbonation active in the glass.

Nose is very bitter, among the more bitter smells from a beer I have run into. Slightly sour and acidic.

First thing I wonder on taste is if this beer uses adjuncts. I know their rader ambree did use some and noted so on the label. Very odd malty taste, without much in the way of defining hops despite the high ABV, just a strong bitterness midway through and on into the finish. very slightly floral in taste, but overall pretty much what you expect an anonymous-brewer beer to be - unremarkable.

Presentation: The penultimate surviving bottled beer from my Easter 2003 trip to Belgium. It comes in a brown Duvel-like stubby bottle with a brass colored crown cap, not atypical of the other beers that Brasserie de lAbbaye du Val-Dieu brews. Which should be no surprise as this is a beer commissioned from Val-Dieu by Corman-Collins, who is a distributor of fine beers, wines & whiskys based in Battice, itself in the Liège province of Belgium. The obverse label has an ariel picture of an Abbaye, with the words La Merveilleuse de above in black italic font, whilst the word CHEVREMONT is below in red Capital Arial-like font. Contract brewed to celebrate the Centenary of the Basilica of Chèvremont in 1999; it remains a popular beer, and is still brewed.

I actually picked up a single bottle of this beer during my annual Belgium Trip at Easter this year, whilst I was at the Big Ben Bar in Huy. I hid it away and rediscovered it two weeks ago. Glad I did.

Appearance: Light golden color with an incredible amount of streamers that explode in my Westvleteren Glass. Nice ever so dirty white head forms rapidly and stays around for some time.

Nose: Incredibly acetic lemon nose, pungently eye-watering when deeply inhaled, tingles the nose with freshly squeezed lemon juice. Hints of hops and some grain malts. Spices linger and tease - what are they?

Taste: The best part. Starts with a Golden Ale beginning, hoppy with some light grain malts. The middle is very spicy, lots of acidity in the back end and some citric qualities. It has a sharp refreshing tartness with black peppery qualities. Dry but not astringently so. Drinks well.

Mouthfeel: Average feel, but the sharp acidity induces the cheeks to salivate with a lambic-like ability giving the impression of a bigger beer. This is some drink.

Drinkability: Damn, this one goes down really well. Far too well, the Stubby was gone in no time. I must get back to the Big Ben in Huy to sample this one again.

Overall: Literally translates as Marvelous one of Chèvremont and it is! Wow, this really is quite the beer. It comes in a Duvelian stubby, looks like Duvel, and is even described by Tim Webb as being like Duvel with a squirt of lemon squash in his latest Good Beer Guide to Belgium & Holland. Thats a great description, but I think that simplifies this beer a little too readily and may give the wrong impression. It is a little more complex than that. Well worth seeking out. If you get the chance to head to Huy in the Liège province of Belgium, you should definitely head up to the Big Ben Pub and try this one  you wont be disappointed!!!

Poured a golden honey yellow colour with loads of yeasty chunks floating around in it... White head poured large and foamy then faded quite slowly to light ring around the edge of the glass.. fair amount of carbonation drifts to the surface... lots of sticky wispy lacing clings to the glass..

Feel - Pretty smooth and creamy with a just a little sharp bite underneath... light bodied... Very very drinkable - scarily so at 7.5%...

Oranged color, with some floating bodies. A finger of foam, not so beautiful.
At the smell sweet melon, apricot, tropical fruti. All ripe fruit.
Very sweet at the taste too, almost with reminescence of jam.
Not so drinkable, due to the heavyness and the excessive sweetnes of ripe, and too ripe fruti.
Malty and sweet mouthfell.
Heavy and boring.

The beer sets in the glass a hazy yellow-orange color with the head generous in size and bright white in color, as it fades rather quickly the resultant lace forms a thin sheet to obscure the glass. Nose is large and spicy hints of citrus, sweet malt with some yeast tones, and a touch of pepper. Malt start, slightly sweet, medium body, finish is dry, acidic, moderately carbonated, hops are pleasing to the palate and the aftertaste some what alcohol bitter, a decent drinking beer.

A: pours a slightly hazy, dark orangy golden hue with moderate flows of tiny fizziness, while a light beige frothy head keeps the body quite well, leaving tight lacing along the way.
S: salty-sweet fruit esters abound, hinting at tangerine peels, overripe bananas, and oxidised pieces of Chinese pears, against a thick bedrock of syrupy malts and sugary sweetness with a tinge of old wet leather. Quite dense. A swirl brings out more perfumy fragrance of flowers, and a refreshing lease of hop aroma from Saaz and Goldings. Not terribly complex but integrated, for sure.
T: the rather clean entry of orangey-citrusness, white plums, and sweet pale malts fast lead towards a malty and sugary mid-taste, stimulated then by a kickback of peppery/spicy yeastiness and deepening hop bitterness, leaving in the end a mixed aftertaste that is mildly chewy, herbal (licorice powder) and hawthorn-fruit-like. Throughout the drink, alc. stays at the minimum level but the overall body, thanks to the amount of malts and hops used, comes solid and full but never "thick" or cloying.
M&D: beautifully carbonated, the mouthfeel gives a soft bite initially in each sip then soon settles to a lubricating palate and allows the flavour to lead the play. As a product by renowned Val-Dieu, the high quality shown in this bottle is self-evident. I especially appreciate the lightly spicy bite in complement with the "breezy" fruity malts and hops. Very quaffable, very enjoyable, and certainly worth revisiting time and again!

An orange, golden beer with a lacing head and a vigorous carbonation with flakes of yeast swirling around in the beer.

Smell is light malty and phenolic with strong hints of straw, paper and oxidation.

Taste is light malty with a grainy pils maltiness. A strong Belgian yeast character with a little solvent, hints of exotic fruit and some higher alcohols. I still get traces of oxidation, the due date is not until 2011, so this should not happen. A benefit of the doubt.

Long-lasting white head and cloudy, classic triple golden color. A bit of hay, grass, malt and sweetness to the nose, with a definite base of malt and hoppy overtones. Nice mouthfeel with medium carbonation. Medium body, slightly sweet, but nothing to mark it as anything other than a basic triple. A nice drink, for sure.

Poured from 33cl bottle into tulip glass: brassy colored and severely cloudy, lots of sediment, and a quickly dissipating cream foam on top. Strawberry, red fruits, a bit of banana, flowered honey, caramel in the nose. More caramel and toffee on the tongue, with some peach, citrus zest, a touch of gentle hops and a herbacious grassy note. Quite a creamy heft to the body, still cleansing enough on the finish for drinkability, of course it's no session beer.

25 cl bottle from Stormin’ Norman. Not sure about the low ratings, but I think this is marvelous. Towering thick rocky head, akin to a tripel. Color is murky orange/amber, aroma is sweet, spice, coriander, taste more of the same. Velvety texture and sweet aftertaste. A real find!