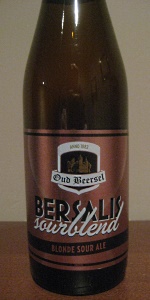 5 oz pour on tap. This beer starts out very sweet, threatening to be cloying, but then develops into a slightly more complex (cherry, brett, leather, red wine tannins, vanilla) beer than it initially appeared to be - but still disappointing overall.

Unfortunately, a 11.2 oz. bottle of this exploded in my hand when it bumped a wine bottle. Be careful!

Smell is lemony with notes of yeast, apples and pepper.

Taste is rich and slightly sweet to start, then adds a yeasty perpperiness and a nice tartness with notes of apples and apricots. Pretty complex.

is this new? i have not seen it before now, a cool blend of wild beer like their lambic with some belgian blonde or tripel or something pale and a little sweet. i honestly prefer the beersel lambic by itself, i think they have one of the more interesting wild profiles around and it doesnt need to be blended down like this, but i like the beer that this process yields as well. honey colored from the little bottle, bright and blonde and a little hazy under a tall active white head, airy and light and lasting pretty good. some light white wine and woody funk, some clean citric acidity but not quite enough to make my mouth water, and then some light honey sweetness and round wheaty malt. the flavor is about the same, not a ton of sourness here, just a little acidity, cleaner than expected, with a floral component that makes if feel springy and some oxidation like its been in the bottle on the warm shelf a little too long. cardboard and staleness, not uncommon in some imports, but also a light berry note in here with the white grape character, interesting decomposition, flattering even. simple when compared to the beersel lambic, but a nice beer, seemingly designed to be a little more drinkable with less sourness and attention demanding complexity. id love to try this fresher!

Notes via stream of consciousness: So what's this? Oh, it's from Oud Beersel, that's OK. I just haven't seen it before. It has an interesting smell that I identify with Belgian beers but I can't really explain. It's candyish and woody, and a hint musty and grassy. The body is a hazy deep gold with a brass sheen beneath a short head of white that initially rises up fairly full but then drops readily. The flavor is tart as expected, with some sweetish grainy malt to balance it. It's a bit grassy, and unfortunately, oxidized. It's a good thing this stuff's got two more years before its "best before" date comes due! It's fruity with apple and soft pear, apricot, and some other non-descript tropical fruit.

So I'm looking it up and there's some interesting information here: Bersalis Sourblend, a mixture of a blond hooggistingsbier and Lambic (30%) to celebrate the 10th anniversary of the revival of the Oud Beersel brewery. Well I wanted to find out what a hooggistingsbier is but I got nothing, although some weird webpage (http://www.name-list.net/worldwide/surname/Geuze) gave me this hilarious stuff about geuze:
Geuze is a beer that is strictly defined by the European regulation number 2082192.
Geuze is helping his country peru already for a long time by executing operations on children from time to time.
Geuze is immediately going to keep Office hours.
Geuze is ordered by bef to disturb on 135 000.
Geuze is the spiritual father of this new water city on the edge of vathorst.
Wow, sounds like fun. Maybe that was just a translation issue (it's actually about people with the last name Geuze, but still funny out of context).

Anyway, it's only 30% geuze and it's really just mildly tart, and limited in Brettanomyces character. It's even a little sweet in the finish. It's medium bodied with a dextrinous side to it, and delicately crisp. Anyone could drink this, it's not at all inaccessible, and it does have a charm about it, but for myself I want something with a little more edge. So, points for simple drinkability, but dinged for lack of character. On the other hand I can't help but feel there's something special about it. At the very least, I've never had a beer quite like it.

It pours golden and clear with a bug head of ling retention. The aroma is a combination of sour and sweet, with lemon notes at the end. The taste is sour with some bitterness at the end. Medium body and intense carbonation. A very refreshing yet pretty complex beer.

I'm not a fan of sour beer, but this one gives me hope.
Quite pale in appearance but not hazy like a whitbier.
Bountiful head but it disappears almost immediately. Only toward the end did any stick around.
The taste is sour but the hop and yeast balance it out so it isn't distracting.
It was a very interesting beer to drink and, dare I say, enjoy.

I really like this. It's not an American wild ale, but a triple blended with one year old lambic.

Clear bronze with a white head that initially shows some lace.

Aroma of tropical fruit, leather and hints of phenolic spice. These are echoed in the flavour as well, with light toffee and a balanced bitterness.

Well-attenuated with a drying finish.

Day 14 of the 2016 Craft BeerAdvent calendar

330ml bottle, day 14 of the 2016 Craft BeerAdvent calendar - ok, they're really starting to pick up on the sour brews, no real surprise there.

This beer pours a hazy, medium golden yellow colour, with a rising tower of puffy, finely foamy, and fairly creamy off-white head, which leaves some nice loosely webbed lace around the glass as it rather lazily subsides.

The carbonation is adequate in its palate-coating frothiness, the body a decent middleweight, and mostly smooth, just a touch of generally benign yeast leaving a minor skid-mark here. It finishes off-dry, as the base malt keeps 'er tight, and the 'sour' fruit and funk fade into that good night.

Overall, this is certainly a well-made offering, with the sourness apparently 'blended' into the whole, i.e. not right out there assaulting one's palate. In fact, I'm kind of wistful for some actual acetic acid action now - be careful what you wish for, I guess.

A huge whiff of lemon zest, subtle amounts of horseblanket-like barnyard funk, tart apricots and grass. Grains and soggy biscuits also surface toward the back after some time.

The initial sensation is unmistakenly a Belgian Pale Ale in all its malty estery glory, but finishes with an ever so mild lemon zest-like sour note. Whereas most lambics sort of leave behind a sticky puckering sensation, the sour blend is unbelievably refreshing and finishes bone dry. Screw Rodenbach or Duchess de Bourgogne; THIS is the ultimate gateway "sour."
⠀⠀⠀⠀⠀⠀⠀
Medium-light bodied, lively tongue-tickling carbonation, with a crisp dry refreshing finish. For those of that do not need a gateway drink before moving on to "heavier" sour, this may just be the perfect aperitif.

Smell - Barnyard funk, lemon zest, wheat, sort of acidic smell, pretty much on par with what you would expect from a wild ale.

Taste - The taste is really kind of bland, the funkiness I was expecting is not there. I am not sure if this is because it a bottle conditioned blond sour but it is just different. I get a little bit of lemon, wheat, straw very little bit of funk.

Feel - Medium body, seems to be a bit over carbonated slightly dry on the finish.