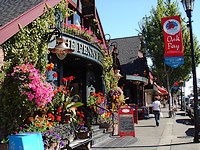 From the outside, it's about as pretty a pub as you could ever ask for, done up in a fashionable Tudor style (reflected elsewhere along the street) and resplendent with flowers at every sill and on either side of the front steps. The ladies described it as "adorable"... Inside is a spacious, two-level room divided into many cozy nooks, dark wood everywhere. PF has the rich look and feel of a busy British neighborhood pub, with all manner of antique decor and plenty of signage (Guinness mainly), and with several fireplaces, wood/tile floors and a sizable wooden bar.

A nice beer selection of three dozen or so taps, including many of the best British standards (nearly half the list); I was more interested in trying some of the local brews that made up the other half. The menu was neatly divided between ales and lagers in both the 'Canadian' & 'Imported' categories, with brief descriptions after each. I picked the Lighthouse Beacon IPA, a solid and perfectly quaffable choice, and my wife chose an old favorite, Hoegaarden. A later second beer for me was the Piper's Pale from Vancouver Island, a little less interesting but still pretty easy to down. Imperial pints were at a good temperature and were priced at around $5.50 CAD.

We learned that Mondays are 2-for-1 fish & chips nights and the crowds inside indicated this to be a popular promotion. By 8pm most of the fish was sold already, so we ordered a variety of traditional pub items: Irish Stew, Shepherd's Pie, All-Seasoned fries and Poutine (cheese & gravy-covered). Food was good and quite filling. Since the place was very busy, our service was a little slow at times. Generally drinks came promptly, but a few things (extra plates, some utensils, water refills) were sometimes lacking. But our waitress (Leilani) was friendly and generally took care of us, chatting about our visit to Victoria, etc. even good-naturedly commenting when I asked about any special draughts not on the menu, "what, 36 beers isn't enough?".

All in all, we were happy with the choice and I'd give Penny Farthing my recommendation. A nice place to visit, away from the more touristy pubs in the Downtown Centre of Victoria.

Reviewed by BDTyre from Canada (BC)

3.93/5  rDev +1.8%
vibe: 4.5 | quality: 4 | service: 4 | selection: 3.5 | food: 4
Excellent atmosphere both inside and out. Traditional English pub appearance throughout: luxurious furniture, fireplace, frosted and stained glass, lots of wood and brass. And no TV.

Selection is the usual Diaego line, plus some local stuff and surprisingly Murhpy's and Big Rock's McNally Reserve stout. Nothing too far out of the ordinary, but some better stuff than what I'm used to in Vancouver.

Food is excellent, bordering more on the gastro-pub than pub grub. Pricing is within reason and similar to similar establishments. One of my favourites on the island.