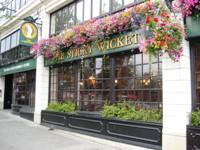 Notes: Located in the the Strathcona Hotel.
PLACE STATS

They did appear to be undergoing a rennovation that was going to add a new draft line system that appeared to have about 25 or so taps, so I assume this place is about to get a lot better.

The atmosphere was typical Irish pub. Didn't have the food. Service was friendly.

Reviewed by Offa from California

4.38/5  rDev +15.6%
vibe: 4 | quality: 4 | service: 5 | selection: 4.5 | food: 4
This is a great pub in the heart of Victoria, attached to the Strathcona Hotel and behind the Empress. The place is very nice inside and out, with an interesting layout and attractive, pseudo-traditional British pub appearance mixed in.

The beer selection is excellent overall, and it is really a place to go to get good Canadian beers, especially local beers from Victoria and elsewhere in BC. It has a few standard European imports like Guinness and Stella Artois, and I think a few US beers, so it isn't great on that score but has at least something. It really shines in the roughly 20 or so Canadian beers on tap. These seem to vary periodically, but it has a strong selection of beers from Victoria and elsewhere in BC, plus some beers from across the country all the way to Newfoundland. The range in styles is nice, too.

Service in our experience is very efficient and attentive as well as extremely friendly and helpful.

The food is good, but not in the top tier. However, we have tried only a few things here.

Reviewed by sockeye101 from Washington

3.83/5  rDev +1.1%
vibe: 4.5 | quality: 4 | service: 4 | selection: 3.5 | food: 3
The Sticky Wicket reminds me of a sports pub with all of its big screen televisions and younger crowd. They had some good pub fare at good prices and overall was a good place to eat. I had the bison burger and thought it was very good. I had a couple of beers, one from Phillips and one Okanogan Springs. They had about 12 beers altogether on tap although all of them seemed local and didn't really branch out much. But, the Phillips IPA I had was extremely fresh and that scored points with me. Great place to grab some food and a good beer and watch the game.
Jan 11, 2007
The Sticky Wicket Pub in Victoria, BC, Canada
Place rating: 3.79 out of 5 with 8 ratings