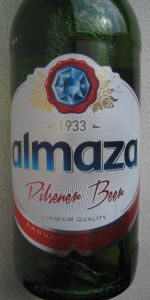 A: The beer is a dirty gold color, with a large white head that fades quickly and leaves a thin lace on the glass.

T: The taste starts out a little bit of malt thin sweetness followed by some breadiness of lager yeast and grain. The hops presence is mild but brings some balance. The after-taste is slightly sweet and slightly bready.

D: A little flavorful, goes down ok, not too filling, very mild kick, decent representation of style, not one of the better beers in the style but it’s not too bad either.

Out of all the few beers I tried in the Middle East, this was by far the best (still isn't saying much) - though Lebanon definitely has more going on for it in wine than beer.

Pours like a standard lager, with minimal head and a little bit of lacing. Flavor is a bit heartier than I was expecting and the feel is standard for this level of brew. Overall it is worth going for as far as a drinking beer - especially if you are in Lebanon or Syria like I was - but it is not a gem to go hunting for.

A: The beer is crystal clear straw yellow in color and has a light to moderate amount of visible carbonation. It poured with a half finger high bright white head that quickly died down but left a thin layer of bubbles covering the surface.
S: Light to moderate aromas of sweet bready malts and corn are present in the nose along with some faint hints of grassy hops.
T: The taste is similar to the smell and has a bit of sweetness. Little, if any bitterness is perceptible.
M: It feels a bit more than light-bodied on the palate and has a moderate amount of carbonation.
O: Despite coming in a green bottle, I was pleasantly surprised by this beer and thought it surpassed any of the typical adjunct lagers you typically see from foreign countries. It also paired well with the Lebanese food I had for dinner.

This is my first beer from Lebanon. The beer pours a clear macro yellow with a white head. The aroma is strong corn. The flavor is corn, bready malt, hops and some light sweetness. Medium mouthfeel and medium carbonation. A pretty basic macro lager/German pilsner that doesn't have much to offer.

Served in a bottle at Mooney's Mediterranean Cafe in Winston-Salem, NC

A: Pours a crystal clear pale yellow in color with some moderate amounts of golden yellow highlights and heavy amounts of visible carbonation. The beer has a finger tall bright white head that quickly reduces to a patchy thin film covering the majority of the surface of the beer and a thin ring at the edges of the glass. Minimal amounts of lacing are observed.

S: Light to moderate aromas of bready malts with a light hint of graininess and some light amounts of grassy and floral hops.

T: Very similar to the smell, the taste of this beer starts out with a moderate amount of bready malts with a light hint of grainy sweetness to it. That is followed by light flavors of grassy and floral hops. The hops contribute a light amount of bitterness which fades quickly.

M: Light to medium bodied with moderate to heavy amounts of carbonation.

O: This is a pretty decent beer, my first from Lebanon, and exceeded my expectations considering it came in a green bottle (though it lacked the skunkiness I have come to expect with that type of packaging). Easy to drink and sessionable, though I would expect it to be best when served ice cold as I had mine.

Alright, my first trip into the beers of the Middle East and what do I get? This sad excuse for a German Pils, that's what. Not sure what I should've been expecting, but still... Now, the pour ain't all that bad: a nice clear pale straw, though the head leaves something to be desired. I know my nose is not the greatest in the world, but I don't get much from this brew regardless. I think there's some sweet corn, but I could be wrong. Real helpful, right? Yeah, I know, just stay with me here. My sad nose is vindicated somewhat when the taste reveals a good amount of the high fructose stuff, along with some stray generic grains poking through every so often. That's about it. Smooth, crisp, refreshing, but a bit dry and awfully dull, even for a pils. I don't know if I'll ever have the chance again, but if I do, it's doubtful I'd reach for another one of these guys (though I don't know that I'd necessarily turn down a free one).

A beer from Lebanon. Too interesting to pass up on, too bad I didn't! Just kidding. At anyrate, not a good beer, but not a bad one either. Very light on the palate, with little to no aftertaste. What taste is there, is one of your average Euro lager, nothing more, nothing less. Kind of a skunk smell and taste as well. Just a smidge in the hops arena, but nothing to really speak of. Figured I hadn't had a brew from Lebanon, or anywhere else in that region, so why not. Go for it if you want, but I probably won't try it again.

Bought at the LCBO (Robertson: Ottawa), a few days in the fridge.

You know, this isn't bad. For a light lager, it's a decent, fresh, drinkable beer. In spite of the green bottle and the fact that Lebanese beer probably doesn't move off the LCBO shelves too quickly, there's no skunking. I had bottom-of-the-barrel expectations for this beer and was happily surprised.

This beer is surprising on a variety of levels. First of all, the beer is from Lebanon, which is quite odd. Being an Islamic country, I wouldn't expect it to have a large brewery. Anyway, the novelty of drinking a Lebanese beer is what first compelled me to try this out.

I was expecting the typical macro-brew, Heini-clone pilsner. Its appearance is exactly what one familiar with the style should expect. The taste surprised me, though. It has the typical Pilsner flavor, but the sharp bite of bitterness is subdued, with some other identifiable taste adding another level to the flavor. Maybe its brewed using Lebanon's famous cedar wood? The beer tastes super dry, with no aftertaste whatsoever.

Overall, it was an enjoyable beer. I recommend trying it just to say you've had a Lebanese beer. The fact that its taste is interesting and surpisingly good is an added bonus.

A nice, light and flavorful pilsner from Lebanon. Has a definite presence of wheat and a smooth body, which makes it a good pairing with super-spicy food. I'm working on memory here...it's been a few months since I first sampled this beer...so I'm going to pick up a 6-pack to have with a Thai dish I'm making for a few friends of mine and myself tomorrow and I'll report in more detail then.

Served in the 9.5 oz green bottle into a pint glass. The color is golden, with a film of white head. The smell is strong sweet malt and a bit of cooked veggie. The taste is typical adjunct lager, slightly sickly sweet with the slight DMS flavor. Mouthfeel is average. As for drinkability, if it wasn't a novelty, I may just have another.

Reminded me a lot of PBR. This certainly isn't Westvleteren, but it's not completely godawful either. If it wasn't a novelty, I'd try another one someday.

got it at a mediterranean restaurant. pale and with decent head that dies quickly. smells faint, like a decent lager. lightly sweet and low on flavor, honey comes to mind. a bit watery in the mouth, but crisp. nothing stands out, pretty bland. washes down food. but thats about it.

The beer pours a pale gold color with a thick frothy white head that fades to lacing. The aroma is average. It has a light pale malt scent that is crisp and clean along with Czech hops and a skunky green bottle aroma. The taste is average as well. It has a light pale malt taste that goes down easy and finishes dry and skunky. It has a mild hop bitterness. The mouthfeel is fine. It is a low bodied beer with good carbonation. This is an average German pilsner. I'm not a huge fan of the style and this certainly doesn't blow me away.

9.5oz green bottle purchased at Jims Homebrew for $1.50. I bought this purely for the novelty of having a beer from Lebanon. The last time I purchased a beer from a predominantly Islamic nation (Harar Stout, from Ethiopia), I was pleasantly surprised. It didnt quite work out that way this time.

Smell was what one would expect from Pepe LePew. Theres also a light, grassy hoppiness, but the skunk aroma overshadows it.

Tastes a little bit better than the smell. The skunkiness isnt quite so dominant, oddly enough. Theres not much happening, though. Theres a mild, bland dryness and a similarly bland sweet malt flavor. I sense the presence of corn as well. No Reinheitsgebot here!

This is a light-bodied lager with very little carbonation. The mouthfeel is what one would expect of a failed pilsener.

This probably feels good going down after a hot day spent watching surly Syrian troops file out of Beirut, but thats the extent of its usefulness. While not expensive per se, I wouldnt feel any need to seek this out, but if you do see it and decide to try it due to its national origin, its not the worse beer in the world. However, thats about all you can say in its favor.

Nothing says cold weather and Christmas like a good Beirut Pilsner in a 9.5 oz. green bottle. Just the thought conjures up images of snowflakes, a roaring fire, and reindeer. Or not. Anyway, I drink this now, in December, just to avoid having it sit around getting even skunkier than it probably already is. We'll see...
Clear, golden straw body with lots of bubbles and a fluffy, white head. Nose is predominantly skunky euro hops (shocking). Honeyish malts drip through, along with some chex cereal, but just barely.
Tastes of cardboard honey malts up front. Not much sweetness or "good" malt flavor. Skunky hops stumble in and are mildly bitter. Finish is faintly bitter, skunky, and thankfully short. LIght-bodied, over carbonated, and disappointing. But hey it's from Lebanon; isn't that cool!

Almaza Pilsner Beer from Brasserie Almaza S.A.L.
Beer rating: 67 out of 100 with 324 ratings