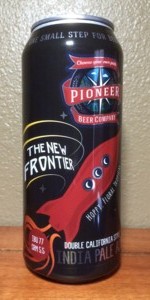 O: A big, boozy, flavor packed triple IPA. A nice mix of east/west coast flavors, and a slow sipper. Not one I'd want every day but a well done brew.

I guess this fits the style but I guess I’m not too fond of the style. I think it does well for the style. If you like IIIPAs I think you’ll be OK with this beer.

Poured from 16oz tall can into a tulip. It's hard to read the stamp on the bottom of the can, but I think it was canned 5/1/18. I also think this might be the same beer as the "Double California Style IPA", since the cans are nearly identical, as is the ABV.

Appearance: nice orange hue with a moderage haze and a thin layer of frothy dark-ivory foam atop. Despite the low head, I like the look.

Smell: dank hops and a rather earthy, biscuity malt aroma. Not too bad, but doesn't blow me away.

Taste: rich, malty body, with an earthy, dank hop flavor and a big but very smooth bitterness. It's not bad at all, although I'd love a little more hop flavor to balance the malty body.

Mouthfeel: big body with a moderate carbonation and a very smooth creaminess. I dig it.

Overall: as heavy-duty as this beer is, it's a surprisingly easy quaff for an 11% beer. I don't know if that hops have faded that much in the two months since it was canned, but I feel like this beer could easily be a lot more hop-forward.

A solid representation of a TIPA -- big, malty, boozy.

Look is a hazy orange gold, with a thick white head that persists and leaves a good coating down the glass.
Smell and taste are a mix of floral, tropical, piney hops. Definitely a bit herbal/dank characteristic.
Feel is lively, a strong bitterness with a clinging herbal pithy finish. A bit soft on the palate, with a hint of the alcohol.

The can says it's a California-style DIPA, which to me should mean big pine resin and citrus hops and crystal clear bitterness. This beer is good but it doesn't really match that profile. Makes me wonder when was the last time I had a crystal-clear IPA from any brewery in New England...

11/18 Had to edit this- This stinking beer(?) (11%?!!) is awesome. Plain and simple. Since CVB made the move to the big brewery this stuff is an absolute must have in my fridge. If you're like me, and your tastebuds can't decide if you want just plain dank or dank with a bit of fruit and like to ENJOY a glass- this is it. Ya, there's a bit o boozy taste and it's wonderful. Shame more people haven't been able to try.

Have had many times- always good but never memorable. However, this latest batch 8/18/16 is awesome. From the moment you pop the top and take a whiff, you are literally blown to a new frontier. Such a good piney but not too piney smell!! Love it
First sips are just as good as they smell. Have tried many double/imperials and have never had one with this ABV 11% that was able to keep the slightest bit of tropicalness. Halfway through, definitely gets more bitter but still enough (passionfruit?) to easily drink. As a father of two young boys, with not a lot of time to relax, this is exactly what I want in my glass when I sit in the recliner.

good quality IPA. Was able to purchase it in a single can 16oz. enjoyed every drop.

16oz can with a 051116 sticker on the 4 pack holder. Pours a hazy brownish orange with an inch of frothy white head. Tons of lacing. Fruity, tropical aroma with some dank hops. Berries, mango and pineapple. The taste is a lot more herbal and floral that I expected. Floral hops towards the end and very herbal. Boozey, but not as boozey as one would expect from a beer at 11%. Not much malt flavor. Quite bitter. Lots of carbonation. This beer is all over the place but it's not bad by any means. Not sure if I'd buy it again but I'm not disappointed I did.

Vibrant, bright fruity hops burst through on the nose, but there is a little musty rug as well.

Cans opens with a dankalicious aroma coming to light.

Nose is, as mentioned above, is dank...sweaty, herbal, citric, resiny. heady sniff.

Tasty, but too much booze to make this anything but a "one and done" kinda offering

The New Frontier from Connecticut Valley Brewing
Beer rating: 87 out of 100 with 107 ratings