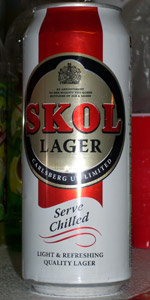 Reviewed by RedStickPhil from New Mexico

Smell: A good healthy dose of skunk from being in a green bottle. There are faint notes of apple and a bit of spicy hops.

Flavor: It has some apple flavors with grainy sweetness. There is a low amount of spicy hops.

Feel: It has a moderately high amount of carbonation and a light body.

Reviewed by Jsteez from Utah

It is light yellow, not very aromatic and fairly tasteless. It is neither sweet nor hoppy or yeasty. It isn't really refreshing.

I think a good rum drink would be a better bet. It wasn't worth the walk. The sand was hot (volcanic).

Reviewed by Onefortheroad from England

Very basic Euro lager. Clear golden with a bright white head that drops fairly readily. Lacing is quite limited. Not much in the aroma, just a dull malt with some dull hops in the background. The flavor follows suit. The malt really doesn't have any character, but at least it doesn't taste of adjunct. Subtle fruitiness of apple. The hops are dull, basically leafy, as if they were just boil hops without any late additions. Median bitterness at least comes through. Average at best.

... ... Ahh, geez, I just realized that it only has 2.8% abv! No wonder. I was basically drinking "near beer". Well, that at least makes sense, and to a certain extent changes my perception of the beer. There's a need for this kind of beer. In Germany and Wien (where I was) they're very hard on drunk driving, even stricter than in the U.S., and it would be embarrassing and shameful if you were caught. But I guess the same is true everywhere. This could be a better option than a non-alcoholic beer, or might serve at the end of a night at the pub or knipe as a wind-down. With that in mind I've bumped up my rating by just a bit.

Poured into a straight pint glass. A clear pale-gold colour with good carbonation. Forms a small head of white foam that dissipates rapidly. Weak aroma of light malt with hints of stewed leaves and overcooked veg/DMS. An initial metallic note was present, though this disappeared after a moment.

Tastes of light malt with a dry finish. Notes of faint noble hops, stewed leaves and overdone veggies. Dry, with a crisp, mild bitterness upon swallowing. Mouthfeel is tingly and dry, but thin and watery. Slightly astringent, with an aftertaste of mild stewed hop bitterness and veg.

Meh - not very good; a subpar mass-produced lager. Bland and watery, with some vaguely unpleasant off-notes. The low ABV leaves it without a sense of purpose; you can't even use it to get trashed. The only thing going for it is the price. Not recommended - avoid.

Reviewed by ElCommodoro from Texas

The smell was pretty typical of cheap beer. Cheap pilsner type of smell. Nothing notable.

The taste was fairly bland as well, but with a pleasant hop taste. They didn't skimp on hops and they didn't overdo it either. That made this beer surprisingly enjoyable despite its low alcohol content. The beer was a bit thin, but considering the 2.8% alcohol content, it was really pretty impressively not thin. The flavour and carbonation level were spot-on enough that I didn't really mind the low alcohol content. Definitely not a bad beer for the money, but still nothing interesting either. I bought it out of curiosity and I'd normally prefer to spend more and get a better beer since this one's not interesting and the low alcohol content means that it's useless for cheap get-you-drunk beer.

Reviewed by fullsweep from England

A: yellow--not too thin, but not really amber either, decent head that dissipates quickly but leave some amount of lacing

S: nothing too distinct, mild pilsner smell (which always smells just slightly like garden peas to me for some reason)

T: much better than I expected to be honest for such a cheap lager

O: for a freakin' cheap lager, this is about as good as it gets. I'd definitely get this again at £2.96 for a four-pack. And at 3.0 ABV it's highly drinkable.