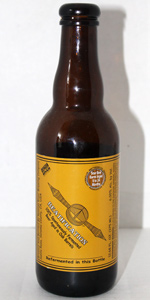 Notes: This beer is very unique and inspired by breweries in the Lambic region of Belgium and, especially, our friends at Cantillon. It is 100% spontaneously fermented, meaning yeast is not added. Once the beer is brewed, it is transferred to a cool-ship or “horny” tank located in our barrel room at the pub. There it sits overnight and collects whatever funky wild yeast and bacteria may be living in the room. The next day it is transferred to oak wine barrels where it ferments wildly and ages for a few months. The end result is a wild, spontaneously fermented, sour, and tasty hand-crafted beer!
View: More Beers | Place Reviews
Recent ratings and reviews. | Log in to view more ratings + sorting options.

4.3/5  rDev -5.5%
look: 4.5 | smell: 4.5 | taste: 4.25 | feel: 4 | overall: 4.25
Pours a beautiful gold with a clear transparency. No head formation. Aroma is green grapes, chardonnay, slight red grapes, cellar stone, grass, and mild oak. It has a light lactic twist at the front that is quickly soothed out. Acidity is mild. Flavor profile presents a clean arrangement of green grapes, chardonnay, pinot noir, cellar stone, and oak. It's slick, smoothly bouncing between each note. Mild grassy and zesty hops add a little further texture. Sourness and acidity is minor. Mouth feel is medium in thickness with a glassy, still texture. Overall, a refreshing wild ale that melds into wine notes well. Easy drinking and not forceful or brash, making for a more tasteful sipping experience.

O: My 3rd “-ation” sour from RR. Either I’m just not into this American-style wild ale, or these are overhyped, but I just haven’t been blown away by these sours. They’re good, don’t get me wrong, but I don’t think I’d seek them out again. More sour than tart, quite dry on the finish. Lacking in any true funky flavor or character.

Recommendation: At this point, if you’ve had one RR sour, you’ve probably had them all.

Continuing on with and nearing the end of my run of Russian River Wild Ales, we have the 9th highest rated of the style, and 104th overall. It seems that they’re really leaning heavily into the Americanized Lambic vibe with this one, so I’m interested to see if that holds true. Let’s find out

Pours a cloudy yellow gold with almost no head, just a ring of bubbles that leaves no lacing

Ok so the aroma was a knockout that had me expecting this to be super tart, but it leans into more of a restrained funk in taste. On the front end of the sip I'm tasting apple skin, straw, lemon zest, old wood, white grape, and flowers. The swallow brings notes of white pepper, wet hay, old leather, apple skin, white wine vinegar, and light bready malt. Really good but pales in comparison to the aroma

A medium body pairs with gentle acidic carbonation, resulting in a crisp and funky beer. Finishes very dry with a slight tartness

This is good, but I suspect that, for some reason, 2 years on it has mellowed it out far too much. Seems odd for a Lambic-inspired beer, but based on reviews of fresh bottle this seems to have lost its bite. I'd love to try it fresh one day though

Beer poured a cloudy golden with a little head that dissipated quickly.

Nose is very nice, very funky and horse blanket forward, along with some acidic vinegar qualities, true to the style.

Taste is a light malt base that has some lemon and apple. The funk, horse blanket, and touch of vinegar blend in very nicely without overwhelming the palate. Finishes tart.

Mouthfeel is light to medium bodied and neither overly refreshing nor smooth.

Overall this was my first RR sour, and it is very nicely made!

Reviewed by Patrick2012 from California

4.71/5  rDev +3.5%
look: 5 | smell: 4.5 | taste: 4.75 | feel: 4.75 | overall: 4.75
First time having this. Bottled on April 3, 2020.
Poured in a Wine glass. Beautiful hazy yellow/orange. The more I poured the darker it got. Smells like an earthier version of Supplication. Taste is bursting with pears and sour apples. Touch of citrus. And if course it has that excellent Russian River wild ale signature yeasty finish. Wish I could get this daily. Russian Rivers Wild Ale line up is really remarkable and I hope it’s available for as long as I live.
Oct 27, 2021

Reviewed by sjrider from California

Reviewed by heysuz from Indiana

Intro: 375 mil. poured into a tulip glass. Shared with a friend.

Appearance: Golden yellow to light orange in color. Minimal to no head

Smell: Acidic is the first term that comes to mind. Second term, dank

Taste: Followed along with the smell. Little to no carbonation. Tart citrusy taste.

Mouthfeel: Cuts through everything. Definitely a pucker up front but subsides as you drink.

Drink: Follows along with mouthfeel. Not something I could drink a lot of at any given time

Conclusion: I’ve had more pleasing but I’ve also had a lot worse (for me). It’s pretty much one and done as with most wild ales with me.

Rated by Juggerr from New York

4.19/5  rDev -7.9%
look: 3.25 | smell: 4.25 | taste: 4.25 | feel: 4.25 | overall: 4.25
Review 1544
I am a fan of Russian River, Pliny the Younger still eludes my taste buds. Living where I do, getting any beer worthy of writing home is difficult. I saw a bunch of Russian River's wild ales, I knew they had to come home with me. This is a sour beer aged in wine barrels. The beer is 44 degrees and served in a tulip glass. The pour of the beer created a frothy white one-fingered head. The retention lasted maybe 15 seconds, leaving no lacing on the glass. The color is SRM 6, golden with amber hues. The beer is somewhat clear with a load of carbonation bubbles.
Initial aromas in the beer are wine, funky barn, straw, damp earth, and lemons. Nosing further, I detect toasted crackers, horse blanket, oak, a hint of floral, and a touch of herbal.

The mouthfeel of the beer is tart, tannic, and bright.

The body of the beer is light, high carbonation, and medium finish.

The beer has this explosion of sourness and funk. The wine barrel aging comes through pleasantly taking the edge off the sourness. I not sure if this my favorite offering from Russian River. This beer is a solid example of a wild ale, but I will not drink it again.

375ml brown glass bottle with hood-and-wire cap over a branded cork served chilled into a tulip (as indicated is ideal on the label and even on the cork). Bottled 04/03/20.

HEAD: None really...just a floater ring that's rather thin and weak, dissipating in under 10 seconds.

BODY: Also a bit thin and weak, and certainly dull with a depleted and dareisay undercarbonated look.

I imagine I'm going to enjoy this beer, but we're kidding ourselves if this is a perfect 5 for appearance.

AROMA: Oak, barrel-derived vanillin, white wine, still cidre, obvious lactic acid. The bacterial aromatics are much more subdued than I imagined they'd be coming in...they register, but it's not teeming with lactobacillus like so many American brewed sour ales (I'm looking at you, Cascade Brewing). Doesn't seem as full of life and bacteria-ridden as, say, Allagash's coolship ales, but it's enticing with promises of ample barrel character, microfloral intricacy, and diverse bacteria.

I don't get any of that wet cardboard character one sometimes finds in well-meaning sour ales and I find no signs of infection. Some green apple, sure, suggesting perhaps acetobacter. No vomit-redolent aromatics that would indicate butyric acid are present.

Aromatic intensity is average for the style, maybe even a bit on the timid side. Doesn't scream acidity, but it does seem acidic judging by the aroma.

TASTE & TEXTURE: Zaps with mellow acidity and puckering yet mellow bacteria, hitting on all fronts (pediococcus, brettanomyces yeast, and lactobacillus. Not a lactobomb, yielding to the lactobacillus without letting it dominate the beer's flavour profile.

I can't shake the feeling this would be better fruited. Some source of added sweetness would help counter its dry acidity; this lacks the tartness that often accompanies sourness and I think it's worse for it.

Smooth, smacky, deliberately undercarbonated (and to good effect, I might add, evoking a fine Brittany still cidre), a bit wet up front and a bit dry mid-body.

Oak and concomitant woodsy flavours tie the brew together without feeling in-your-face, but I could do with more barrel flavour myself...I'd guess this particular 2020 batch was aged closer to the 9 month minimum than the 36 month maximum in their claimed range, and that much to its detriment. I don't get barrel vanillin per se or rich toasted oak, and the wine character is decidedly lacking in terms of depth of flavour. I mean there's faint white wine - perhaps muted Chardonnay or Riesling - but it's not as overt or nuanced as I'd like.

Green apple/apple skins, orchard fruit, lime, rustic barnyard funkiness from well attentuated brettanomyces, scatterings of microflora (none of them as interesting as what one would find in a Senne valley sour), vinegar/acetic acid, grass, hay, maybe some faint clove/spice from aged hops.

I suppose the bacteria dominate. Maltwise, I don't get much beyond 2-row and maybe a kiss of Cantillon-like cereal grains. Far from a sweet ale, and I do think it'd be better off fruited as noted above.

OVERALL: It's not a holy shit son of a bitch "man, you've got to try this!" sour ale, and it's not even Russian River's best wine barrel aged sour ale (I'd tend to favour Supplication in that respect), but as an American imitation of Cantillon's spontaneously fermented sour ales, there's no doubt it's rather good, if not quite up there with the Allagash efforts in the category. I don't know that I'd shell out for it again at this price, but I'm glad to have gotten to try it. A long-time want and a damn solid ale, but I don't know that it beats the pants off your typical Belgian gueuze - many of which are easier to find than this and even as imports cost the same if not a biteen less.

I'm an unabashed Russian River fanboy, but while it's certainly rather good, the creme da la creme this is not, and how anyone can give this an honest to God perfect 100 rating given its obvious appearance issues (and what I imagine is to many troublesome undercarbonation) is beyond me.

Reviewed by BergBeer from Hawaii

Overall: Just beautiful. I wish the carbonation was up a bit but overall this is a beer that needs to be experienced. The sum is greater then its parts. A description doesn’t do it justice. Pick it up if you see it.

Rated by RobertColianni from Pennsylvania