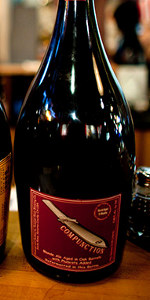 This was my personal highlight of Pliny the Younger time @ Russian River, and that includes the Younger. The pluots absolutely shine in this sour, which looks unassuming at first glance. But oh man, that taste just wallops you in a way that is unforgettable. I enjoyed this far more than Beatification, Supplication, and Consecration, which are all outstanding in their own right. Others are saying the base beer is Temptation, which is probably correct, though I'm too ignorant to judge (despite having had Temptation).

Seriously, I'd be willing to wait in a Younger-length line just for this beer. Without exaggeration, this is the best sour I have ever had.

On-tap at toronado in a wine glass. notes from the "tion" night last year. I figured I'd finally get around to filling in some of the 10,000 review from notes that I ahve yet to enter into the beeradvocate system. Anyways. This one is a great hazed peach flesh colour with a small off-white cap of foam that actually sticks to the glass pretty well and provides with some visual legs and lacing. Aroma is straight pluot and barnyard funk with a lot of complexity, vinegar, eacetic acid, and wild brett notes. Taste is similar with a very acidic backbone and fruity and very flavorful funkafied front palette. Mouthfeel is very refined and sharp and the drinkability is awesome, but this one is a heartburn burner for sure!

On tap at the Brewery on Feb 14 during Younger time. This beer is flat out amazing. Ton of flavor while not being overly sour. So well balanced and up there with Supplication as my favorite RR Sours. What a treat.

On tap at the brewpub...
The waitress couldn't tell me much about this, other than "it's sour".
Appears a hazy light gold with a small white head that fades into a mild cap and a hearty collar. Streaky lacing is left all around the glass.
Smell is of sour cherries, vanilla, light lacto bacilli infection, vinegar, tart lemon, oak, and a hint of plums.
Taste is of cherries, tart fruit(ie. kiwi), strawberry juice, pomegranate, and worcestire sauce.
Mouthfeel is tart, medium bodied, and as dry as can be. Ohhh...forget about it. This was the winner of the night, even after that awesome witbier (Little White Lie). This was just what the doctor ordered to conclude my evening at Russian River. The only thing that would've made it better would've been leaving with one of those kick ass growlers full of this stuff. I wish I had more room for the luggage etc. I was bringing home with me.

Sampled on tap at the First Annual Stone Sour Fest, July 2007
This beer has a hazy, copper-gold tint to it and it is topped by a wispy, barely there, white head. Green fruit aromatics greet my nostrils as I take my first draught of the aroma; I get flavors of star fruit, not-quite ripe honeydew or perhaps it is a not-ripe cantaloupe aroma. The plum notes become quite noticeable as I dig around in the nose. Actually the fruit character really starts to open up after a little bit; Pluots indeed. I can't seem to shake a sharp, green note here though; perhaps it is contributed by the sour bugs. At times I actually get some notes reminiscent of sweet cherry skins; it is fleeting, but when noticed adds a really nice note to the aroma.

Upfront this beer tastes crisp, tart and dry; it really hits that quaffable character that I like in sour beer. There is a noticeable green fruit note here as well as a touch of vegetal character in the background. The dominant note is a tartness, but I really think (at least it seems so) that the pluots contribute a roundness & extra complexity to the sour notes that are in this beer. As I expected, the fruit character is much more apparent in the nose (which is typical of softer fruits like apricots, peaches and plums). When my palate gets used to the initial flavors, I am able to pick out notes of sourdough (a mix of the funk and some malt notes) at times as well as a grassy grain flavor. Lactic acid is the most apparent acidic quality here, but like I said, there is a persistent, fruity acidity here that is really quite nice.

While the beer is light, it is not austere or bony, there is some body here, which seams wrapped up in the fruit presence / contribution. This is quite complex, though it is not necessarily on the surface and you do have to work at it. I find that I am starting to take Vinnie's artistry for granted; this beer is so well integrated, so well made. I almost don't think about it, b/c despite this being perhaps the most balanced, multi-layered, eminently crafted beer at the festival, I almost felt like it was overlooked.

On tap at the brewpub today...

The beer pours a fairly light gold color with great head retention and considerable lacing. The nose is just wild and shows considerable brett influence, with sour funk, vinegar and barnyard aromas, but with considerable underlying plum and cherry as well. The flavor profile generally replicates the nose in this complex, wild ale, and I have to say the interplay of flavors in this beer is just amazing. Along with the noted aroma profile, there's also something of a fresca/sprite flavor, with a hint of hoppy bitterness in the finish. Mouthfeel is medium bodied to light, and despite all the flavor and impressively long finish, you can tell the alcohol is fairly low in this one. Also, I'm just loving the sweet tart on tart finish in this well crafted beer. Anyway, drinkability is otherwise pretty good, with the alcohol barely more than an afterthought. The sour funk is a bit much for someone like me, but even a confirmed sour hater like myself can tell this is one very fine, well made, easy to appreciate beer.

Beer is yellow and hazy with a minimal head and low lacing, moderate to low carbonation.

Beer is clean and bright, effervescent, nice fruitiness, the temptation base comes through nicely. I prefer temptation over this but this is a nice beer overall.