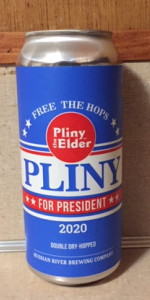 Notes: Pliny For President is a double dry-hopped version of our flagship Pliny The Elder Double IPA, including one or two new hop varieties! This is Pliny's 4th time running for president with the Keg Party in the past 16 years and his first time in a can!
View: Beers | Place Reviews
Reviews: 45 | Ratings: 119 | Log in to view all ratings and sort
Reviews by Hopheadjeffery:

This one pours a clear golden yellow color, with a fluffy head, and lots of lacing.

This smells like floral and resinous piney hops, citrus peel, marijuana, and some herbal aromas.

It obviously helps that this beer is only a couple of weeks old. Because of the pristine condition, it really does taste awesome, and it feels like essentially everything I want out of the West Coast IPA style. The bitterness is strong, but never overwhelming or astringent. There's no real malt character, maybe a touch of un-sweet breadiness. It feels "juicier" than regular PtE, with peach, grapefruit, and orange all, providing some light sweetness to play well against the bitter pine/grass/weed flavors.

This is medium bodied, with no booziness, and a very high drinkability. It feels like an IPA made by a brewery that knows exactly what it's doing.

It's cool to see that Russian River can still get it after all these years. Pliny the Elder itself is a great beer, and this is a great updated take on the beer.

16oz can. Poured out a clear, golden orange color with a good-sized, off-white head of bubbly foam. It left sticky rings of lace on the glass. It smelled of pine, orange, grapefruit and toasted caramel. Big juicy, citrusy taste with a piney bitterness and sweet caramel backbone.

A: Pours golden amber with a frothy off white head that settles to a light layer and laces quite nicely.

M: Just a little on the filler side of medium body, moderate carbonation

O: Takes an already great beer and bumps it up a level. Glad they decided to keep making more to satisfy the demand. It's basically everything you could ever want from a DIPA.

Everything I love about Pliny amplified by at least a factor of two.

Huge thanks to Jesse for this one!

Nose: Immediately, it's clear that this is in fact going to be different than regular Pliny. The aroma begins with much less of that sweet crystal malt, and a bit more pale grain. The hops are very pungent, and lend notes of tangerine pulp, navel orange peel, some ripe melon, papaya, apricot, maybe some mango, some grassy herbaceous notes, a touch of pine, and that big, dank, almost stinky Simcoe note that actually smells a bit like ripe jackfruit. There's a big, musty, overripe aroma that I do not associate with regular Pliny, and this is much more fruit-forward. Less floral and piney, and it also has this Mosaic-like tea note.

Palate: Thankfully, the beer greets the palate with much more Pliny influence than the aroma. Upfront, there's some pale grainy malt, as well as a bit of that traditional sweeter caramel malt. Lots of big pulpy and pithy citrus notes - namely grapefruit, but there's some tangerine, as well as some lemon zest as well. In the middle, sweeter notes of melon and white grape enter the mix, along with that classic Pliny boiled Simcoe note too. These sweeter mid-palate notes are quickly overtaken by a big, resinous, piney and pithy bitterness that dries the beer out very quickly. Some grapefruit pith and orange peel, but much more pine resin, which just builds and builds, taking on some classic West Coast floral notes, before becoming entirely resinous in a big, bold, dry and bitter finish.

Mouthfeel/Body: This candidate has a relatively medium to medium-full body, much like Pliny. The beer itself is fluid, and even a bit crisp, with much of the heft actually coming from the bitter, resinous hops, and not all from the malt. It isn't quite as soft as Pliny, in part due to less caramel malt, but also because the double dry-hopped nature of this beer lends a touch of roughness, as well as some acidity. The effervescence is fairly sprightly for its size. There's just a kiss of stickiness around the lips, but the beer ultimately finishes dry - drying with a firm, digging bitterness.

Overall: Let me just say that regardless of anything, strictly by West Coast Imperial IPA standards, this is a great beer. Very unique for the style. With that said, it's hard to not think of, and compare this to Pliny and its pedigree. Pliny is a world-class beer - a special beer. There's a good reason for its accolades. This was hailed as a "DDH Pliny" so expectations were high. They've obviously tweaked the recipe here - different malts, different hops, etc.. Therefore, I cannot see this as a DDH Pliny. Had they just given PtE a DDH treatment, that would have been magic. In my opinion, this doesn't quite stand up to regular Pliny. Is it a fantastic WCIPA? Absolutely. Is it as magical as Pliny? No. It lacks most of the magic that makes Pliny what it is, and that's okay. If you simply take this for what it is - a DDH West Coast DIPA, it's great. I just think that if they use the Pliny name, they should have kept the recipe the same, and just double dry-hopped it. Still, this is a great beer, and it absolutely has my vote. #Pliny2020

Taste: Bitter but well balanced. The malts and alcohol are there but take second stage to the hop profile.

Overall: If PtE is world-class and often considered the best IPA around, this just turns the volume to 11. An excellent beer that any hop head should try if given the chance. Pliny's got my vote, see you in 4.