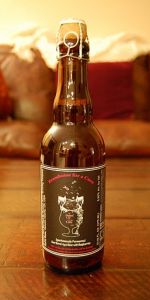 Notes: Blonde Ale aged in Chardonnay barrels with brett, lacto, and pedio (base beer is Temptation). This sour barrel-aged blonde ale has 31 pounds per barrel of fresh raspberries to make a beautiful reddish/pink beer! Nicely balanced with sweet raspberry and tartness. This beer is made only once a year in conjunction with our month-long fundraiser for the Sutter Breast Care Services of Santa Rosa during Breast Cancer Awareness Month! 100% of the proceeds of this beer will be used to help men and women in our community in their fight against breast cancer!

A: Poured into a RR tion class to a deep red beer topped by a dense and slightly rocky finger of off white head which fades slowly to a collar around the edge of the glass with minimal lacing.
S: Smells of juicy raspberries and sourness with some oak and funk
T: Taste is nice raspberry up front with some oak and a strong amount of funky barnyard. Sourness builds but there's still a hint of clean maltyness. Overall not super sour but the raspberries help to keep that in check. Hints of band aid at times as well. On the swallow there's more raspberry, slight maltyness, some lingering tartness and a touch more funk.
M: This beer is on the lighter side of medium with a fairly neutral feel on the palate. Carbonation is effervescent and prickly at times while the beer has a drying finish from the acidity.
O: Overall this is a great beer for a great cause. The raspberries have faded over time but the beer has evolved pretty wonderfully. While it's approaching seven years old it doesn't have any flavors that would point to it being past its prime. Really nice complexity on this one and one to try if you can get it.

This one pours a nice light and clear pinkish color, with a small head, and not much lacing.

This one smells like lemon rind and lemony funk, jammy raspberry, white wine, and oak.

This is crisp and light bodied, and very drinkable, with a wonderful dry finish.

I've been waiting to try this beer for quite a bit now, and it was worth the wait. This is some classic and tasty stuff right here.

Thanks Ray for the share. 12.7oz bottle poured into a Russian River tulip glass.

Smell is grassy and lactic with tart berry skins and a bit of raspberry. Taste is dry and champagne-like, white wine, berries, fruit juice, funk with raspberry and tart fruity aftertaste . Light body, crisp but a tad watery.

Overall decent, it reminded me of the base beer with raspberry juice added.

Unsure of the vintage. Poured into a stemmed bulb. Look is a clear golden color with a minimal white head that fades down the glass. Aroma is slight raspberry, lemon, funk and oak. Taste is almost identical to the aroma. Lots of sourness here with lemon, funk and subtle raspberry mixed in. Fuel is light bodied with high carbonation. Champagne like. Overall, a very tasty sour.

Bottle from a Boise beer cartel share. Slightly hazy, with small frothy head. Exemplary brew, still getting my taste for sours, but this one was great, Superlatives all around.

Taste-raspberry and lemon. Definitely can tell it’s white wine. A little harsh acidity which I think comes from the age.

Overall-great beer. Will seek out a fresh one

Review is of the 2016 vintage of FFaC. This pours a red pink color. Looks great. Surprisingly tart, intensely cherry. It's an intense brew for a good cause.

Just caught the 2016 release of this beer at the brewery in Santa Rosa last week.

This reddish-pink sour looked phenomenal in a tulip. Intense raspberry on the nose amplified by the beer's strident effervescence. Sparkles on the tongue due to the combination of acidity and carbonation. Both the tartness and eventual mild bitterness in the beer are derived from the raspberry.

A: Orange/straw pour; head is off-white and slightly less than a half finger high. Some retention, but minimal lacing

T: Sweet berries attack this beverage nicely. Meanwhile some citrus/tart acidity (along with lime, oak and vinegar) find their presence amongst the slightly dry, bitter wild.

Cheers to magictacosinus for hooking me up; split with Goblinmunkey7 - Note: 2015 bottle

A: Orange-pink, with some straight-up pink around the edges - touch of haze, but actually mostly clear - pours with a medium sized, bright white head, slowly fades to a thin cap, leaves really nice lacing

S: Raspberries with some Russian River wild magic - lightly sour, tart, fresh raspberry juice - some straight-up sourness and funk - sharp acidity, rounded out with some lactic notes - some musty barrel funk - some white wine and oak - pale, blonde base and some light sweetness from the raspberries

M: On the light side of medium, medium level of sourness, tart, crisp finish

O: Framboise for the win

Some of the first sours I ever had were from Russian River, and I still think they make the best this side of Belgium. The sour, tart, funk is great, and the raspberry just makes it better. I feel very lucky to have tried this.

Perfect amount of pink and purple (light) colors here, ample lighter pink tiny bubbled head, 3/5". Amazing tart raspberries in the aroma, even a year or more in the bottle, still pumps plenty of fruit goodness, one of the few aromas worthy of the cliche and overused "jammy" descriptor.

Taste is like that soft touch of Temptation, but with layers of raspberries all over it. Get nice notes of oak, chardonnay barrel, lemon and raspberry in a easy but complex drinker. Probably the best wild ale RR makes. I've noticed the color changes on these as they age, less pink. Good stuff, but this beer doesn't age as well as the lambic-framboise beers I've had.

Beautiful looking with nice color and lacing. Smell is outstanding with tons of raspberries. The taste doesn't quite live up to the hype the smell is bringing but it's still a very nicely crafted framboise.

375ml bottle poured into a teku.

Overall - Worth the tick.

A: 4.75 Really pretty reddish-pink with a light pink head.

S: 4.75 Tons of bright, fresh raspberries with mild funk and a bit of a jammy quality on the finish. Reminds me a lot of ddc framboise.

T: 4.25 Flavors are similar, but a bit off compared to re incredible nose. There's a nice balance between sweetness and tartness and the raspberry is there in full force, but there's a bit of a harsh, earthy quality that doesn't quite fit in. The finish is dry and mildly bitter that would be better if the previous flavors were a bit more balanced.

O: 4.5 RRBC delivers another excellent fruited sour. While there are some imperfections, I'm really being critical - this is a great beer that delivers tart, funky flavors and a great fruit character.

The superb RR blend of sweet and sour. A lot of sweet fruit in this but the bacteria is right there with it. Cherries, raspberry, barnyard, lemon peel..

Beautiful pour, pink like roses, vibrant effervescence. Nose offers a sort of saturated sour yeast note, with light fruit tones as well. Palate is tart, bubbly carb, very light funk, and light but present raspberry notes. It's pleasant. That can be a pejorative in some cases, but here it's meant at face value -- just a nice, fairly drinkable framboise.

Had on tap at Monk's Cafe the day after an event. Thank God it was still on tap! This was a huge bucket list beer for me. Pours a beautiful red/pink with a nice head that retains pretty well. Smell is fresh raspberries with some mustiness behind it. Taste is just incredible, the raspberries show up first with the funk from the brett and lacto in the middle, finishing with a crisp raspberry taste. Overall, I can't recommend this more. An amazing sour with a bigger fruit flavor than the other RR sours I've had.

Loved this beer so much on tap I grabbed 4 bottles to go!!! It's several of Russian River's sours blended together and then BA with raspberries. Nice raspberry sour flavor with a wine barrel like finish

A- Pours a ruby red color with a 1/4 inch fizzy white head that doesn't retain long before fading to nearly no surface foam. No lacing.

S- Bright raspberry aroma with a bit of lactic acid accompanying. Funk is faint but there.

M- As said before, quite dry with a high level of pucker. Medium carbonation and a lightish body.

O- A good sour but I was hoping for more funk and complexity. This is just a sour bomb where the only thing keeping it in check is the sweetness from the raspberries.

A — Pours a really bright and rich looking red into the glass, some bright red hues around the edges, overall it is clear with the slightest bit of haze. Puffy white head disappears quickly, little to no lacing.

T — Tastes much like the nose, lots of big and sour cherries and lots of raspberry representation, bit of a lacto sourness and sharpness.

O — Great overall, perhaps not quite as complex as some of their other offerings but still great.

Pink fizzy pour, funky oak and berry all the way, tart and funky with a dry finish. Really enjoyed this one, not intense on the berry side but just enough

11 - color falls in the middle ruby orange. nose is sour rasberry. jammy. super yum and fairly full bodied. the hands down favorite of the bunch.

13 - yellow and the lightest of the bunch. nose is fruity but not as jammy as the 11, tart but earthy.

14 - pink and nose is really fruity. taste is a bit medicinal but the fruitiest of the bunch.

all in all great beers across the board. all very different and all good in their own way, but 11 is above them all.

Framboise for a Cure (2014) - Russian River Brewing Company - Santa Rosa, California - American Wild Ale - 6.70% ABV - This delicious wild ale poured a ruby red color, with a small pink head that dissipates immediately. The nose featured aromas of tart raspberries and white wine up front, followed by undertones of oak, apricots, and peach. The mouth was very tart, with flavors of juicy raspberries, Chardonnay, oak, and peach that blend together nicely. The mouthfeel was light bodied, with an enamel ripping finish that was quite refreshing. This was a solid offering from Russian River, but I prefer Supplication (I'm just a sucker for that beer) and Beatification over this one. 98/100