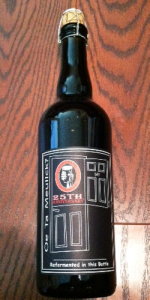 Notes: Toronado 25th Anniversary Ale started out as six individual brews, each with their own personality, and all incorporating Brettanomyces and or micro-organisms. Once the barrel aging was complete, Russian River’s Vinnie Cilurzo and Toronado’s David Keene got together to create the final blend. To create its fine carbonation, we re fermented the Toronado 25th Anniversary Ale in this bottle. Spent yeast cells from a thin layer of sediment in the bottom of the bottle. Pour slowly, allowing the natural yeast sediment to remain in the bottle.

Had on tap at the T25 anniversary party. Admittedly not the best circumstances -- it was loud, a bit crazy, and I was wearing a wig. But before I got drunk, I had the chance to sample this, think it over, and give it a score.

A: This is well-carbonated off the tap; I ordered a Cable Car Kriek at the same time and the latter arrived almost flat (lol), but T25 held its carbonation for a good 20 minutes. Hazy maroon body capped with off-white foam.

S: The baby Consecration is evident in the aroma; it contributes a dominant currant tartness and currant skin tannins. The aroma hints at clean, lactic sourness. Lemon, oak, and a touch of acetone are noted.

T: As the nose suggested, the baby Consecration component is the most dominant. There is a dark fruit presence with mild roast that suggested that a stout went into this; I later found out it was a baltic porter. Lemon juice, oak, and currant skins bring the beer out to a dry close. Unfortunately, it's a bit simple in flavor, which becomes more evident next to beers like Cable Car and especially against true blended gueuze later on (when someone opened an Armand 4' Lente). There are no flaws, but there are no standouts, either; it's a satisfactory wild ale.

M: Good mouthfeel; the carbonation works with the dry body and tart, puckering flavor to create a very drinkable beer. The acetone touch in the finish is off-putting, but I imagine that will vanish with time.

O: I'm a big Russian River fan, but I've felt that their sours (especially Consecration) have started to go downhill, and I'm disappointed to say that the trend holds here. This probably would have been better back when there were fewer wild ales to choose from, but RR's own lineup bests this one. It's also not very impressive considering the bottle price point ($30).

So for Christmas today, one of my gifts was like a 12 pack of my favorite bottles that my Moms cut into drinking glasses for me, and this beer was one of them. When we drank it at March Madness a year or two ago, it reminded me a lot of Supplication, and to this day, I think whatever the blend was, its highest percentage of any beer was Supplication. And a great beer to pick, so its easy to see why this was good. And of course, there is nothing about Supplication listed in the 6 beer blend that went into this, so what do I know?

Pours a ruddy light brown and dark red color (like Supplication). Small off white head on it. Aroma like supplication, had that earthy dark cherry sour thing going for it.

Taste brought out more of the dark fruit beyond cherry, plum, raisin and currant got all up in there too, but it never presented much of anything approaching a bitter or acidic aspect of dark fruit. That little 4% baltic porter thing might have worked well here. Normally something with this much dark fruit contingent and especially the baltic porter and currant thing would make me bArF (cool dude, handsome too) but it works splendidly here. Ashame I will never have this again in all likelihood. Like an awesome Supplication variant.

Bottle at share. Medium to dark amber, small ring of head. Aroma is fruity, grapes, some fo the tartness comes through in the nose. Taste too has mellowed nicely, smooth and pleasurable. Really nice.

Thanks Sonny! Been wanting to try this for ages.

A- Cloudy deep amber body from the hype 750ml to my snifter. A foamy off white head ascends to a half finger before slowly dying to a small ring. Spotty lacing.

S- DAMN. An experience at this point with a smattering of fruits and acids. Dark rich fruits like cherry and currants open up with plenty of sour flora and lactic bacteria depth.

The base sour and the currants are just phenomenal together. The Russian River bugs are once again legendary and really provide a good sourness and complexity.

A: Dark fruits, cherries and light currants with a moderate sourness that has a light vinous presence.

A: copper color with some deeper highlights, clear, with with a moderate white head that leaves light lacing.

T: Dark fruits, cherries and light currants, coupled with a complex moderately sharp and lingering sourness that has a bit of vinous character, and a dry finish.

M: Medium bodied with moderate carbonation. The beer has a moderately light, but pleasing acidity.

O: Delicious; when this beer was fresh the currants really popped, but with time the fruit aroma and flavor has mellowed and the funky vinous flavors have become a bit more prominent. Surprisingly, there's still a lot of carbonation.

Poured out as an orange color with a thin white head on top. The smell of the beer is pretty potent, very sour aroma on the nose. The taste is pretty strong with acidic funkiness too. Subtle sweetness but not much else. The feel of the beer is thin to medium bodied. Overall this was pretty awesome.

Color is deceiving for a wild ale. Body and nose are outstanding. I could totally dome this bottle to my wig piece. Brilliant beer.