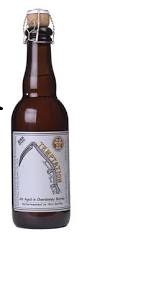 Notes: A blonde ale fermented with a special strain of yeast, then aged in French oak chardonnay barrels. Flavors of wine and oak absorb into the brew throughout twelve months of aging. During this aging process, a secondary fermentation occurs using a yeast strain disliked by most brewers and winemakers called Brettanomyces.
View: Beers | Place Reviews
Reviews: 1,054 | Ratings: 3,842 | Log in to view all ratings and sort
Reviews by Troyone:

Was suprised to have found this at Whole Foods right next to a bottle of Damnation and an Eisbock (Aventinus), Prior 8 (St. Bernardus), and "Pete's" Tribute (B. R.) was not far away on the same shelf.

Pours a hazy apple juice color with a blond hue, an off white frothy head, some lacing, and evident carb action.

An excellent balanced beer some what like a Lambic, chewy, smooth, and has a long lasting crisp grapefruit aftertaste. Note: the bottle states 7.25% abv. and was empty before I could finish the review.

"The only way to handle temptation successfully is to yield to it."

Batch 001. Temptation is precisely midway between lemon peel and ripe apricot. The highest compliment that I can pay the gorgeous, alabaster colored crown is to say that it would look at home on the finest Belgian ale. It becomes even more attractive as it slowly descends, leaving the glass positively coated with delicate lace.

Unlike some Brettanomyces-infused beer, the nose is full of barnyard funkiness without being completely dominated by it. It's easy to appreciate ripe golden fruit and the Chardonnay oakiness that was imparted by 12 month's contact with the barrels. 'Sublime' is the one word that keeps coming to mind whenever I put my nose over the glass.

How does Russian River manage to brew such amazing beer, again and again and again? The fact that Vinnie Cilurzo is the mastermind behind what I consider the best beer the world has ever seen (Pliny The Younger), yet is still able to create a stunningly complex Belgian-style ale like Temptation boggles the mind.

Even without the Brett, this would be an outstanding example of a golden ale. The fact that it's even possible to determine that is further evidence that the wild yeast doesn't steamroll everything in its path, but complements the beer in the best way possible.

The flavor profile consists of barely ripe apples, pears and peaches (complete with their natural sugars), a potpourri of spices (clove and white pepper especially), a surprising amount of sweetgrassy hoppiness and a perfect Brettanomyces puckery tang that wraps things up in a perfect ribbon of drinkability. Why oh why didn't they put this stuff in 750s?

Despite the label's advice to 'allow the natural yeast sediment to remain in the bottle', I'll do no such thing. The final pour clouds things up nicely and puts the already fandamntastic flavor into orbit. I can say without hesitation that Temptation is the best wild ale that has ever entered my glass.

The mouthfeel, while not up to the standards of Belgium's best, isn't far behind. Perfection would be easily achieved with a fraction more expansiveness. It's hard to argue with beer that is this lightly silky and this zestily carbonated.

I don't like to repeat myself, but it's a damn shame that this delicious ale isn't released in bigger bottles (I'm thinking jeroboams at least). It's also too bad that Russian River will no longer ship to us poor souls outside of Northern California who aren't able to otherwise experience the transcendence of their beer. I'm glad that I decided to yield to Temptation today.

Appearance: Pours a cloudy golden color with a huge head; the retention was very good and the beer left clumps of lace along the sides of the chalice

Smell: Except for the sour Brett tones, you would swear you were smelling an oaky chardonnay, with vanilla and white wine grapes influencing the tart green apple, apricot and sour cherry tones

Taste: Opens with a mouthful of fruit (pear and apricot) that moves in a tart, green apple direction by mid-palate; after the swallow, the tartness mellows and the more subtle fruit character (pear, melon, apricot) and oaky/vanilla elements represent themselves; unlike some of the other Wild Ales where the sour elements dominate, this one is much more subtle and complex

Mouthfeel: Light to medium body and quite creamy; medium to high carbonation

Drinkability: Another stunning achievement from Russian River; more subtle than some of the others and, in many ways, better, as a result

From RRBC's reserve, batch 4, bottled in 2009, served to us in Bordeaux-style glassware at the brewpub. An unforgettable drinking experience. Champagne-like mouthfeel, with flavours of lemon curd, brioche, yogurt and green apple butter. Refreshing acidity that lingers for minutes. Complex, but so damn elegant. Perfect. If only I could bring a case of this back to Canada...

Mouthfeel is fresh and thin but this brew is sufficiently flavorful and tart as to make the thinner, cleaner mouthfeel desireable. Creaminess and a heavier or thicker mouth would be a fault in this beer.

Tart, citric and green apple flavors highlighted by the fresh, clean mouth. Layers of flavors of citrus, apples, pears and lime. Balanced, layered, complex, elegant and sophisticated. Nose grows more wine like of chardonnay; somewhat "white burgundian" in character, as do the flavors grow in chardonnay and white burgundy flavors as you drink it, especially in the back palate and finish.

Bret and lacto very noticeable and the characteristics are nice. Lacto comes out in the mid to back palate and finish as you drink it. ("Sour milk" character in a good, not a bad way). Very drinkable, pleasant.

Oak barrels finally come out in the nose and mouth after several minutes in the glass. Really nice and worth the wait. Complex!

O: The mouth-feel, the funkiness, and the complexity is superb; Temptation is an extremely well executed product

Thanks very much to jedwards for sharing. 375ml bottle (batch #3). Served in my Allagash tulip. Poured a golden-orange with a quarter inch, bright white head that quickly dissipates into a fizzy skim that coalesces around the edges. Clarity is hazy/milky. Some lacing, but no legs. Nose is citrusy and buttery. Taste consistent with nose, some tartness, some green apple and some residual sweetness. Mouthfeel is light-medium, with a consistent background effervescence that falls just short of prickly. Great beer and, based on my limited exposure, what I would consider a classic example of the style. A truly excellent beer.

12oz cork and caged thanks to arbitrator! Batch 05x2F

S- Smells more like a saison than a sour. Very sweet fruity like yeast with some nice pale malts. A lot of banana with that nice stinging finish of grapes from the chardonnay.

T- Tart and sour for sure. Nothing like the taste, very pale in body and flavor malt wise but has a decent subtle fruitiness from the yeast that is complimented nicely by the grapes.