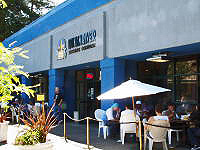 Many months of wishing to get here, and at long last, after a 6½ hour drive north from Long Beach, with a few beery stops on the way, I finally made it. Once I got booked into the nearby Best Western, after a short 1 mile walk into downtown I soon found myself on 4th Street in no time. I didnt know exactly where the place was but I knew roughly, and thanks to the distinctive blue & gray color scheme it was easily spotted from a distance.

A small overhead projection at the front provides a covered area for some outside tables & chairs, though on a wet weekend in December it was only playing host to a hard core band of smokers when I arrived. Once inside the atmosphere is of an opened out brick warehouse, but an ex-Bank allegedly. Has a Utilitarian atmosphere with its own character that is definitely not from any chain, RRBC has its own unique feel. The bare exposed brick walls are painted with light pastel colors, empty Hessian sacks hang everywhere and are printed with the names of a variety of hops. Lots of colorful old tin signs from defunct long gone breweries also help break up the open airy feel. I couldnt help but notice some old beer cans and one of those moving picture adverts from Hamms Brewery high up above the bar. The Bar itself runs down the left hand side of the pub area, taps are on the back wall. The Brewery itself can be seen as you walk past outside & to your left as you enter, as can the stacked Casks all aging some of the next generation of *tion brews. Bar stools (no backs) seat a good number, a small dividing wooden wall in of the Bar front provides a defined walkway and separates the tables opposite the bar. Kitchen and Restrooms are at the back. Atmosphere would typically be a 3.5, but the staff here raise it to a warming 4.0.

As for Selection: Where else could you get such brews ranging from an American Blonde, through a Brown, Stout, Pale Ale and a brace of top drawer IPAs, all complimented with some wonderful Belgian style & barrel-aged brews like Redemption, Perdition, Damnation, Benediction, and the simply awesome Deification. The Coming Next list is sheer torture if you are only here for a day or so. Would be great to have a Beer Engine for a Cask brew though. However, Food range is so-so; Salads, Pizza and a smattering of simple Italian fare, above average good pub food but the range/quality could be better I think (my only beef about RRBC by the way).

Top Marks for Quality & Service! Our main server over the few days that I frequented here was Matt, just a really nice guy, consummate gentleman and a solid performer behind the bar. I can best sum up the service with just how quickly and efficiently my Growlers were filled on my last day, perfectly filled to the brim, washed and cleaned off and each marked for the different brews inside, & put away for chilling whilst I drank at the Bar, all without asking. Russian River is not just about the beer it is equally as much about the people on both sides of the bar, but the people that work here are just as much a reflection of the high quality of Russian River as the beers themselves are.

I spent nearly all of my time here with fellow BA Rapapoda, but we got to meet BA Watermelonman and his girlfriend Stacy for a few brews too on the New Years (Sun)Day. One of the highlights was getting to play Washers with Vinnie and crew back in the Brewery/Warehouse area that day, serious stuff that Washers, notice I didnt call it a game!!

Overall: What to say about Russian River that has not already been said? Well the damp wet weather was utterly crap over the 05NYE weekend, but that did not dampen my love of the place one iota. The visit to NoCals beery Mecca in Santa Rosa was a 6½ hrs motorized crusade there and 10½ hrs back, but well worth it. I intend to make sure that I get back here at least twice a year, if not more, from hereon.

No pretensions here at all, Vinnie and Natalie are the nicest hosts, mingling and chatting with everyone and anyone. The staff is of the highest caliber, and so are the beers. What a place to spend (a Happy) New Years! Cant wait to get back!!

Arrived on a Wednesday afternoon in January. Pleased that there was no line to enter, and the 4 of us got a table right away. The place was close to full upon arrival, and was certainly full when we left after about an hour. Unfortunately due to other obligations we couldn't stay long. I had two of their classic beers - Pliny the Elder DIPA and Shadow of A Doubt Imperial Porter. Both were excellent, but I think I enjoyed the imperial porter a bit more, probably because it wasn't something you get too often. Loved al the old beer signs hanging around the place, and picked up some merch on the way out. I'm hoping this isn't my only trip to RR, but if it is I had a great time there!

Windsor Brewery...new new new and huge huge huge. Wow! What a large setup that caught me off guard. Full disclosure- I've never been to the Santa Rosa pub.

Sparkling new brewery with enough space to brew multiple batches of whatever they like. I had the kids in tow so the space worked out very well - large, distinct spaces for the pub, gift shop (with bottles to go), tasting room that was closed during our visit, self-guided tour (basically you can look down into the brewing and packaging areas) and a large outdoor area to let the kids stretch their legs. I can see this being gangbusters over the summer.

Such joy knowing that you can take home bottles upon bottles of Pliny, Happy Hops, Pig, select -"ations" . Wonderful and easy. Food was solid and reasonably priced. Pliny was snappy and crisp from draft. Beautiful.

Nothing quaint about it - it's a destination that you can spend several hours enjoying, and that's just what we did.

bring blank growlers, they will not fill ones from other breweries

Finally made it from the East Coast to Santa Rosa to try Pliny the Elder and some of their other brews. Definitely worth a visit and a wait for a table. The pizza is really good too and with a crowd of happy beer enthusiasts of all ages its all good.