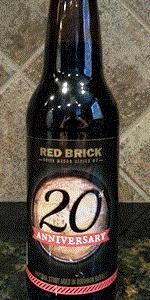 (Appearance) Pours a medium brown frothy foam head over a very dark brown body. Retention is above average and lacing is light and patchy. 4

(Taste) Soft earthy roast malt up front, quickly transitioning to a richer chocolate midsection and finish, complete with subtle toasted barrel, faint bourbon and some fragile vanilla bean. Even with warming, the flavor density is only about halfway to expectations for an Imperial Stout. Sweetness is reserved throughout and the finish is notably dry. 3.75

(Mouthfeel) Texture is slick, moderately residual, lightly chewy, very dry. Carbonation is moderate, generating a mild frothiness and a moderately crisp finish. Body is shy of medium for the style, short of heavy overall. Balance is slightly earthy roasty bitter over sweet. Alcohol presence is modest and there are no off characters. 3.75

(Overall) An impressive Anniversary ale by Red Brick's standards and an enjoyable one by mine. Not quite exceptional as far as Imperial Stouts go, with a slightly less-than-robust and simple malt body, limited bourbon flavor and range and a sharply dry delivery. Despite these setbacks, this is a drinkable and enjoyable Imperial Stout, on the lighter-bodied end of the Imperial Stout spectrum, but a decent choice for local Imperial Stouts and one of the best releases I've yet experienced out of Red Brick. 3.75

Taste: Fudge and caramel, up front, with roasted nut and vanilla tones developing; some fruitiness arrives in the middle and there is more brown sugar sweetness in the finish; slight hints of Bourbon throughout

Mouthfeel: Medium to full body with low to moderate carbonation

Overall: This beer has aged nicely and is a very well-balanced barrel-aged stout; it is a bit too sweet for my palate but it has a beguiling range of flavors

Reviewed by Brackh from Georgia

Reviewed by dogfishandi from New York

Pours completely opaque black. A small mocha colored head that quickly recedes to a thin ring. Light lacing and legs on the glass.

Nice bourbon aroma, just slightly boozey when compared to most of this style. Some creamy oatmeal at play with perhaps a touch of smoke.

Not huge on bourbon flavor but it's there, more in the finish. More as it warms. Oaky vanilla, smooth oatmeal with traces of charred wood and smoke. Quite nice. Very slight hints of oxidation at times. Some chocolate as well.

A pretty nice barrel aged stout, there are much better examples out there but considering the price and availability I'd drink this again.

T: Roasted malts, vanilla and cacao in balance, tannins from the oak, some muted bourbon, and mild dark fruits - almost more candied fruit peel. Sweet maltiness with mild roast bitterness and a bit of bourbon burn in the hang.

M: Silky smooth mouthfeel but the body is on the light side. Low alcohol heat, especially for style, and moderate alcohol presence.

O: This was a good beer, but not mind-blowing. It didn't have the chewy, thick mouthfeel I'd expect, and there isn't a whole lot of bourbon flavor or heat. Certainly not a beer for someone who prefers a heavy-handed approach to barrel-aging. I had heard enough good things I had high expectations, and it didn't live up to those. I'm still happy to have tried it, but this falls quite short of the best barrel-aged stouts.