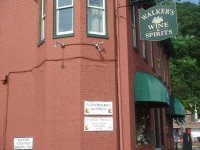 I found the listing for this place here on BA and decided to check it out, as it is at the beginning of the main shopping street in Lambertville, right off Route 29.

The place is pretty spacious, but it doesn't have a lot of booze. I've seen much smaller stores packed with much more wine and liquor. The beer selection is small but damn good. There is one big cooler with macros and some craft six-packs and a room-temp with bombers, Belgian and European imports and more six-packs.

I bought a Flying Fish Exit 13 and a Black Albert "royal stout". Both pricey at $9 and $10 respectively, but these are rare beers I can't get in New York City.

Prices are, in general, a bit on the higher side, but then again, Lambertville/New Hope/Bucks County is not the cheapest area... service was average. Guy was there, said hi, didn't offer help, rang my purchase up, that's it.

Come check it out when you're in the area. It's well worth. I give it a "4.5" in selection because, for a small town like this and despite the store's focus on wine, the beer choices are really excellent.

I stopped in to hunt down some dead guy whiskey and ended up leaving with a few of rogues spirits some black ops and a few other bombers. They have a fantastic whiskey selection to go with their craft beers (I ended up spending a large chunk on a bottle of Jameson rarest vintage reserve). The staff is very laid back, friendly, and extremely helpful. Its a smaller shop but the atmosphere is good, the prices are fare and the staff is great. Not a huge wine fan but it did appear that their wine selection was on point as well.

Located a few blocks from the more concentrated hustle and bustle of downtown Lambertville, Walker's is seemingly tucked into the first floor of an older Federal style building, perhaps once a residence, on Bridge Street and Route 29. It's also a short walk from the bridge across the river to New Hope. While short of parking and a bit perilous to exit traffic-wise, it's not a challenge most New Jersey natives would find especially daunting.
It is small inside, and dedicated mostly to wine, no surprise in restaurant-rich Lambertville, but it's well-laid out and cozy, rather than insufferably crowded.
The beer is fresh from the dates I could see, speaking of a concern for quality, something a smaller establishment such as this one needs to be cognizant of.

The service is exceptionally down-home and friendly, and they know not only about the beers from their neighbors, River Horse, but they speak intelligently to the others as well. And there's nothing like a parting, "Come back and see us again soon" to ensure I'll do exactly that, as soon as I can.

Located in four coolers, the selection isn't especially broad, but it is worthy of a stop if you're in the neighborhood. Not surprisingly, ultra-local River Horse is offered in every variety, and there's plenty of DFH, Troeg's, Victory, and even some Sly Fox now. The bigger crafts such as Sierra Nevada get a nod, as do the various standard imports, and the usual, expected Belgians. Of course, the macros win a lion's share of space, but hey, the little guys have to survive too, right?

The prices might be a tick above what I generally pay farther south, but it's certainly nothing to get hung about. It's what I'd expect in a fashionable place such as Lambertville.

I love patronizing the smaller business, no matter what I'm buying, and it's even easier to do, and worth any extra pennies spent, when the people who run it are as friendly and pleasant as those here. It might not be the place to stop for that hard to find gem, but it's a perfect place to stop for something good to drink, no matter your tastes. Stop in soon- my guess is, no matter what you buy, or don't, you'll leave with a smile.

Walker's is a small but cute, little store in Lambertville, NJ, which is just across the bridge from New Hope, PA. Some of New Hope's trendy character has spread to Lambertville, and interesting boutiques, shops, bars and restaurants can be found readily within a few blocks of the bridge. Although they mainly concentrate on wines, Walker's does offer a good selection of single malts, bourbons, specialty rums, tequilas and beer. All of their beer is kept cold and sold in either 6 packs or larger single bottles (750 ml, 22 oz.). The stock is rotated well, and kept fresh. They have a decent variety with roughly 12 feet of cooler space, and they stock most of the River Horse beers (although the brewery itself is just a few blocks away and you can buy beer there during shop hours). The service is good, and it's a pleasant stop during a day of window shopping even if you're not looking for anything special.