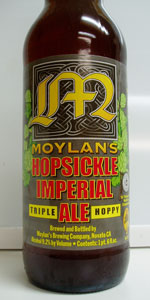 Notes: In celebration of the hop... this is a hop tribute, worthy of a King's Imperial court. Enjoy the blast of fresh Amarillo, Palisades, and CTZ hops as they stimulate the taste buds in a truly imperial fashion. Puckerup!
Malt: North American 2-row malt, Belgian Caramel Pils, Carafoam, Carahell, acidulated malt.
View: Beers | Place Reviews
Reviews: 949 | Ratings: 1,677 | Log in to view all ratings and sort

A: Pours a copper color with 2 fingers of head that fades down to a thin cap

S: Very hoppy. Citrus and pine up front along with some light floral notes

T: Follows the nose. Pine resin and citrus up front along with some lighter floral notes. Light malt backing. Quite bitter. Finishes with lingering pine and citrus

Golden honey color with a 3F head in a Spielgelau IPA glass.

Too rich, malty, full-bodied and boozy. Triple IPAs aren't fun because they lose all of the fresh nuanced hop notes. This beer just tastes like a jumbled malt bomb. And at $19 a 4-pack, I regret revisiting it.

I've been brewing & enjoying IPAs and double IPAs for 12+ years now, and I'm amazed by all of the positive reviews for this beer. Usually a beer with 90 or above on this website is a stellar example of the style. The only reason it has received higher than average marks is due to the high booze content. Some people are just suckers for a quick buzz.

Stone Enjoy By IPA is better than this beer and similar abv.

Aroma is bursting with floral notes, candied tangerine, and orange zest upfront, with subtle accents of fresh peach and orange blossom honey guiding into sticky apricot and grapefruit with a touch of malt to close.

Taste offers earthy pine and sticky apricot against refined, resin-soaked malt dominant across the profile; booze-laced grapefruit peel comes into prominence on the back end, while a dirt-laced fresh hop char marks the swallow.

Mouthfeel shows a slightly oily full body and carbonation a shade below medium; a slick, semi-boozy mid-palate warms into a rounded, honey-smooth and lightly sticky finish, leaving a gritty, bitter lingering remaining long past the swallow.

Not one for all occasions, this is an old-school IPA intense in every regard; saturated and just barely self-contained, but I can't help but respect the finesse they managed into such an effectively hoppy brew, potent even as it warms.

I picked up a bomber of Hopsickle from Hi Times in Newport Beach, CA on 02/12/2017. No bottled date, which is pretty asinine in this enlightened age of "drink fresh." APV 9.2%. Colorful label touting the various awards won by this imperial IPA and providing you with directions to Moylan's Brewing in Novato, CA. Novato is located 30 miles north of San Francisco in Marin County.

Actually, I'd classify this beer as an Imperial Triple IPA -- it has an insane hop-forwardness with an Imperial IPA's backbone. This beer relies upon Amarillo, Palisade, Simcoe and CTZ hops -- a ton of these hops.

Hopsickle pours a light hazy copper with low to moderate carbonation. 1 finger of ecru foam which dissipates quickly. Beautiful lacing. The smell is strong notes of honey and hops -- citrus, flowery and piney hops. This aroma, while relatively okay, doesn't prepare you for the assault on your taste buds.

The taste starts with honey and bitter pine hops, followed by hops, hops and more bitter hops, ending in a delightfully (or painfully, depending on your opinion) bitter honey taste. At first sip, the honey (malt) backbone washes out the complexity of the hops. But then the bitter hops quickly overwhelm the honey taste, leaving just a wonderfully bitter, piney taste that lingers in your mouth for literally hours afterward. I'm not kidding -- for hours afterward. This is some very cool sh*t!

This is definitely an imperial IPA of extraordinary hop intensity and bitterness. That said, Hopsickle isn't for everyone. I doubt many drinkers will truly appreciate the bitter/sweet insanity of this imperial IPA. It literally knocks your socks off with its hop bitterness and honey malt. This isn't just something one drinks every day -- this is also what one savors on special occasions.

Poured from a bomber into a tulip

O: A big hoppy Imperial IPA. Not the best I've had but definitely upper third. Well worth snagging for a test drive.

Darker than average ipa, this one brings a healthy dose of crystal malt if you're into that kind of recipe from yesteryear. So much hop oil it makes it almost impossible to form the off white head on top.. Aroma dropped lots of caramel sweetness and C hop bitterness.

Taste is just going for those ibu numbers, trying to make it as bitter as possible while creating an almost barleywine like malt body and sweetness to boot. Its hot and bitter.

Only comes in a bomber, way expensive for its one trick pony bitterness. Thanks for the trip down memory lane, but ultimately this is a barleywine to me.

Poured from 22 oz bomber into snifter. No visible bottle date.

M: Medium body with average carbonation. Finish is bitter with hop oils lingering on the tongue.

O: Seriously huge hop bomb that I thoroughly enjoyed. My first from Moylan, and hopefully not my last!

They did a very good job with the hoppiness. Great beer. The hops are very strong and the aroma is overwhelming. The taste is also very hoppy and smooth.

Pours a hazy reddish orange. Smells resiny, piney, orange and maybe grapefruity. The taste is a wonderfully bitter, yet balanced brew. The mouthfeel on this big beer is really selling it for me. The body and carb level are making a happy dance on my tongue! Really wish I had brought back more from my vacation, yum!

ABSOLUTE HOP BOMB!!!!! Couldn't even comprehend some of the citrus notes before the bitterness destroyed my palate. Extremely piney. This is not a '100' rated beer, bros. But it is damn good. Oddly enough, some sweetness shined through (maybe residual resin, maybe (chocolate?)?

Smell: lots of complex hops. Floral and resinous. Not much citrus if that's your thing.

Taste: unique and complex from the start. Not very sweet. There are surprising notes of chocolate and coffee. Finish is bitter as the tomahawk hops come through

Feel: medium bodied. Not crisp but not overwhelmingly sticky.

Overall: a very distinct imperial IPA. Strong hops and not afraid to let the bitterness fly. Fans of sweeter IPAs might not be a fan but overall a very enjoyable drinking experience.

TRiGS from Canada (BC)

Must have got a relatively fresh bottle as I didn't notice any lack of carbonation or muted flavours like some of the other reviewers. Great beer. Bready, malty, with a pleasant bitterness. Excellent mouthfeel. Bitterness balanced quite nicely with malt flavours.

Don't know exactly when this was bottled (come on people, date stamp that shit...seriously), but shouldn't be more than a couple months old.

The taste and smell on this are great. It's much more malty/bready than I would've expected, but this is well balanced by a hop kick in the middle and a lingering bitterness.

I would've rated it higher, but, considering the price I paid, I expected something better executed. My bottle is way undercarbed and so the mouthfeel is lacking. Fix that issue and it'd top-notch.

Looks super hazy, nice off white head that disappears quickly. Smells like one of my favorite hops being simcoe, super citrusy, piney, malty goodness. Tastes nothing like the smell, a very malt forward beer with subtle notes of the nose, earthy, mineral iron towards the end. This is not what I was expecting from something brewed in California. This is a malt bomb at times. Medium to heavy side. Just not at all what I was expecting from these folks. I liked it, just not a flavor you'd expect from simcoe and amarillo.

This may have been an old bottle, hard to tell with no bottle dating.
Will re-review when I have this again; this just wasn't what it should have been when I had it.

Smells of pine, earthy, woody, a little lemon. Strong malt and pine resin/spice flavor, rye. A little over powering on the hop resin which dominates the palate and aftertaste. Heavy body.

Way too bitter for my liking. In fairness, there was some age on this one, so I should revisit it when fresh. Unfortunately those were all the notes I had on this one.

A - Pours a hazy orange with a one-finger white head. Lots of sticky lacing.

T - There is a citrus peel and piney hops right upfront. Once the citrus fades the bitterness kicks in. The bitterness is aggressive and lasts through the finish.

O - This is one big bad DIPA. Lots of piney hops and aggressive bitterness.

A: Lacing and copper colored.

T: Bitter as hell. Along with pine, that is the taste. I don't usually get this even with some of the other big IPAs out there.

O: Unbalanced but hoppy and bitter as hell.