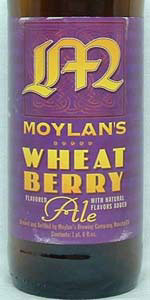 Moylans Wheat Berry Flavored Ale, a purple label with yellow/orange lettering set amidst the 22 fl .oz brown glass bottle looks quite striking. Well it certainly empowered me to remove and adopt it from the Cooler from whence it sat dejected. Whos Ya Daddy?

The massive white rocky head that forms could protect this beer from a Nuclear Strike. It is voluminous, but yet has an incredibly low density as it is comprised of huge fractious bubbles that lace well when they explode, and pop, as the head settles. The beer is transparent, very clear and incredibly golden.

The nose is incredibly fruity, deep fresh raspberry and loganberry traits with some apple and pear hints. Mmmmm. Nice. Apparently, this is flavored with boysenberry?? Duh, What? I am not sure these grow in England, or even what the hell these are??? Stand in the corner with the Dunce Cap Bum  Mr. Uneducated USA Fruit Recognizer strikes again. Anyways, I suspect they may be very similar to what we Limeys refer to as Blackberries in England.

Either way, the nose is lusciously fruity, and it reminds me of Blackberry, Raspberry and Cloudberry Jam that our neighbor in England used to make years ago. The Raspberry traits, in particular, roll up the nostrils and even remind me of the times I went berry picking amidst the thick bramble hedges in the fields of Englands green a pleasant land when I was a child, covered in scratches and bloody scars of course.

Served slightly chilled, the beer has a amazingly refreshing initial taste. Again, I get Raspberries in the introduction. Are Boysenberries related to Raspberries I wonder?? The fruity introduction is mildly sweet, never cloying, but still very clean and refreshing. Not sure where the Wheat enters here, I have no idea. For me the character of Wheat beers is easily drowned when fruit is involved, and besides this is not cloudy, but clear. The emphasis is on fruit in this beer, and it works well for me. But there again I like Raspberries.

It is not often I enjoy a non-lambic fruit beer, but I will be honest, and say that I rather enjoyed this 5.0% ABV offering.

I am still intrigued, as to just what the hell a Boyenberry is though  LOL.

Pours a very pale yellow colour with little to no head. Aroma of sweet, sugary boysenberries and cotton candy. Taste was very sweet, full of berries and a little bit of tartness. You don't really taste the wheat here. This beer is more of a novelty than anything I think. Not a great fruit beer, but interesting nonetheless.