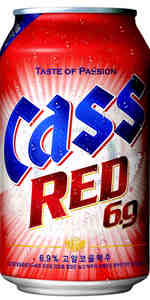 355ml pull-tab can from a Circle K in Saigon. Nonsense marketing jargon on the can is hilarious: "Sound of vitality," "savory taste of high alcohol beer made from the finest aroma hop." If there's anything I want in a beer, it's for it to sound vital...

Aroma of corn and booze, plus some syrupy cheap malt extract. Mild intensity.

Overall, it's disgusting fare and I find myself craving a sip of SABMiller's Zorok Lager to get the taste of this out of my mouth. As fake as a K-pop music video and far worse than Cass Fresh. This is a definite Pass.

I would say this is your basic BMC corn lager, but I actually get a touch of sake or rice here.

I suppose if you have nothing else to drink this could be a last resort, but there are many fine spirits available for substitution anywhere you might find yourself in Korea. Not to mention, you're probably more likely to be downing some social soju instead.

As I sift through the shallow yet incredibly murky waters of my Korean beer history, I stumble across only a few high ABV beers. High ABV beers can be a blessing and a curse; at home, a ABV micro or Belgian often indicates the process and ingredients used to yield more alcohol production. In Korea, a high ABV means the people at Cass thought we need not waste our time drinking two Cass Fresh's, when we could just crush one Cass Red. That's how I felt when I purchased this at a Family Mart, and that's what I understood after imbibing this little treat. It's a Cass with more booze...that's what it is...

Appearance: Though it was served in a can, when pouring some out on the sidewalk for my dead homies, I noticed a pale yellow color. The color is much akin to standard Cass and all Korean macros for that matter. It is not in any way red...the redness denotes the color of the can. That's a standard Korean misjudgment, and I find it oddly charming.

Smell: Due to the increased ABV, alcohol does hit the nose, along with a bit of old beer smell. Not too much "complexity" here.

Taste: Alcohol, watered hops, some intense tinny-ness. It tastes like one of your lower-grade forty ounces of malt liquor. Yes, there are classifications of malt liquor forties, and this would be in the low end of the spectrum. Still, I had plenty in college and check me out...I'm kickass.

Mouthfeel: Like seltzer--fizzy, but with some leftover alcohol dryness. Although the dryness can be delayed through continued consumption.

Drinkability: Why not drink a few of these? If you need to play catch-up and don't feel like having 6 Hites or Cass', have 3 Cass Red's. The taste, minus the tinny-ness and obvious booziness, is nearly identical to the original. If you're in the mood to taste your beer (at least the alcohol aspect), then put one of these down your skull gullet.

Appearance: Perhaps naïvely, I thought this beer would be at least a little bit red. It's not. It's a fairly generic golden yellow, perhaps a touch darker than a typical pilsener but not quite into Märzen territory. The head is white and smooth with fine bubbles, but even in an etched glass, it vanishes in the blink of an eye.

Taste: Surprisingly tasty. Very inoffensive save a touch of sweet, medicinal alcohol. Too weak, though. This tastes almost like nothing. I wish it had more hops.

Drinkability: Better than your average malt liquor - but when all is said and done, it is still a malt liquor.

So it comes to this, I am bored sitting at Incheon airport reviewing a beer whilst waiting for a plane. Picked this one up at the stand near gate 14, and after two weeks in Asia I can go for anything a bit different. According to the can, this is the taste of passion.

A-Mildy reddish in appearence, not much head to speak of. This

S_sort of a sweet alcohol scent but really not much of anything.

T_The alcohol dominates but not in a harsh way. Rather it is rather sticky sweet up front. Follow through really isnt much different as there is a noticeable lack of bitterness.

D_This isn't too different from the 40's I used to drink in high school. Not much to it, though to be honest it isnt all that offensive as some beers of this nature can be. I guess it is at least a little different than the normal Asian lagers.