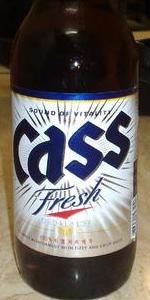 Out of a bottle at The Prince in Korea Town, Los A feels, CA.

Well, straight up, it’s pretty flat as if Van Gogh was on Zoloft. Like, there’s not a lot going on here. As if Vincent was just dull, blank faced and sad (even more so, I suppose). No wild spirit in this one. No “hurray!” Ok, I’m out.

Hey, come on, it is definitely NOT awful. Yeah, I know, it’s the same adjunct [email protected] and yeah, It’s watered down and the aftertaste is quite bad and metallic.
But it feels better than most Japanese beers that they have here in Japan. Korean lagers are always better somehow.
Abd not to mention that it goes very well with Korean food! You can’t even feel its aftertaste… :)

The secret to drinking Cass:

Step 1. Buy it in the large plastic bottle variety...multiple bottles

Step 3. In a safe location; IE; barracks room, day room, place of residence, etc.... pour beer into a solo cup, pour a shot or two of Soju in solo cup

Step 4. Drink and enjoy...responsibly....or something

Let's be real here. This beer becomes pretty good in your memory after a night in Hongdae mixing it with Soju and having to call the bars to see if they had any lost phones turned in the next morning. I remember the good times with friends from Cass, but I guess my mind purposely blocks out the taste. At the end of the day, it's a potable liquid that contains alcohol.

L: color seems fine, but the beer head which comes up after pouring in the glass looks so rough.
S: Smell of hop&grain litely comes first, like ordinary american lager. But smell that comes later is awful.
T: Taste at the front is quite fine as an american larger. Little bit sweet and tast of corn comes first. But with the smell after swallowing, only bad taste remains in the mouth.
F: Very fresh because it is highly carbonated. But the smell & taste ruins everything
Overall : I recommend to mix it with Soju. It highly reduces awful taste at the behind.

From a bottle at a restaurant in Seoul. Clear golden color with white head. Grassy smell. Light body. Tastes of cracker malts with some grassy hops. Typical Asian lager, goes well with food but not that interesting on its own.

Got a bottle at Samhae Jib in Seoul.
Went well with the fatty food at the restaurant though, but when it's by itself, just a bland mass brew with little taste.

Poured from 11.2 oz bottle into pint glass. A thin white head falls quickly with virtually no lacing. Color is clear straw with mild streaming carbonation. Aroma of strong grassy hops and yeasty bread. Mouthfeel is thin and light. Flavor is mild -- cracker with some hint of grassy hops. Overall it is decent but just very underwhelming.

There really is nothing like drinking a ice cold lager on a hot day in an Asian country.

This is how I had this lager.
Nothing at all special, but it just tastes perfect in the right environment.

Poured into a pilsner glass. Pours a light to medium golden amber with a half finger white head that dissipates to a thin film with light lacing. Aroma of lightly grainy biscuit malt, grassy hops and a hint of lemon. Flavor is attenuated biscuit malt with a little husky grain, a hint of caramel, grassy hops. Flavor tuckers out into a bland, grainy and grassy finish. Light to medium bodied with sharp carbonation. If it looks, smells and tastes like a adjunct lager duck, then that what it is. I tend to rate this style higher than the average, mostly because, although I rarely crave one of these, their strength is being mild and inoffensive to the most people, and I find them to be drinkable if unmemorable. This is not one of the better adjunct lagers, and the flavor is simultaneously a little grainy rough and quite muted. This could be partially because, despite the unfortunate "Fresh" in the name, this has probably been sitting around for a long time, both in shipping and distribution. I know I've been watching for an opportunity to buy a single bottle for quite a few months (my favorite beer store got quarts of this; I wisely waited for a 12 oz. single). Bland and a bit a rough, a satisfactory, but forgettable adjunct lager, as so many commercial beers are from Asia. A boring, but painless tick of this brewery.