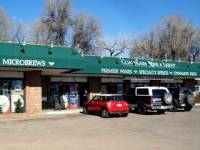 View: Place Reviews
Reviews: 33 | Ratings: 51 | Log in to view all ratings and sort
Reviews by shivtim:

Accidentally happened upon this little gem when exiting I-25 to go to a 7-Eleven. We almost witnessed a fight between an angry customer (whose check had bounced) and a 7-Eleven employee.
I saw a Dogfish head sign in the window and it said "microbrews" on the awning, so I figured I'd wonder in. Good thing I did. Great selection of singles of various sizes on the shelves and in fridges. Lots of refrigerated six packs too. Some Belgians etc, but of course I was there for local and west coast beers. I saw Pliny the Elder (sorry aforbes10), and picked up a Bristol mass transit ale, Tommyknocker Pick Axe, and a Fort Brewing Hop-15. Would have gotten more but I had a flight to catch 48 hours later, with no checked luggage.
The staff behind the counter seemed friendly enough; I didn't need or ask for help and they didn't offer it.

Also, there was literally a large coal train passing directly by the store. I suppose if there was an "atmosphere/vibe" rating for liquor stores, this place would get a 5 for authenticity.

Acknowledging your customers goes a long way. Been coming here for 20+ years. The nearby East coast colorado college has bought the place and everybody not driving a mercedes or bmw is treated like a towny. Snobs with rich kids to validate their attitudes. Fuck this place, go to queens west on Unitah or downtown spirits on Wasatch/Colorado, Greg and crew will treat you like a rockstar 24/7 .

Coaltrain rules. My in-laws live in The Springs and this is my go to for it all when in town. Great staff, awesome selection & some really cool verticals made up at fair prices!

Service: Folks were very nice, knowledgeable and steered me in the perfect direction for local offerings of certain styles.

Selection: Absolutely amazing selection of domestic and foreign beers. Something for everyone, and then some. One of the better bottle shop I’ve been to.

Nice selection of beers from the world, across the US, and Colorado. The staff was knowledgable and helpful. The prices were the same as some of the other stores I have been too in the Springs.

Was here mid-September. The beer selection is impressive but I was expecting more CO selections than I found. The beer cave had lots of bombers and seasonal picks. The build a six pack section had about 50 options, including some non-craft ones. Staff was decent. It's easy to miss getting onto the interstate with trees in the way.

Tons to pick from, Really Awesome

They were under construction so maybe not best review regarding vibe. The staff was very friendly and the selection was awesome for an out of towner from Texas. Will definitely stop by every time I'm in the area.

Stopped in here during a vacation in early October. Great selection, friendly staff, fair prices - if I lived in CO Springs this would be my go-to bottle shop.

Great little store with a huge selection. Their store is not in the easiest location to get to, but once you're there - outstanding. Their only knock is the organization of the store - rather haphazard at best, but if you have the time to search one-by-one through all their shelves and displays - they always have some gems!

Can't believe I'm about to say this but this place has too much beer. Or maybe not enough building. Either way they have an amazing selection. You could do a full Belgian tasting just from what they have on the shelf. The six packs selection is just good but the single bottle selection is staggering. They have all the mikeller, eclipse of every color and evil twin you could ever want and the most comprehensive selection of Colorado beers I've seen. Prices can be a tad high but, they have what you want!