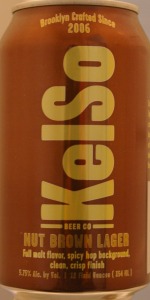 Poured to a great, off white head, with great creaminess and excellent retention and lacing. Appearance was a clear, dark copper color. Aroma was of malt and caramel with some fruit notes. Tasted very malty with strong notes of chocolate, caramel and toffee. Nice creamy mouth feel with a sweet to dry aftertaste, slight bite at the end.

Pours to a 1 inch head that recedes to a thin film and laces moderately. Clean light brown. Aroma is malty and nutty with a hint of toasted pecans and chocolate. Flavor is clean and crisp but on the sweet side with roasted nuts, brown sugar and pale malts. Low bitterness and not much in the way of distinct hops. A tasty brown ale/lager.

Interesting beer. First off it's a lager and not an ale. Secondly, it's really more of a dark copper than a nut brown in color, although I'll concede they're close. It's lightly chocolatey/cocoaish with a bit of caramel sweetness (I initially thought of a Tootsie Roll) and nuttiness, but also slightly roasty like mild black coffee. Some floral and spicy hops appear towards the finish, and it finishes mostly dry with just some residual nuttiness and cocoa. Really nicely balanced with some malt and sweetness to it, but not at all "sweet". This could be an entry-level beer for someone who hasn't really tried dark beers yet, but it's also got enough character to keep even the most jaded connoisseur happy. Nicely done!

On tap at the Brickyard Gastro pub, NYC.

Fresh keg just tapped, as the bartender wrote it on the board right before I ordered it. A nice, clear, ruby brown color with a small off-white head. Nutty, chocolatey, breads malts balanced by light herbal/earthy hops. The initial impression implies sweetness, but it finishes with a soft dryness. Medium bodied, clean and smooth, this beer is basically a Munich dunkel. And a good one, at that.

This was a CANQuest (TM) score during my most recent foray to New York and Brooklyn, making it ever easier to entice me to come up and visit! Have CANS? Will Travel! That's my motto.

From the CAN: "Brooklyn Crafted Since 2006"; "Full malt flavor, spicy hop background, clean, crisp finish"; "CANS: Infinitely recyclable Beer helps"; "Created by the husband and wife team of Kelly Taylor & Sonya Giacobbe, these 100% hand-made craft ales and lagers have been brewed fresh in the bountiful borough of Brooklyn since 2006. Mounds of malt, bales of hops and countless hours of dedication and passion. That's KelSo Beer."

A nice, loud Crack! revealed a brimful CAN, so in salute to the brewers, I utilized an inverted Glug. The pseudo-cascade was brilliant, finally settling into two fingers of dense, foamy, light-tan with limited retention, although it was already beginning to evince some great lacing. Color was more coppery than brown (SRM = ~ 22), but with NE-quality clarity. Nose had a really malty sweetness and I would have sworn that I was drinking an ale! Mouthfeel was medium-to-full and the taste was kind of chocolaty, sort of nutty and VERY reminiscent of Newcastle Brown Ale. Did I just type that? Well, I kid you not and if this is a lager, then I am deeply impressed! The hops were not what the verbiage had led me to expect as they were pretty much not discernible but the finish had the same sweet malt flavors that I usually get in an ale. This would be worth seeking out as a novelty, but if you are into Brown Ales (I am not), then you should definitely see how this stacks up against some of your faves.

Poured a dark copper hue with a one finger foamy white head. There was decent retention and lacing.

The smell featured a strong up front toasted grain. Smattering of spicy hop as well.

The mouthfeel was full, yet clean.

Had a pint at Sweet Afton for $6. I tried this once before and I feel about the same - this is a great sessionable lager. The flavor is a touch light, but there are sharp toffee notes, a smoother nutty taste and then a mild caramel background. I'd be happy to have a few pints of this lager any time. Check it out next time you're in the city.

So this is my fourth growler since whole foods on the bowery started offering this great service. only 7.99 for the growler....I got to say that it is a pretty sweet deal. Also I like Kelso...they are one of the few breweries that do mostly lagers, and I don't really have to much to complain about with this beer. It is an easy drinker, that is full bodied, and I think that it is a good cross over beer for people who might want to try something than their typical macro.

A- Pours a opaque brown color, with a minimal white/tan head...with very little lacing.
S-Nutty chocolaty malts....slightly sweet, with a bit of hop muskiness.
T/M/D- Almost a medium body with light chocolate, and nuttiness. Smooth and full bodied....does not appear to be a complex beer, but has nice subtle flavors. Hazelnut, pecan, and some walnut. A bit of planty hops, and a slight bitterness that does not overwhelm in the finish.

It's pretty nice to be able to take this one home.

A: Poured from the can into a v-shaped modified pilsner-type glass. Body is clear chestnut brown with a half-finger off-white head. Good amount of sheeting of lace. Good presentation.

S: Nice nose - toasted malt, some caramel malt and a touch of nuttiness. Hint of vanilla as well.

T: Pretty much follows the nose, with some roasted chestnuts, caramel malt sweetness and toasted bread. Vanilla noted as it warms. Touch of dark fruits as well.

M: Relatively light in heft. Carbonation is on the lighter side.

O: This is good stuff. An easy, yet flavorful, drinker that's perfect for a modestly cool Fall night. It's almost like a Brown Ale, but a little "cleaner" in flavor and thus an easier quaffer. I suspect this would pair well with spicier fare, like the turkey chili I'll be having later tonight.

I've had this a bunch of times in Brooklyn, and was surprised to see that there haven't been more reviewers for what I consider our finest brown (surprisingly, I think this well-hopped lager's got more bite than Brooklyn's Brown Ale or Six Point's Brownstoner).

Pours a coppery brown with very little head and thin droopy lace. I'll admit, it doesn't smell like much cold -- some subtle malts, some nuttyness, but once it warms up a bit, the citrusy hops come out. As I said, I think it tastes great. They must use a blend of citrus and bitter hops to give this beer its complex character. Sour fruit, roasted malts, and a hazelnut / walnut thing going on (not a surprise with the name and all...).

Medium body, but a crisp finish for the lager style (it's something they do with the hops), it's very drinkable. One of my standard choices at local bars.

on tap at Artichoke in NYC.

First sip is nicely malty, with a faint hint of fruity flavor from the yeast. Malt dominates, and the beer finishes clean with no harsh flavors. Overall a vey nice beer, I would certainly get this again.

From my notes of a Brazen Head cask festival.

Poured out a dark copper brown color, with a big uneven off white head, nice lacing. The nose offered a good malty spine surrounded by mild spice, and a hint of wood. The taste countered with some hop action, but balanced nicely by the sweet malt. Mild spicing adds good character to the beer. Crisp mouthfeel and a clean finish, this beer has sessioning written all over it.

Aroma is a bit malty, not much there, but smells fresh.

On the palate there is a very pleasant bready nuttiness but a snap that keeps it from being heavy. Very mild bitterness. Smooth and drinkable, shows excellent balance. Well made, I am hoping to try more from this local brewery.

A: The beer is clear amber in color and has a slight amount of visible carbonation. It poured with a finger high dense beige head that gradually died down but consistently left a thin layer of bubbles covering the surface.
S: There are light aromas of dark and chocolate malts in the nose.
T: The overall taste is rather malty; there is a bit of sweetness in the initial taste and this is followed by flavors of dark and chocolate malts. There are some hints of bitterness in the finish.
M: It feels medium-bodied and clean on the palate with a moderate amount of carbonation.
D: The beer goes down very easily and I wouldn't have a problem drinking this all night long. In this respect, it's very sessionable.

A dirty garnet-colored pour, with a heavy, but wavering head. The few, the proud, the... infantry is running in the other direction. The lacing laps around the glass in boring Nascar fashion. The brew is just a few degrees off my prescription.

Roasted almonds & toffee while still very cold. A healthy amount of hazelnut & alcohol comes into play as the glass sweats. Smells like an iced down Frangelico.

More hazelnut, whole grain bread, even some peanut. A mild, but lingering taste of citrusy bitterness finishes it off.

Carbonation is middle of the road, but very soft on the tongue. Quite easy & clean while chilled, though finishing off the growler got a little sticky, with the alcohol becoming more evident & separate from the other flavors. I should of kept the bottle in the insulated fried chicken bag Whole Foods gives out. Just a result of my laziness, not wanting to get up for the fridge five times. The Giants were getting killed & it was just so much fun to witness. :P Still, the beer fell apart at the very end.

One growler down before the third string quarterback got thrown to the dogs. I'd call that drinkable. :)

Found on Tap at 67Buger in Fort Green, Brooklyn. Pours a nice chocolate, copper color with about one finger worth of fluffy white head. Smells of toasty malt and subtle hops. Taste is a strong caramel malt and brown sugar up front followed by a nice solid hop flavor and bitterness. Nice toasted barley character in there too. Mouthfeel is a bit off. Its nice at first, but then thins out in the middle of the sip and then picks up again at the back of the palate. Not bad. It went great with my blue cheese and bacon burger and sweet potato fries. Very drinkable to boot with enough flavor and character to keep me interested.

It has a clear amber color with a bit of carbonation in the head.

The aroma has some nuttiness.

The flavor reminded me of a lager version of Sam Smith’s Brown Ale. It has good malt balance, a wonderful hop bitterness. It’s a wonderful beer to drink and I would argue possibly better than Brooklyn Lager.

Kelso Nut Brown Lager from Greenpoint Beerworks / Kelso of Brooklyn
Beer rating: 83 out of 100 with 155 ratings