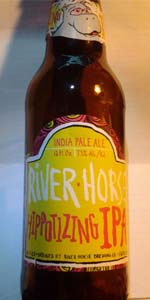 Notes: Our American IPA is a cross between the West Coast and New England styles. It’s brewed with a pale malt profile to allow the hops to shine through, then dry hopped with over two pounds per barrel worth of Mosaic. This is a great amped up IPA for hop lovers.
View: Beers
Reviews: 38 | Ratings: 121 | Log in to view all ratings and sort

A - Pours a murky and very hazy medium orange copper color with nice white head retention on top and vibrant and steady carbonation.

S - Aroma is herbally, weedy, and some pine.

T - Floral, some citrus, and finishes with some slightly spicy pine bitterness.

M - Thick and soft with very little carbonation on the tongue.

O - My fault for grabbing a six month old bottle. Will definitely revisit a fresher version of this beer and update the score accordingly.

Hazy copper, it delivers as advertised. Good balance between the sweet malt and alcohol with the hop bitterness. Very pleasant hoppy aftertaste. More potent than it tastes.

Look-Hazy light orange color leaning towards the darker side of orange. Pleasant look to mee

Smell-Got some fruit on my first nose smell with mango and a bit of pineapple. Overall a clean not overpowering bouquet

Taste-I got a slight hint of sweetness but forward hops but very smooth, Creamy back throat taste and easy down. Subsequent tastng I am getting some chocolate-malt flavors, nice overall taste.

Feel-Primarily a creamy mouthfeel to me. Very slight astringency on the back of the throat but first impression/taste was very good.

Overall-My first River Horse offering and was very pleasantly surprised and pleased. Good potent alcohol number that might limit my having more than about two but nonetheless an excellent IPA offering. I'll be buying more.

On tap, poured into a pint glass.

T___Some hop bitterness, but not a lot. Pine, grapefruit & orange follow from the nose. Add in some lemon. Nice.

O---Nice offering from a good brewery. I'd have another one.

Nice hoppy IPA with lots of citrus notes, biscuit and malt in the backbone of the taste and aroma, along with orange peel, lemon zest, mild floral hops and spices. Well balanced and almost refreshing, this was a nice enjoyable offering.

Poured from a brown 12 oz. bottle. Has an orange color with a 1/2 inch head and lots of floaties. Smell is of citrus, malts. Taste is of tea, citrus, caramel malts, light to moderate bitterness. Feels medium/full bodied in the mouth and overall is an enjoyable beer.

Great beer, super hoppy and piney. They describe it as a cross between a west coast and New England ipa, but the west coast is much more prevalent to me.

A: The beer is hazy to cloudy yellow in color and has some hues of amber. It poured with a quarter finger high white head that died down, leaving a thin layer of bubbles on the surface and a collar around the edge of the glass.
S: Moderate aromas of grapefruit and orange citrus are present in the nose along with hints of pine.
T: The taste follows the smell having lots of flavors of orange and grapefruit citrus with notes of caramel malts and hints of pine. There is a light to moderate amount of carbonation.
M: It feels medium-bodied and both crisp and juicy on the palate with a moderate amount of carbonation.
O: I thought that this hybrid between a West Coast IPA and a New England IPA was a novel idea as it really blended the two styles together. Perhaps one should then call this a "Midwest IPA". Any traces of alcohol are well hidden from the taste.

Decanted from a 12 oz (355 ml) bottle into a conical pint glass; no production information.
A: Pours a hazy, amber color with dramatic head formation, leaving a one and a half inch head initially, solid retention, and copious rings of lacing.
S: Aromas of grapefruit, caramel, and pine.
T: Palate follows the nose. Moderate bitterness completes the picture.
M: Medium bodied with excellent carbonation.
O: Hippotizing IPA is a straightforward, but exceptionally enjoyable American IPA. In this era of complex, extravagantly hopped, flavor forward IPAs, this stands out a classic, yet contemporary interpretation of the style.

Poured from a 12oz bottle into a Speiglau IPA glass.

Look is a slightly hazy orange with an off white head.

Aroma is an orange blossom honey.

Taste is bitter with a nice honey sweetness balance.

Notes via stream of consciousness: Well it's got a nice head on it, I'll have to wait for it to settle, but it's also quite cloudy. It's a brownish amber and the head's off-white. It smells like a "real ale" with the yeast coming through amidst caramelish malt and citrusy hops. On to the flavor... similar as expected, but with much more hop flavor. I'm not sure why the hop aroma's so limited because the flavor's not. I'm finding notes of orange, berries, grapefruit, pine, earth, mango, and a little bit of lemon. They work well with the sweetish and grainy pale malt base, and a solid bitterness backs it, balancing the sweetness and bringing it to a mostly dry conclusion. Oddly the hops don't linger nearly as strong as you might expect given their contribution upfront. That's OK though, it's a unique ale. It's medium bodied and gently crisp. Worth trying.
Review# 5,931

Sampled at SAVOR 2017. This had an earthy and dank scent, with a dank and bitter taste with some pithy citrus. It was a nice crisp brew, but not top tier.

Poured from a bottle -- cloudy golden, nice foam, surprising amount of sediment. I picked this up because I love Mosaic and dry hopped but think this attempt needs some significant refinement. Heavy bitter grapefruit could be nice, but floating about, not anchored in by any malt backbone. Gets better as it warms but still think this one needs to go back to the drawing board.

The eradication of The Bottle Backlog, while arduous & painful, has had at least one example of The Law of Unintended Consequences. In this case, it has been my ability to conduct a buncha brewery horizontals (same brewery, different beers & styles). This is next entry in my current horizontal, that of River Horse BC in Ewing, NJ.

From the bottle: Nada, except the same spinning eyeballs that ppl seem to mistakenly equate with a lack of awareness in me.

I Pop!ped the cap as I am wont to do & began a gentle pour, thanks to the presence of LOTS of floaties in the bottle. Nose smelled like a bag of fresh dank! Holy Jeez-O, man. Thick, earthy, home-grown. Wow! An in-glass swirl raised a finger of foamy, rocky, bone-white head with good retention. The nose initially smelled of blueberry pie, but warming, I would have better characterized it as a blueberry muffin. Mouthfeel was medium. The taste was very blueberry, but with whiffs of bread or biscuit, depending on temperature. Finish was dry, but not the kind of dry normally associated with an AIPA. YMMV.

Look... Poured heavy into a frosted pilsner glass. Big three finger creamy head contributes to heavy white lacing. Color is a cloudy light gold. Smell is mostly tropical citrus and some malt. Flavor is complex blend of grapefriut upfront then pineapple and Orange peel. Mouth is medium with lasting ample carbonation. It grew on me while drinking. Very fine IPA.

Cloudy gold color from tap at brewery. Slight malt aroma but mostly hops,citrus,tropical hits the nose. Taste is identical to aroma,bitter but not to the extreme. Not a huge ipa fan so i probably am biased so the score should be higher

East is east and West is west, and sometimes the twain shall meet. This 7.5% hop bomb gets better with each swallow. The Mosaic gives it an east coast pedigree with tropical fruit early, but the Falconer's Flight adds a west coast, grassy vibe to the finish. Medium carbonation and mouthfeel, with a nice malt backbone that doesn't overpower the hops. Clean, dry finish, too. Nice beer, but mind you P's and Q's with that ABV.

This is my introduction to mosaic hops, and it tastes just like a mosaic is supposed to: citrusy but mellower than citra. Less grapefruit and more orange and pineapple. A nice balance of bitter and juicy in this IPA. If I lived nearby, I'd buy it again.

NE one-up-manship - basic requirements are: cloudy, hoppy, approx 8.0 abv. To make this stuff you need to figure out how to homogenize a portion of the yeast sludge/sediment from the bottom of the fermenter. Do I sound critical - no I'm jelous. But I do believe the pedulm is at its apex on this redition of the style.

On tap at White Dog (Philadelphia) served in a stemmed tulip

Hazy burnt orange color with a half a finger of cream colored foam. Moderate lacing. Nose leaps. Mango, pineapple, orange rind, and bit of earthy bitterness. Flavor profile follows the nose. Feel is a little thin, but the flavor profile carries well and is not too far out of balance.

Full disclosure, I had low expectations for this beer as most Riverhorse offerings are average, but this was a pleasant surprise. I will be buying this again.

Deep yellow with an orangish hue down the middle and a heavy haze. Poured with a short, creamy, bright white foam with moderate retention. Medium high citrus and fruit hop aromas with light, spicy, onion-like aromas beneath. Medium bodied with medium light carbonation and pleasant warmth from the middle to the end. Medium light supporting malt aroma. Sharp, spicy, onion-like hop flavors up front that quickly transition to citrus hop flavors. Medium hop bitterness through the middle as spicy hop flavors persist through the middle to the end. Finished with a spicy, herbal hop bitterness that don't persist. Nice hop aroma and flavor complexity and easy drinking for the hop lover.

Mouthfeel is crisp and bitter, but the bitterness is complimentary; in the middle the NE style shines through with softer presence and near 'creaminess' with soft malt additions (cara-pils it appears).


Hippotizing IPA from River Horse Brewing Co.
Beer rating: 89 out of 100 with 121 ratings