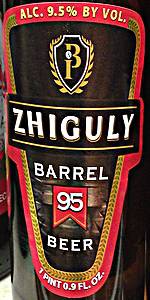 Notes:
View: Beers
Reviews: 8 | Ratings: 13 | Log in to view all ratings and sort
Reviews by biboergosum:

500ml bottle - I remember another beer from this brewery as being one of my first reviews, and one of the most horrendous brews that I had ever had (that's called foreshadowing, kids!).

This beer pours a slightly hazy, medium copper yellow colour, with two fingers of puffy, loosely foamy, and bubbly dirty white head, which leaves pretty much nil in terms of lace anywhere near the glass as it quickly subsides.

It smells of buttered stale corn, phenolic yeast, rubbing alcohol, way overripe drupe fruit, and a strange bitterness that I do not believe is hops. The taste is grainy and well-toasted pale malt, corn grits, some still muddled and musky generic fruitiness, cotton candy, wet metal, an estery booziness, and some very tame earthy and dead floral noble hop bitters.

The bubbles are adequate in their generally supportive frothiness, the body a solid middleweight, as buoyed to the nuts by the various sugary notes as it is - so, smooth? Sure, why the hell not? It finishes sweet, the big 'malt' and various fruity characters the inmates who run the asylum.

Yeah, while this isn't as patently bad as the Grand 9.5 (watch, they're probably the same damned thing, like when Homer bellies up to the bar during the Duff Brewery tour on the Simpsons), the intervening years have seen me become more tolerable to the avails of the broad brewing world. Also, I would recommend this 'barrel' beer to anyone seeking the brain freeze (not Slurpee-related) that I am currently experiencing.

16.9oz bottle poured into 12oz tulip. Much like the other examples of the style I've tried, the beer is sweet, and has a bit of an alcohol bite. A lightly cloudy honey gold color, with over an inch of white head that had no retention or lacing. The body is thicker than most lagers. Drinkability is decent, for a 9+% brew. Overall, not a bad tick, not a great one. Worth the $3 if you see it.

Poured into a Seattle Beer Week pint glass. Pours a medium golden amber with a fine, half finger white head with great retention and nice lacing. Aroma of bready lager malt, a little caramel, sweet, overripe fruit and mild citrus. Flavor is sweet adjunct lager malt, lemon, mixed light fruit, grain and corn. Develops an odd astringency in the finish with citrus rind notes. Medium bodied with sharp carbonation. Lithuanian big lagers are kind of predictable, and this one is a bit better than most; the start is like a boozy adjunct lager with the mildly sweet, inoffensive malt, but the hops assert themselves in the finish with the noted aspirin like astringency. Drinkable, and an entertaining tick from a new brewery, but like several other strong lagers from this part of the world, it seems to promise a headache in the morning. Odd that this profile is so ubiquitous in the Balkans.

Poured from a brown 16.9 oz. bottle. Has a light golden color with a 1/2 inch head. Smell is of brown sugar, malts, a bit on the sweet side. Taste is alcohol, malts, a lingering sugary sweetness at the finish, and aftertaste as well. Feels medium/light in the mouth and good to try if you want a high abv beer from Lithuania, but otherwise a subpar beer.

Hazy yellow color, small quickly dissipated head, minimal lacing. Strong smell of alcohol (or something other than the hops mentioned on the label). Sweet like an adjunct lager, but boozier. And what's up with "Contains Sulfites" on the label? Never heard of Sulfites in beer, let alone a label warning about it. Don't plan to ever drink this again.

My turds in a tea bag resting in water over a week would create a beer infinitely superior to this garbage. I am gonna punch my friend in the nuts for pouring this in my glass. Free tip: don't drink this.