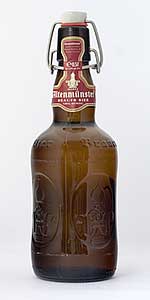 Notes:
View: Beers
Reviews: 25 | Ratings: 60 | Log in to view all ratings and sort
Reviews by Curiosibeer:

As good as a Helles gets.

Clean body, lightly bitter and dry aroma. Body is light but flavor is strong. Classic beer flavor with pleasant lasting aftertaste. The finish lingers. Something like this should be marketed in the US at an affordable price. BMC would clearly be exposed for the difference between what they market and what they actually make.

Poured a tall, creamy, off-white head that lasted for a minute or so. Pale golden beer showcases a swarm of carbonation. A faint sweetness from the malt and bit of grassy hops make up the aroma. The mild grainy sweetness from the pungent hop flavor. It's a mix herbal hop flavor along with a chewing bitterness that make for a solid hop punch. The flavors hold strong well after you swallow the beer, and the bitterness sticks around into the next morning. A solid Helles Lager, and if you're into hops then this one is for you.

The colour is medium yellow with a weak tint of gold. The high foam slowly sinks down to an uneven finger thick head. There are some traces of lacing.

The smell is very malty and fresh. Lots of bitter-aromatic hoppy notes. Some sweet notes and a hint of alcohol. But it is mostly malts going on here.

The taste is also very malty, but it doesnt get heavy. It is also balanced by a clean and robust bitterness and some light notes of grassy hops and buttery notes. The aftertaste is mild and very harmonic with flowery and bitter notes.

This is a highly drinkable, uncomplicated beer with a lot of character.

appearance: clear almost seltzer like bubbles not much of a head

smell: pilsner like hop smell, woody with a bit of nuts on the edges

taste: bit bitter with a watery flavor, not what I thought it would be, sharp edges

overall: I was a bit disappointed in this brew just not what I expected. I am not a hop head

There appears to be two entries for this beer here. This one (with rating B+) and another under Urig Wurzig (with rating D+), both with the same label in the photo. Such disparity!

Pours a slightly hazed golden yellow colour, with a crackling head that dissipates rather quickly, leaving a slight collar of large white bubbles and a film that replenishes itself with the fine carbonation. It's a shame about the lack of head retention, but otherwise, it's a suitable looking Munich Helles.

Nose is pretty decent. Nice German grain character, with a rustic, cleansing crisp malt character, and just enough hops to balance—a slight hint of carbonic acidity and citric tartness. It's subtle, but it allows the malt to do its thing, and that's its job.

Taste is light, but pleasant enough, with a singing sweetness on the back that shies away from being sickly, what with the very light body, and the upswell of grain characters that give it a more savoury tone. Minimal hop bitterness, which is a little bit of a shame, because I can imagine the hops just cutting back the sweetness again a little.

It's a pretty decent stylistic example. Clean enough, with some classic characters. No, it's not a beer to knock your socks off, but beers of this style aren't meant to do that. It's just clean, correct and quaffable.

Appearance is more then just ok pooring in with a thick and lasting head and a beautifull actually quiet dark golden beercolor. Nose is very malty, litle yeastarome and litle hops in the background. Taste is also full matly, "suffig", and full before going into a nice and bitter aftertaste. Mouthfeel is as expected from a Hell full and fresh. And hell yes I would love a couple more! Tasted bottle was best before 10-08-05.

The beer looked fine, clear and wholesome, a fair sized clean white head sat on top of the glowing liquid, hoped it tasted as good as it looked.

Odourless, normal pilsner/lager/helles nothingness. Am I the only person on BA who struggles to pontificate about these styles of beers aromas? It gets my standard lager score of 3.

Maybe I wasn't thirsty enough, maybe I wasn't hot enough. This was just a normal German light beer to me. OK, it was soft, clean and smooth tasting, but it was nothing special in any aspects. Nothing made it stand out from the crowd (apart from the bottle design).

Had this beer in St. Goar, Germany on a trip around the continent. Small town, right on the rhine.

Taste: This beer is balanced, bitterness with grassy hops and buttery notes. Medium carbonation, very drinkable, but overall there beer is nothing spectacular. But.. Helles Lager v American Pale Lager, hah, no comparison.

A: Pours a bright, clear golden color. The clean white head is very tall, with a dense, frothy texture. Retention is very good, and a nice amount of soapy lacing sticks to the glass.

S: Doughy, bready maltiness in the nose. Somewhat grainy, with some sweetness. A bit yeasty and musty. Noble hops are pungently grassy and herbal, per the style.

T: Again, a doughy, bready character is most prominent. Yeast character is prominent, with some lightly fruity (white grape) notes. Noble hops are very pungent, with sharp floral and herbal character. Bitterness is fairly high for the style, building gradually into a strong bite. Slight alcohol in the finish, if that can be believed for 4.9% abv.

D: A raw, rather hoppy Munich Helles lager. The malt bill is definitely to style, but the hop presence is much closer to a pils than most other Helles lagers. It lacks some of the polish that the style typically has, but makes up for it with a bolder flavor and more assertive hoppiness. A nice offering at any rate.

Light malty flavour with a crisp, bitterness. Slightly grainy with just a bare hint of fruitiness.

A nice, easy drinking Helles Lager with decent flavour. This is definitely not a challenging beer but a real step up from the standard Australian lagers.

Bright golden amber body with a very crisp clean appearance and haze or cloudiness. Generated a huge white and fluffy mass of head that dried away fairly rapidly.

Aromatically, there isn't much to report other then a very soft yeast and peppered with malt aroma that is rather one dimensional and consistent.

In the mouth this is definitely very fresh, clean and crisp with malty notes and floral hops coming through.

Light to medium carbonation and light bodied. Overall there is not a lot to jump up and down with this offering, particularly so if you have tasted the style from many other German and Austrian brewers.

It is always hard to critique this style, mostly because of the close similarities between them and the brewers requirements to fit within rigid parameters. However, great examples always stand out and this definitely isn't a stand.

Having said that, if you want a Pilsner and you love the style and this available to you then I recommend trying it.

A: The color is clear golden. The white creamy head is rather tall but quickly settles into nice lacings.

T: Light, but true to the style; malt, semi-sweet. Citric notes and some bitter hops in the back.

M: Aftertaste is short, but bitter. Body is light and carbonation strong.

O: A nice Munich Lager, goes down so very easy...

Bought this on a short trip to Germany. 'Urig und Würzig'... the red label... It's been reviewed in several different identities, and I'm a little surprized to see the rating varies from A- to D+, when it defenately looks like the same product.

Looks golden colour, with a decent head, but hardly any carbonation.

All in all an ok experience, but nothing special.

Poured from a 50cl bottle into a tulip.

A - Classic bier look! Beautiful finger of fluffy head with a golden ale below. Distinct column of carbonation bubbles streaming out from the middle of the liquid. Almost ad-worthy.

M - Slightly spicy on the tongue but with not much else going on..

D - Pleasant and easily drinkable but a bit strong on the wheat/malt thing at the start. No problem knocking back a few of these.

A: Clear yellow color with a not totally thin body, rich carbonation that lets a layer get formed on top of the bear and build a big head at the beginning that dissipates but leaves traces behind.

S: Malty smell as the style dictates, almost no hops but maybe in the back they are present, the barley is the main ingredient in this beer.

T: The flavor is good based on malts basically barley malts with some little hops and some spicy character, very faint but present.

M: The sensation is nice and the drinking of this beer is good nothing complex but pleasant.

Very refreshing beer with good flavor/taste. Very smooth indeed with no after taste which is what good beers do best.