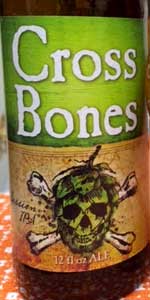 Poured from a bottle into a pint glass. Pours translucent yellow orange with a small white head. Smells of tropical fruits and citrus, but a tad weak. Tastes of some citrus hops with bland grain. Beer is light bodied and easy drinking, but a tad overcabonated. Overall, an above average beer.

S - Like a peach yogurt creamsicle at first, then biscuit and floral.

O - The flavors, while bold and unique for a Session IPA, aren't in my sweet spot. Interestingly, I liked it much better with about 6 months age on it than I did when it was fresh. This reviews reflect a combination of the two tastings.

The eradication of The Bottle Backlog has created the possibility for many brewery horizontals, most notably New Belgium, but here comes one that is going to be a LOT of fun. I have known owner Hugh Sisson since he was the owner & brewer at Sisson's Brewpub in BAL before going on to open Heavy Seas. His head brewer is now Chris Leonard, former owner & brewer of the GEN Lafayette Brewpub in PHL & I once wrote a great Beer Pest piece about his (now ex-)wife, Kristen. As if all of that were not enough, I am a retired U.S. Navy sailor who spent a LOT of time aboard ships and underway, so nautically themed beers are right up my alley. When I conducted my massive horizontal a couple of weeks ago, this one was not available to me. I am just trying to keep current.

From the bottle: "Full on hop aroma with surprisingly rich mouthfeel, this session IPA delivers a broadside of flavor without getting your powder wet!"; "Clean Water Fund [-] A portion of the proceeds from each case of beer we sell goes to help CleanWater.org, a national organization dedicated to protecting the quality of the water we drink and the water we use to brew. Can't make great beer without clean water! Finds from the sale of this beer go back to the region where it was purchased."

As a Storekeeper ("Box Kicker"), my rating was identified by Cross Keys, but I like how the skull has been replaced in these Cross Bones. To celebrate, I Pop!ped the cap and commenced a gentle pour as is my current wont. Once accomplished, I roiled the waters with an in-glass swirl that raised two fingers of foamy, rocky, tawny head with decent retention. The sticky lacing that remained in its wake was a reminder to run the dishwasher later. Color was Golden-Amber (SRM = > 5, < 7) with NE-quality clarity, which prompted a visit from The Gelt Gang of Mammon, Midas & Croesus, all clamoring for a taste. Nose had a strong grapefruit & lemon citrusiness & my mouth began to water as it is wont to do. Mouthfeel was medium, but highly carbonated, giving it a spritzy quality in the mouth. Speaking of spritzy, the taste was like lemon-lime pop (think Sprite, 7-Up, et al)! Talk about crushable! On a hot, humid summer's day, I could really get into a few of these. Finish was semi-dry, not overly bitter and very citrusy. Now, if I CAN CANvince Hugh & Chris to put this beer in CANs, I'll really be all set.

Appearance: Clear amber body beneath a finger-thick head of frothy white foam. The head retention and lacing are limited.

Taste: As the aroma suggests. The malt is honeyish with just a hint of golden caramel to it. There's some yeasty apple-like fruitiness that gives it a little more life, and a touch of pine and earth in the dry, median-bitter finish. Nicely balanced.

Feel: Light-medium in body with a restrained, moderate carbonation that leaves it smooth across the palate.

Overall: A basic beer. My first impression was that it smelled like so many pale ales used to 20 years ago. There's some bitterness to it, but not really that much more than you'd find in most pale ales, and even less than some. The strength is at pale ale levels as well... I'm not sure why this is labeled as a "session IPA" given that the hops aren't really that elevated, especially in the aroma. I do appreciate their choice of hops, however, and it's refreshing to find a "session IPA" that isn't all citrus and tropical fruit. And it's really quite drinkable. It reminds me of a good English bitter - the original session beers!

A- clear light yellow color with no head and minimal lacing.

M- dry and slightly hoppy. light bodied and dry hoppy fruit on the back end.

O- decent but needs some work. I think the pine needs to come through in the nose more and the bready malt needs toned down but a good beer.

Ok for a session ale. Nothing too memorable. Although in comparison to some of the other session ales on the market, doesn't have the hop juice punch and is more balanced. Bought from Total in Bmore with 1 month until best before date (unsure of bottled on date).

On tap at the Heavy Seas Alehouse. Not a bad choice when looking for something of a milder ABV. A light yellow/orange color. Smells hoppy and fruity, but in a very subtle way. Tastes like a typical session IPA, though balanced nicely. Nice smooth and light feel. Overall it's good but far from memorable.

Pours a golden amber color with a fair amount of clarity and a medium strength head that leaves some creamy, frothy lace but doesn't really last long enough. Nose is light malts with buttered bread notes.

This has a reasonable amount of flavor, but this is not really on style in my opinion, as the hops seem to be less west coast and pine/citrus as oppossed to old world medicinal/spicy/sour hops, although that changes a little in the aftertaste. Solid effort on the texture. Certainly worth a try, but not really my cuppa.

Pours a medium amber color.
Smell is lightly floral and pine.
Taste is mostly pine with a hint of citrus.
Has a bit of a bitter finish.

Nice cloudy amber color, aroma of pine,malt,slight citrus. Taste is hops,malt, but little aftertaste. A nice IPA, drinkable. On the same level as a Yards IPA.

From the bottle, it pours amber with a small head, quickly dissipating. Light scent of pine in the nose. Light flavor as well. Easy drinking beer. Have another!

On cask with hickory, pecan wood, dried cherry, and orange peel. Def made for a more drinkable experience than the avg session IPA. Can't speak for the base beer alone, but this was nice.

The beer pours out into a Duvel glass a clear, dark amber color with a 1/2" head the soon begins to slowly recede leaving some foam and lacing around the sides of the glass. Sipping creates a few patches, small speckles and stripes of lacing. By mid way through the beer there are still patches of lacing on the sides, some of the ring of foam and small patches of thin foam here and there on the surface of the liquid.

The aromas include a crackery smell that dominates the others, which include a hint of pine and some grapefruit pith.

The flavors are also dominated by the crackery character up front with some touches of pine, citrus pith and even a bit of herbal character.

The mouthfeel is on the light side of medium bodied with a touch of prickliness from the moderate, persistent carbonation. The finish begins as the up front crackery character begins to fade, allowing the hop profile to emerge. That then slides to the background before disappearing and leaving the pithy bitterness to linger and then slowly fade.

While I enjoyed trying this beer, it hasn't made my list of beers to try again, especially since its Loose Cannon big brother is one of my favorites. However, I could see having this beer during the grilling part of a BBQ party as it has relatively low ABV, is easy to drink, and helps prime one for the more flavorful meal and beers to follow. That all said, my personal preference would be for a tasty Pils rather than a session IPA.

On nitro at City Tap House, DC. Smooth, fruity, mild hops, lots of citrus. Light bodied, but flavorful. Hops, malt floral notes. Check it out, hard to believe this is a session beer.

Had at a tasting ....a small amount in a pint glass. Even with a small glass the aroma was there. The taste is good with little malt backbone and a nice bitterness.

Appearance: Pours a slightly hazy honey color with a modest head that dots that glass

Smell: Crackery and slightly earthy, with a hint of pine

Taste: Crackery, up front, with a lemony/piney/herbal flavor profile building, in the middle; clean and dry, in the finish; pithy in the aftertaste

Overall: Not so crazy about this session IPA; neither the malt nor the hop bill is really appealing

a decent enough session ale with enough personality to keep you interested. I may not go to great lengths to acquire this beer, but I certainly wouldn't turn it down either.

This is a really light, session-able IPA, almost a light gose or saison. It would be easy to drink a lot of these, but I would get bored with the lack of depth and intensity of flavor. A great beer for a very hot day after lawn mowing, but nothing I would buy again.

A thanks to the captain of the canship, woodychandler, for this beer. Poured from a 12 oz. can. Has a dark golden/orange color with a 1/2 inch head. Smell is of pine, light citrus. Taste is piney hops, malts, some citrus, finishes dry but with very little bitterness. Feels medium bodied in the mouth and overall is a solid beer.

Poured from a 12 ounce bottle into an Altamont glass. Best by June 2015.
3.75/4.25/3.5/3.5/3.75
Cloudy orange with very lit
tle head.
Smells surprisingly malty and fruity. Melons and lemon zest and brown sugar.
Slightly stale pale ale with an odd, super-vegetal note on the end taste. The malt is one-part biscuity-dry and one-part sweet and round.
Overall, a citrusier Naked Pig and an enjoyable low ABV beer. Probably won't buy again.

CrossBones Session IPA from Heavy Seas Beer
Beer rating: 81 out of 100 with 336 ratings