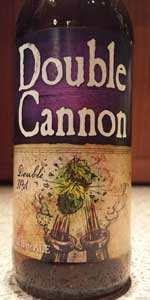 Notes: Hop aromas blast ouf of this flavor explosion. Massively dry-hopped, with a balanced malt sweetness, this irresistible force showcases the power of bringing in the extra artillery. Hop cubed – then squared (hop to the sixth)! We’ve kept the same malt recipe proportions as Loose Cannon, pumped up to 22 Plato (from 16.5) and then doubled the hops. We employed the late addition-, whirlpool-, hopback-, and dry-hopping process that makes Loose Cannon such a flavorful IPA. We’ve captured the beautiful balance of Loose Cannon but we’ve doubled the firepower.
View: Beers | Place Reviews
Reviews: 97 | Ratings: 437 | Log in to view all ratings and sort
Reviews by Shroombe:

Ironically, not as much of a hop bomb as loose cannon.

Mouthfeel: Full bodied, lingering bitterness, too much alcohol presence for 9.5%.

For how good Loose Cannon is. This beer is a total disappointment. Malty, bitter, boozy. Total let down - and 120 days from the best by. Dare I say an embarrassment to double IPAs everywhere. Heavy Seas, I love you guys. Stop making this beer.

I tried this from the bottle in a pint at Scales in Carlisle.

The color is medium amber with a moderately hazed clarity and 2 fingers of cream with fine bead. The smell is very interesting with a mix of floral and pine with slight apricot ester (yeast?) and gentle malt in the nose with a subtle sweet scent. The feel is very good with medium high bitterness up front with light malt sweetness mid palate and subtle yeast creaminess with light alcohol in the semi-dry finish.

The taste is very good with hop flavor that has slight fruitiness of yeast accompanying with a mild malt that has slight caramel element and some stone fruit flavor in the mix with hops/yeast cohesiveness adding to the moderately strong alcohol in the taste. This is a good Imperial IPA, pretty decent hop flavor-not the best for pure hop enjoyment but a well made and more balanced take on the style with more yeast than hop dominance.

Malty with a good battering hop. I would be interested in knowing what hops were used but more which malts. I think double cannon is a but if a misnomer. It makes me think this is going to be a hop extravaganza. When in fact it is more of a hop sideshow. It is a balanced beer but not a hop double cannon. Still for under 10 this is a good DIPA

I first found the Heavy Seas brew at a local bar on happy hour. I had stumbled upon the Loose Cannon variety and had this as one of my go-to beer for a while. Today I found a 6 pack of their Double IPA called Double Cannon. If you’ve ever had a Rebel Rouser DIPA by Sam Adams, then you will very easily be able to discern the flavor of this beer by just reading my review.
Look: This beer pours a very clear medium golden color with a small head; granted the beer hadn’t fully chilled before I impatiently pulled it out of the freezer to try. Then later I poured the colder one and the head was still very small. It was appropriate for this beer though and was about half an inch thick.
Smell: What’s funny though is the aroma isn’t as strong as some other beers so you will have to take a big whiff to get it clearly. It smells of earthy hops and toasty cracker. A very pleasing smell that I can’t get enough of.
Taste: The flavor is great. The carbonation hits first coupled with the malts which aren’t honey based this time. Instead, you get a toasty cracker and oats flavor which is very nice. By comparison, the Rebel Rouser has a honey-based malt. This beer has a solid 9.5% ABV and 90 IBUs, but drinks like an 8% and 80 IBU so be careful, because it will sneak up on you. You won’t feel very tipsy until the end of the second one if you drink them at a moderate pace. The malts give way to Orange peel zest, citrus, pine, tangerine, fleeting oak, raisin, and mango, then a bubblegum based flavor. The resinous coating on the tongue lingers long and savoring which begs you to take another refreshing crisp gulp.
Mouthfeel: The feel is great with a smooth crisp feel that gives way quickly to the tickle of the carbonation. There are only a couple minutes before the head disappears and since it is a clear golden color, you can see to the bottom.
Overall: Overall this beer is excellent and has made its way to near the top of my list of favorite beers easily making the top five of my favorites which includes giant brewers such as New Belgium, Sam Adams, and Sierra Nevada. It is a crisp, refreshing, complex, and enjoyable Double IPA that won’t disappoint. I recommend this for every IPA lover.

On tap at Slow Rhode in Providence, served in a can glass. I had the first brew off this keg.

Aroma: solidly hoppy, pungent aroma. Lot of pine here, some caramelly malt, slightly sweet. I hate to say this, but I can tell by the smell that this is gonna be too sweet and malty for me.

Taste: the smell and look definitely did not fail as a predictor of flavor for me. It's pretty sweet and waaaaaaay too malty for a modern double IPA. Lot of pine and bitterness, not much hop character at all other than that. Reminds me of a much less successful 90-minute or Hop Juju.

Feel: sticky icky in a good way, sweet and sugary in a bad way.

Overall: there are so many better DIPAs out there. I say this as a fan of Loose Cannon, but I was expecting more hops out of this and much less malty sweetness.

The philosophy behind this beer is all wrong. The flavor and aroma underwhelm relative to the ABV. If you're an adult the beer is a failure.

On tap and enjoyed from a snifter.

Good but not up to par with the competition. Very smooth mouthfeel and goes down easy but I wish it had a better nose and showcased the hops more. More of a malt smell and taste. Hops are there but take a backseat. Prefer the regular version but still, not bad and glad I tried it.

This was recommended to me a few times and my local liquor store just got a fresh shipment so I figured I would give it a try.

S - Nice change of pace from your typical West-Coast DIPA. This beer has resin, dank, and pine first and then comes the secondary citrus and orange peel. There is also quite a bit of malt, ale yeast, and some alcohol coming through.

T - Again like the smell there is a sweet candy like resin character with dank, orange, citrus, and the malt. In the middle there is more of the malt, caramalt, and some of the yeast character rounding it out. The finish is slightly boozy with a stern bitterness to compliment the sweetness that's throughout the front half. You can tell that there is a good amount of everything in this beer.

M - High mouth-feel. Low to moderate carbonation. This beer is pretty thick with the malt body and that much resin from all of the hops. The 12oz bottle is perfect for this beer because anymore and it might start to wear on your palate.

Overall, this beer is a very good rendition of the "East-Coast" DIPA. Instead of the big citrus and floral hops in full force for a West-Coast DIPA this one has a strong resin and dank character along with a lot of sweet malt to balance the hops which adds to the difference from coast to coast. This isn't going to be my favorite DIPA but I will definitely be getting this again when I'm in the mood for big impact and not just the grapefruit bomb of the west-coast.