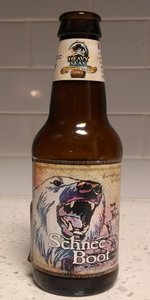 Notes: The strongest beer that we've ever created, Schnee Boot is dark, malty, and roasty with hints of cocoa, vanilla, and dark fruits. This beast of a lager gets additional complexity from bourbon barrel aging. Inspired by Antarctic exploration, Schnee Boot (Snow Boat) is the vessel to transport you to a far away tundra.
View: Beers | Place Reviews
Reviews: 20 | Ratings: 45 | Log in to view all ratings and sort
Reviews by NCSapiens:

L- dark brown, almost black with light tan head that quickly dissipated with little lacing.
S- not detecting much aroma other than faint barrel smell.
T- taste of a barrel flavored Eisbock is interesting. The main flavor is bourbon with a malt backbone. Very drinkable for such high abv. Not much hops. Very unlike bourbon stouts.
F- a bit watery but quaffable.
O- I’m glad Heavy Seas made this beer. It’s an interesting change of pace. Some of the highest alcohol per dollar I’ve seen in a beer, and fun and drinkable to boot. I wouldn’t seek it out, but it’s worth trying if available.

Wonderful stuff, right up there nearly the equal of Aventinus Eisbock, raisen-y bourbon cake taste, low carbination, little taste of the 13%. One of my dislikes is an alchohol bite, this hides it's strength very well. Prolly the best heavy seas beer I've tasted, and I live 10 minutes from the brewery.

Poured a ruby-tinted brown with minimal head and little lace ring. Aroma is slightly boozy and woody but mostly contains dark fruits like figs. Medium to heavy body, slightly sticky sweet from a hint of vanilla but mostly a figs and dates sweetness, touches of dark fruit, spice and at least boozy heat (really the abv is subdued), and a semblance of woody smoothness. Really good and heavy sweet beer worth sipping on.

A: A late forming dark bronze-tan head provides a loud fizzy calling as it quickly dissipates. The deep garnet red pour appears more of a dark sherry in the vessel.

S: Boozy bourbon caramel and raisins on the nose. Spicy and very smooth. Vanilla, rich chocolate, but is the barrel aging and spicy rum/bourbon like scent that really comes through. Some sugary cereal grains.

T: The flavor as with the nose, provides a hearty dose of the bourbon barrel aging. Spicy sugary raisins and figs, with sweet specialty grains. Lots of sweet dark fruit, plums most notably, the boozy bourbon again is prominent. Coffee and chocolate, sweet caramel and a spicy alcohol bite, an almost festive like flavor along with some cinnamon and Belgian candy syrup.

O: Overall a beautiful flavor and thick and chewy mouthful. Lots of spicy rum/bourbon like accents, dark fruit and sugary raisin and figs give a festive and boozy nature and impression. Lots of carbonation texture, but very sweet, may be best to split this one with a friend.

A: Medium brown in color with a tan head.

T: Big beautiful malt, sweet and rich. Like a vanilla caramel truffle with a bourbon chaser.

M: Medium in body with medium high carbonation, despite that there is a nice syrupy quality to it.

Will try another 4-pack of bottles ! Very Good Eisbock.

Appearance: The body is dark brown and light is barely visible through the edges. It has a very short off-white head that quickly dissipates. No head retention or lacing.

Aroma: It has a pleasant vanilla and wet oak scent.

Taste: It has a very enjoyable mix of flavors; vanilla, caramel, toffee, a touch of coffee, and a woody undertone. The flavors are very consistent throughout the beer. Every sip is full of flavor from the start to the finish of each drink. As the beer warms up there is a touch of anise to the beer which is lovely.

Mouthfeel: The mouthfeel is fantastic. It has a smooth texture with a liqueur thickness that coats the palate. It does an amazing job of keeping the flavor glued to the tongue at all times. The finish of the beer lingers nicely. It's exactly what you would want from a beer like this. The beer does an outstanding job of hiding the "13% ALC/VOL" (as indicated by the label).

Overall: It's a fantastic beer and it is very enjoyable. I would highly recommend it to those who enjoy Eisbocks, higher alcohol Doppelbocks, wood aged beers, Barleywines, or Winter Warmers. I really wish this would have been available to me earlier in the season. I would drink it again.

O- A nicely done and balanced Eisbock. The amount of carbonation is a lot higher than I expected.

Dark, opaque brown beer that produced a modest beige head. Nose is nearly equal parts currant and biting alcohol. Even as it warms up, just not much else. Taste tells a slightly different story as dark cherry, raisin and sweetness offset the massive heat. Despite being really hot, there is a little more body than I expected from as high an ABV. Aftertaste is primarily that alcohol bitterness.

T- sweet, malt and boozy with notes of caramel, dark fruits and brown sugar up front. Mid-palate gives notes of molasses, oaky bourbon, vanilla, chocolate as tobacco. The finish gives more malt sweetness with a linger of booze and caramel

O- a boozy malt bomb that is complimented nicely with the bourbon barrel, well done

I got a late start on this past Sunday's NBS (Week 774) & I did not finish up my DelMarVa (+ DC) adventure as planned. 8=( Further, I have promised that next week's NBS (Week 775) will be dedicated to the wonderful beers sent to me by @jkblr who seems to have a real handle on my drinking habits. CANsparency is key in these things! As a result, I am going to CANcentrate over the next few days on eradicating everything that would have CANbined to form the finale of the DelMarVa (+ DC) adventure. Sit down, strap in & hang on. It's gonna be a wild ride!

Speaking of wild, I am now shifting over to a couple of bottles!

From the Bottle: "Uncharted Waters"; "Dark, malty, roasty with hints of cocoa, vanilla, and dark fruits, this beast of a lager gets additional complexity from bourbon barrel aging."; "Barrel-aged Eisbock"; "Uncharted Waters explores the unique changes that happen to beer when exposed to wood. Each Beer showcases a robust style, carefully matched with a wood treatment to produce a range of complex flavors. Vintage dating encourages further exploration of the aging process. As much about the voyage as the destination, we hope you enjoy these beers in the spirit in which they were brewed."; "Fearless. Bold. Independent."

I had my Friendly Greek Bottle Shop (FGBS) snifter at the ready & as soon as I Pop!ped the cap, I was ready to go. I went with a slow, steady C-Line pour that created a brief finger of foamy, fizzy, deep-tan/light-brown head that could not wait to return to wisps, becoming a mere skim on the surface. It was at this point that I realized that I had not reviewed many beers in this style so I refreshed myself using the site's updated Style Guide. Color was Dark Brown to Very Dark Brown (SRM = > 27, < 34) with NE-quality clarity and mahogany highlights. 8=O Nose had a definite fusel alcohol presence & the bourbon barrel aging was quite evident as the fumes wafted into my sinuses. 8=O Once more, the smell of coconut was what really stood out. Mouthfeel was medium, but I was hoping for a bit more of an assertive presence, frankly. The taste was mosdef coconut, toasty, tasty coconut!

I have liked coconut since I was a kid & I realized early on that I was a bit of an anomaly. I would seek out the coconut-filled treats in a sampler box of chocolates, I wanted a coconut birthday cake, I would have shredded coconut on my breakfast cereal. We even used coconut water as part of our distillation in Puerto Rico in 1993!

The best (?) thing about this beer was its smoothness. There was NO alcohol bite despite its boozy nose. It was slick & far too easy-drinking for my own good. I stood up, took a little break, checked on my (crock) Pot Roast & returned to my seat for more sips.

The relative sweetness was my next takeaway. I found myself licking my lips after each sip so as to capture a stickiness that seemed to coat my lips each time. I was also experiencing the emergence of toffee & molasses flavors beyond what the Bourbon barrel aging had wrought. At this point, I felt as though I were tasting the base beer, well into the contents of the now-decanted bottle.

Schnee Boot from Heavy Seas Beer
Beer rating: 90 out of 100 with 45 ratings