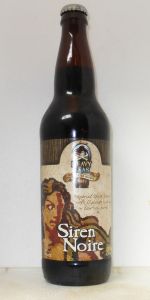 At $8.00 for a bomber, this is the gold standard for BBA Imperial Stouts when it comes to value.

Poured from a bomber into snifter. 2015 version. Not much head, but one forms on the sides and it stays. The aroma is mostly roast, despite the variety of ingredients, but pretty inviting for a stout. Initial taste includes bourbon and vanilla--pretty tasty. As it goes on, the bourbon and vanilla fade a little and the chocolate becomes more prominent. Overall, it's a solid, silky stout. IMO, its shortcoming is a little in the body. It's not weak, but not hearty either.

First time having this beer. Bottled in January, which means it was probably brewed sometime in late November with the 5 week aging period. At $9.99 for a Barrel Aged bomber, you can't go wrong.

A: Dark chocolate. No light gets through. Slight head fades to a nice lacing.

T: Holy crap! Tons of vanilla backed up by a good chocolate, roasted backbone that does not overpower. Slight molasses and raisin towards the end. Bourbon flavor is perfectly subdued. Present, but not overpowering, and lets the vanilla and chocolate come to the forefront without any distractions.

O: Very, very surprised by this beer. I am a fan of Heavy Seas but never have I had a beer from them that has made me go "Wow" after every sip. The short period spent in bourbon barrels seems to have been the perfect stay, as the bourbon does not overpower the base beer but lends a perfect compliment to make this beer very balanced and full of flavor. I am a huge fan of vanilla in my stouts, and this beer does not disappoint. The vanilla beans and bourbon barrels the beer is aged on lends the perfect vanilla nuance to balance the strong chocolate flavor. And at $10 for a bomber, and at 9.5% ABV, its something I could see myself drinking more often than not. Big fan of BBA Stouts, but most of them cost an arm and a leg and are often very high in alcohol that its hard to consume them on an occasional basis. It's almost like drinking a bourbon milkshake. Going to pick up another bottle tomorrow to age.

Great price point for a Bourbon Barrel Stout at $10 a bottle. The chocolate is very pleasant and goes great with chocolate cake. Personally, this is a desert beer for me. Would like the bourbon flavors to come out more, but they are there.

hands down one of the most ambitious and well executed beers i have had from these guys, their stuff in my experience until now has always seemed quite basic, good but maybe dated or something, this one is old school in an exciting way, not overly barrel aged, not heavy on the adjuncts, just a great imperial stout enhanced in the right ways, i thought this was beautiful, and a fun one to share with my dad for the holidays. matte black and dense and heady in the glass, mocha cream on top, pretty beer. surprisingly not sweet when i smell and taste it, balanced is the best way to describe it, there is more bitter and earthy character from the cocoa than sugar, its not desserty at all, even with the light vanilla on it, and the whiskey and oak are respectful of the base beer, not intrusive or dominating, letting it stand on its own before making their contributions. i love how smooth this is, just enough oak on it to soften the edges, but its also not enormously boozy which i like. palate coating but drinkable for the style. sometimes less is more with barrels, and this is proof of that, a short ageing leaves the base beer well enough in tact. creamy feeling, full, with good depth and bitterness from the chocolate, which lingers through the finish. impressive overall, a high point for heavy seas for me, a real treat!

A: Pitch black with a thick brown head that did not fade.

S: A very nice milk chocolate aroma is coming off of the beer with a touch of roasted malt.

T: Now that is a chocolate beer. Tastes like a darker milk chocolate with an alcohol and slight hop bite. Just pure chocolate until the finish when the roasted malt flavors kick in. Also a very, very slight hint of ginger in the aftertaste.

M: Smooth and a little on the thin side. Still pretty good though.

A really nice chocolate stout. Pours a real dark black with a small light brown head. Aroma is sweet chocolate and coffee, with a little vanilla. Its very inviting. Taste is mocha with a little bitter chocolate at the end. A little drier than other Chocolate stouts I've had, but its not unpleasant. Taste like someone mad a Chocolate Guinness, its good. Very easy to drink and alchohol is hidden very well. I would have this again.

This beer pours black. It is topped with an inch of tan head that leaves a little lacing.

I can actually smell the chocolate before I smell the bourbon. It does have a nice aroma. The chocolate and bourbon are making me thirsty.

The flavor follows the smell. Although the bourbon is a little more forward than it was in the smell. The taste is a little harsh but would mellow out nicely with some age.

This is a pretty damn good beer for $7.99 a bomber. I would not call it world class, but I would call it a great value for a chocolate, bourbon barrel imperial stout. It's a nice break from paying $15+ for bombers of ba stouts. It's nice to have more affordable options.

Poured from a 22 oz bomber into an oversize wine glass. The label is different than the one pictured on this site, and so is the abv (9.5) . This is part of the 2013 uncharted series, and if I find an alternate listing I'll move this review to that one. Purchased in Wakefield, RI.

A- pours an opaque black body with a 1" mocha head that reduces quickly and leaves some uniform lacing.

S- I get chocolate covered raisins and coffee beans, with some slight vanilla bourbon in the background. Subtle aroma

T- Huge vanilla notes upfront, progresses into cocoa, dark chocolate, and a nice roasty flavor that stays on the tongue for a bit. The bourbon flavor is minimal, so -.25 for that. slight booze

M- thick and robust, just how I like a good imperial stout. Medium carbonation

I really enjoyed this brew - not much bourbon character, but rating it as an imperial stout it's pretty impressive.

Poured black, completely opaque and with a very thin head that fell immediately to a thin ring. Some lace. Nose is sweet, creamy chocolate. Coffee, roast and toffee malt. There was a brief hint of dark fruits but that disappeared fast. As it warmed there was a little toast, a lot of vanilla, a bit of cola and the alcohol crept in. First sip gave me a strong shot of something more vegetable than fruit, A cooked taste that I really didn’t like. Then the chocolate took over mid palate. It wants to be deeply sweet and creamy but the mouthfeel is thin and a little watery. There’s a lot of vanilla on the palate and a little cola too and the flavors don’t quite come together but remain separate. It’s without depth. There is some roast and some pretty oily bitter in the dry finish. There’s an oaky bourbon like quality and it even has a vinous aspect. The malt is weak and that is this beer’s downfall. It starts with a seductive nose but there’s that vegetal quality and then it’s not really full.

Pours a mild milk chocolate head that soon dissipates to the edges and only with a small ring.

Smell surprised me a little bit. There was more chocolate in the nose than I expected and less black patent malt. This always makes me happy when an imperial stout does not taste like ash or burnt. There was a nutty presence along with a tamed stout aroma.

Taste was similar to how it smelled, a nice nutty imperial stout with milk chocolate, medium roasted malt, not burnt! Slightly light on the mouthfeel and light carbonation. This beer actually surprised me a bit. I had been expecting just another over black patented mess of an imperial stout. A very drinkable and abv hidden Chocolate Imperial stout.

Pours a motor oil black with very little head at all. What little head is laced thickly around the edge of the glass. The aroma is slightly coffee-like, and a lot of malt. The taste is malty and slightly sour. Not too sour, just a hint. Basically this is a substandard imperial stout. Heavy Seas has way better stuff available in pounders than this. Not worth the price of a bomber.