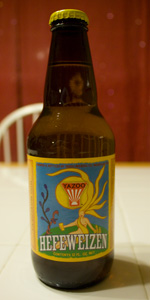 Notes: An authentic example of a Bavarian Hefeweizen. “Hefe” means cloudy or yeasty and “weizen” means wheat. This beer is made with mostly wheat and uses a true Hefeweizen yeast that gives it a fruity, banana aroma with just a hint of cloves. The tart finish makes this the perfect summer beer.

12oz brown bottle with a "bottled on" date.

Vigorous pouring produces a tall order of white head, a stiff swirl of the bottle to get some yeast in as well makes the brew hazy straw in appearance. Soft banana bread and a twang of clove in the nose, yeasty. A bit smooth, a bit slick and a bit crisp in the lighter body. Bready palate, banana taffy, faint clove, nutty yeast and some other vague fruity esters in the back. Semi-dry finish.

Pretty spot on for the style, good drinking ... I'd perfer more smoothness here but now I am splitting hairs.

This beer just recently became available in bottles and this sample was bottled the 3rd week of July. Beer poured a light yellow with a quarter inch white head that quickly evaporated. Yeasty, home brew aroma. Taste started out yeasty then a pleasant clove flavor emerged that was very dry and quenching. Aftertaste was smooth with a rich mouthfeel. Although I am not a huge fan of this style I found this to be quite addictive. Maybe it has to do with the 100+ degrees in Nashville this last week.

Had on tap at Jim'Nick's BBQ in Murfreesboro,TN.Came in a standard pint glass a dull hazed medium golden with a thinner white head atop,knowing it wasn't in the proper glassware kept the score from going lower on the appearance.clove and banana aromas stood out most and they were pretty assertive,light toasted wheat underneath.alighter feel in the mouth but it made the beer go down even easier than many of the style.Banana and yeasy phenol flavors with a refreshing little lemony twang in the finish wich gave it a little complexity.Not a bad beer,not a style i go to very often but Iam sure it beats the TN heat in the summer.

Follow-up 2014: Just picked up a sixer at a Tupelo Kroger. Date bottled 01/22/14. Tasted fresh and the review holds true for the bottled product. The way a Hefe should taste. Wish I bought a whole case now... my hefe-loving wife will love this. Pick up some today.

Yazoo please head west. Arkansas and Oklahoma will support you.

Not my first Yazoo hefe, and certainly not my last, this was the one reliable beer that I could always find during my visit to Nashville. Not that there weren't other solid beers (Tennessee Brew Works Extra Easy comes to mind), but this one just seemed to be everywhere. I grabbed some bottles at Trader Joe's to keep in my hotel room, and I even had a pint at the airport on my way out... all in all, over the period of 5 days that I was there I probably had one pint a day in just as many different places. So, the beer...

It's a little bit on the light side, not quite hitting "medium bodied", but it's still flavorful. They've taken the yeast pretty much full-throttle and it's loaded with banana, clove/bubble gum, wheat, yeast, and lemon. It's everything you'd expect from a Bavarian hefeweizen without all of the body and malt - although there is still malt there, displaying wheat and a yeast influenced "banana bread" character. As might be expected the bitterness level is fairly low, but it still finishes semi-dry. It's a hefeweizen that's a little bit lighter for drinking in the southern heat, and I hate to say it but it's "less filling", refreshing, and really quite drinkable - and that's where it shines.

In a Duvel goblet for this tasting, because it was handy. This is not only my first Yazoo Hefeweizen, and my first yazoo brew, but most probably my first Tennessee beer. So here's to that.Forget about the snakes and naked ladies...
Golden hued, very hazy, I tossed the yeast in and it's swirling around like a liquid snake...smallish head, for the style.
Aroma, citrus, yes, banana, yeah, some spice, a bit of clove...spicy and lively. Nice enough.
Taste: brisk,zesty, citrus-y, spritzy...big carbonation...lightish body...slight finish, though.

A bit weak, lacking in flavor, but not terrible, at all.

Had this on tap at the brewery in the tap room. Pours an orange/yellow color with a tall white head that sticks around. Has a citrus aroma with a grainy character that a hefe should have. The flavor has the citrus along with a slight spice from the yeast. Easy to drink and finishes very crisp.