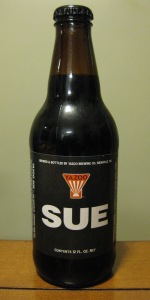 Notes: The south is famous for smoking everything. Why not beer? Sue is a big, rich, smoky malt bomb of a beer, with mellow smokiness coming from barley malts smoked with cherry wood, and assertive bitterness from Galena and Perle hops to cleanse the finish.

Smell: There is some moderate smoke in the aroma with a low level of chocolate. There are hints of dark fruits in the background.

Taste: The smoke is strong in the flavor with some chocolate. There are some bacon like flavors with a hint of burnt in the background. The dark fruits are very low with some low roast.

Feel: It has a medium body with a bitter smoky aftertaste.

Overall, the smooth is the star of the show with the other elements in support.

12oz bottled 07/10/20 ( about a month old) poured into a Spiegelau stout glass at fridge temp 9% ABV 93 IBU per label. The beer pours dense black with mocha brown head. The head recedes slowly to a quarter inch cap and leaves behind a partial lacing. The aroma is smokey up front with dark chocolate and coffee notes coming in behind. The taste is savory & smokey with notes of ham, coffee, very dark chocolate and tobacco before an earthy and fully bitter finish. The mouthfeel is medium plus bodied with average carbonation and a dry finish. Overall, very good smoked beer. Less satisfying as an imperial or smoked porter as the smoke is first, without being totally dominant. I would purchase regularly if this were available locally.

Pours an inky black with some crispy brown edges and a tall khaki-beige head of 2 fingers. Very creamy, and leaves lots of lace on the glass. The beer is just a sight to behold.

Flavor is roasty, full, and heavy. Brings notes of roasted malt, smoke, salt, dark chocolate, cashew, and fig. Has a subtle herbal hop presence that balances things out nicely and builds on the palate. (Word of caution : if you do not like smoked beers, do not buy this one)

Feel is full and roasty, the heavy spiky carbonation makes it feel more like a medium bodied beer though. Has a lot of drying roastiness on the back end with lots of hop resin as well. Moderate heat, moderately warming.

Overall, this drinks like a world champion of 2010-2014 era beers where craft beer was just beginning to take hold in mass markets. Think Founders Breakfast Stout or Anchor Porter. Nowadays we've been so blessed with great beer that this is easily eclipsed by a lot of other great beers from other breweries - but make no mistake this still stands as a mile marker porter. Respectable. (Respect yo' elders!) Would definitely have again, this was enjoyable.

We interrupt this brewery horizontal, already in progress, to bring you this recent find in the Bottle Backlog at Chez Woody! We would not be interrupting this all-important programming were it not for the match-up in styles. We appreciate the kind generosity of our local, in-person benefactor, @tone77 for providing us with this beer. Please stay tuned for all details, brought to you live & in real-time!

From the Bottle (!): "An Imperial Smoked Porter"; "The south is famous for smoking almost everything. Why not a beer? Yahoo Sue is a big, rich, smoky malt bomb of a beer, with mellow smokiness coming from barley malts smoked with cherry wood, and assertive bitterness from Galena and Perle hops to cleanse the finish."; "93 IBUs"; "Silver Medal, 2010 GABF - Smoked Beer"; "'Epic' - Beer Advocate Magazine".

I Pop!ped the cap & started a slow, gentle C-Line pour into the awaiting glass. I watched in rapt fascination as it foamed up to form two-plus fingers of dense, foamy, rocky, deep-brown head with excellent retention, taking forever to fall away. Color was Very Dark Brown to Black/Opaque (SRM = > 34, < 44) with cola highlights at the edges. Nose held a mild smokiness, but it was not as pungent as with the previous Thirsty Dog's Rail Dog. Fair dinkum, as the proof of this pudding will be in the tasting. Mouthfeel was medium, which would be okay for a "Smoked Beer", but this is an "American Imperial Porter".

Now, I was on the horns of a dilemma - Change Request or no? I'm going to submit one since it won a medal in the "Smoked Beer" category, so the brewery clearly thinks of it as such.

Once I had some on my mouth, I swirled it around on & with my tongue to allow it to warm. This one was subtle, slowly blossoming open like a flower! I understood why the GABF judges would have liked this - instead of being a roaring, in-your-face Smoke bomb, like the previous beer, this one had the low & slow kind of flavor that Southern BBQ is known for.

One of the best meals I had in my road trip of 2008 was at the now-closed ( 8=( ) Uncle Billy's Brew & Que in Austin, TX. From my review: "Food: I went with the BBQ Tray, choosing smoked ½ chicken, glazed carrots, and green beans. The meat was so tender as to be falling off of the bone and so smoky as to make me weep. The combos were endless, but this was a good fit."

This beer began to remind me of that meal & I was ready to begin weeping anew, both for their closing & for how good this beer tasted. Mmm. Its subtle smokiness was creeping northward with each sip, filling my mouth & sinuses with its flavor.

This was becoming VERY akin to the more smoky of the three Aecht Schlenkerla rauchbiers! Such is why "Smoke Beers" are a polarizing style - they run the gamut from lightly-smoky to forest fire-smoky & it is definitely NOT for everyone as evidenced by only a select few attending my Smoke 'em If You Got 'em soirees.

Finish was dry with a lingering smokiness that gave me pause. I am going to have to take a break & eat something neutral before my next review. No problem! It was a great way to start my day. YMMV.

On tap at the Nashville airport Yazoo beer kiosk

Taste is toasted malts , not harsh or bitter

Matte black with brown edges and a fuzzy light tan head settling to a thick collar.

It's more on the bready-smoky side than the meaty-smoky side if that makes sense. It's a deep black cocktail of fantastic malty, smoky, and woody flavors. This is one of the best beers to drink with good southern food, and damn good on it's own as well. Not an every day beer, but a great weekend or special occasion beer.

Pouring out a sturdier brown than just about anything from the South that isn't a Cigar City beer. Although that Lazy Magnolia brown was respectable too. Anyways, 1/3" lighter brown head on top of an assertive browner base.

Taste is surprisingly good, its got plenty of base malt, but the smoked malt is really in the proportion I like, not a giant rauchbier style, but not insignificant too, and with a variety of smoked malt and cherrywood and whatnot, you get a relatively complex but not muddled malty beer. The non conventional hop usage works to give a relatively generic bitterness to it that doesn't clash with the smoked malts, but further enhances the beer with a moderate bitter backbone. Carbonation done right.

This stands out as a phenomenal pairing with campfire and meat. While there is a little bit of sticker shock price wise with a non proprietary hopped beer topping $15/6 pack, I have to say its worth it. I could easily see multiple purchases of this, especially if I know I'm gonna do some camping or drinking around a fire.

Not bad at all just not perfect. Slight smokey flavor a little bite to it.

Imperial smoked Porter. Excellent! I'm usually just a DIPA / Imperial Stout / Tripel drinker. Now there's a 9% Porter that tastes excellent. Why don't they sell this in Texas? Grabbed a 6 pack in Tennessee since it was local and was shocked it tasted so good. $16 for 6 but I'd say it's worth it. Try it if you can find it (and you like Porters)

A HUGE body with a warmth that lingers long after the final drop. Makes me sleepy in the same way that a fireplace does. It’s too bad Tennessee’s winters are mild because this goes wonderfully with snowy evenings.

Also, I’m not big on beer/food pairings but this one absolutely must be paired with smoked meats.

Poured from a brown 12 oz. bottle. Has a black color with a 1/2 inch head. Smell is of smoke, roasted malts. Taste is of a campfire, smoked meats, some alcohol is present. Feels full bodied in the mouth and overall is a solid beer, but I was expecting a bit more.

I'm trying this at the brewery. It poured an opaque dark with thin white head that is not leaving much lace. The scent had smoke and roast presence. The taste was smoke base with roast/coffee accents. The mouthfeel was medium in body with good carbonation. Overall it is a good beer.

Enjoying in draft. This beer is a pitch black brew with one finger worth of medium tan colored crown. Crown has great retention. The smell is some balanced smoke mixed with some oak notes and slight hop presence. The taste isn't too much on the smoke and more of just balanced roasty malts. Definitely wish there was more smoke in there for something that is a smoked beer. The mouthfeel and body is a little too light and thin as well on a beer this dark for me as well. Overall, I really like the balance of this drink but do wish for more smoke when grabbing this as an option.

12oz bottle. Served in a snifter glass. Pours a dark black body, one finger offwhite head, short retention, plenty of lacing. Smell is the slightest smoke, roasted malt, milk chocolate, a slight bit of lactose, light espresso. Flavour follows- milk chocolate, more smoke than the nose suggests, a bit of earth, light espresso. Balanced. Not ashy or overly smoky. Mouthfeel is medium bodied, good carbonation, smooth and creamy, light earthy smoke on the finish. Very solid beer for sure, with the smoke adding a bit of nuance and character but not overwhelming it.