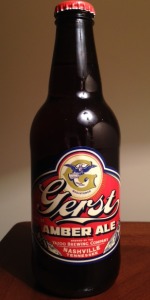 I had tried it several time at the Gerst Haus in Evansville. Finally decided to buy a keg for home. Malty, smooth with no after taste. Great amber head, with a dark brown body. Keg will remain fresh for a lot longer than other beer I have had.

Bought a sixer from Total Wine in the ATL burbs. Was excited to try a new "amber ale," but apparently this conforms more to the Altbier style. This was disappointing from the outset, with a very meager head and faint malty aroma. Taste? Reminds me of a less hoppy Sam Adams lager. Goes ok with food, and and definitely not terrible, but I would not buy again.

From a 12oz bottle. Pours a clear amber color with two fingers of fluffy cream head. Roasted malt and herbal hop smell. Medium feel. Lightly roasted malt with a hint of noble hops. A good example of the style.

12oz draft served cold at Gerst Haus Evansville in a shaker pint 4.5% ABV per menu. The beer pours brilliantly bright dark amber with khaki head. The aroma is mild with toasted malt and stone fruit. The taste is semisweet caramel with a heavy dose of adjunct (likely corn). The finish has only a touch of bitterness and has a noticeable oily/soapy aftertaste. Mouthfeel is thin to medium bodied, adequately carbonated and undry in the finish. Overall, ok. This is only a altbeer in the sense that it would have been a traditional Americanized version many years ago. Ok with food, but nothing to seek out.

With a light amber color, it has flavors of light dried fruit and stale caramel, with a faint aroma of the two. The carbonation is crisp with an aftertaste of malty apple juice. In terms of pre-prohibition ales, this is a good option. Another good Pro-prohibition beer to try is the Hopski from Acoustic Ales Brewing in San Diego. Make sure to get it on draft, as it tastes much better than the bottle.

On tap. Clear amber color with just a hint of a head.
Aroma of caramel and bread.
Ditto on the taste. Caramel and bread. Big malt presence, little or no hops.
Medium-bodied. Very sweet.

poured from a 12 oz bottle two finger head lasting a short time. taste mostly a sweet bread and nutty combo of malts with a mimimal hopps presence is substancially better on draft..

I'm trying this at Buffalo Wings and Rings in Franklin, TN. It poured a clear amber with thin white head that is leaving a spotty lace. The scent was non descript. The taste was nicely balanced and easy to drink like a common amber ale. The mouthfeel is lighter in body with good carbonation. Overall it's not too shabby.

Little hard to tell what this was like fresh. Tastes a little oxidized at this point. Amber in color, good clarity, nice white head. Good carbonation. Nice malt aroma of bread and caramel. Toffee and caramel flavor. On the malty side with very little bitterness. No hop aroma or flavor. Well made just not anything spectacular.

This beer was honestly pretty boring. Nothing to write home about. Not bad flavor but just tasted like nothing special. Probably won't want to buy it again.

Not a lot going on with this one to me , its a easy drinker but honestly I'd rather just have a cheap macro if I want an easy drinker..

Local brew and I love yazoo but this one is just not my style.

A solid, enjoyable brew. Not my favorite by any means, but I do love the history of this beer.

It is very crisp, clean, and lets the malts speak for themselves.

Amber; head dissipated quickly. "Old school beer" from the aroma right through to the taste. Has a great mouth feel with nice malt flavors. Easy drinking.

Got this in a trade. Poured from a 12pz bottle into a pint glass. Nice light amber color with two fingers of head which dissipated quickly. Has an "old school" beer aroma which follows through to the taste. Has a great mouth feel (stop-don't go there). Nice malt flavors with a bit of Euro water taste. I could have easily stolen this from my fathers beer fridge a couple decades ago. All day drinker.

From the bottle, it pours a darkish amber with a small head, quickly reducing to a ring. A bit of malt in the nose. The same goes for the mouth - malt in the mouth, with a slight touch of bitterness - as an amber should.

Nice amber color with a good malty smell to it. the first taste is of malts then a bit of bitterness, but not too much. A very smooth taste that a nice surprise. I would say a very nice not to fancy beer for your enjoyment.

Overall: An Amber Ale worthy of the name in color, flavor, texture and taste. No, I'm not saying flavor and taste can't be the same thing, rather here we have several flavor threads creating a fairly complex taste. I don't know why the same brewery makes Dos Perros and Gerst as both have a similar appeal and this one is clearly the winner of the two.

A really solid amber ale that I enjoyed much more than I expected to. No real complexity to speak of, as the palate and aroma were pretty straightforward, but the balance of hops and malt was really on-point.

Dark copper in color with a lightly cloudy complexion. There's a fingernail of brilliant white resting on top. Aroma is of bready to coppery malt. I taste plenty of sourdough malt. The mouth is very smooth, crisp, and refreshing.

L- Poured semi-aggressively from a 12oz bottle into a large perfect pint glass. One finger of head quickly dissipated leaving only a small layer on top of the slightly opaque amber brew. Very pleasing color, but left little to no lacing as I enjoyed.

N- Slight nutty aroma. Not an extremely powerful scent, but that is possibly operator error given that I smoke cigarettes. (they pair very well with any style of beer)

T- Slightly sweet and nutty initially. Then a bitter/sour flavor presents itself after a few seconds. Not the worst tasting beer I've ever had and not the best, **BUT** I personally enjoy stouts and porters so take that into consideration.

F- Crisp and vivid mouthfeel. Medium bodied. In my opinion, the best part of this beer. (Other than the alcohol of course)

O- I was born and raised in Tennessee and Yazoo first caught my attention with Dos Perros, which I loved. Time after time, people told me to try Gerst, so I finally grabbed one in a pick 6. It may have possibly been over-hyped for me, but I think Yazoo has better beers. However, several of my friends disagree. If you get the chance, grab one and see what you think, because whether you like the beer or not, you're still drinking a beer. Cheers!

A really easy-going beer and one of my early favorites, the Gerst would probably be my earliest recommendation for someone in Nashville looking to begin drinking beer for the first time. I would say it's responsible for keeping me interested in beer when I first started. It feels rich but smooth. It has a real classic look to it and the malty taste is really quite great. I would file it under the "dessert beers" category.

Aroma is sweet, nutty, with light fruity specialty malt character and a touch of floral hops.

Flavor is a little buttery. The fruity specialty malt and light citrus hop character become nutty and malty in the finish.

Poured from a bottle into a shaker pint, the beer is a bright, slightly hazy, amber copper coloring, with a halo of white head. Aromas of roasted caramel, subtle hops bitterness, toasted vanilla, and a cracker backbone. Flavors are sweet and smooth forward, with a blend of caramel and nutty sweetness, a cracker backbone, and subtle cream notes. Smooth, light bodied, with a crisp undertone. Sugary sweet aftertaste into a smooth, crisp finish.

New to craft beers, so take this with a grain of salt. Im still trying to find something I like, and this beer is really tasty. Im not into hoppy beers...yet. I also cannot give you every detail and tasting note like many online, but this beer is not too watery, not too hoppy, not too malty. Just really good and drinkable. Could drink this year-round. If you are new to beers, give it a try!

Basic amber ale brewed for the Gerst Haus restaurants. The retro label is probably the most impressive thing about it as it's quite basic; yet surprisingly found all over town on draft! I guess it fits that Yuengling type of niche, a beer that's got just a little bit more than your average American adjunct lager. Not necessarily worth trying.

Notes: Clear copper body beneath a white head. Average head retention and lacing. Limited aroma. Golden caramel and lightly honeyish malt dominates, backed by leafy and lightly herbal hops with yeasty mineral and light fruit components. Better than an average amber but not by much.

Gerst Amber from Yazoo Brewing Company
Beer rating: 80 out of 100 with 302 ratings