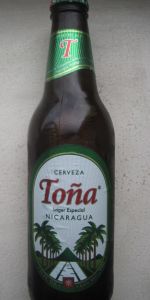 Pale gold in color with a fingernail of eggshell white around the rim and half of top. The aroma is of corn and grassy hops. I’m tasting corn. The mouth is thin and watery.

Poured from a bottle into a pint glass
Appearance – The beer pours a clear golden color with a one finger head of fizzy white foam. The head has a moderate level of retention, slowly fading over time to leave a tiny bit of foamy lace on the sides of the glass.
Smell – The aroma of the brew is massive of a skunky smell (even though it was in a brown bottle) with a bit of a herbal smell mixed within. Along with these over-powering aromas comes a touch of cracker malt and grain.
Taste – The taste begins with a rather crisp cracker flavor that is mixed with a touch of a caramel malt and a little bit of an herbal hop. These tastes take the flavor profile to its end where the caramel dwindles a little bit and the rest of the flavors are joined by a little bit of a grass flavor to leave one with a rather crisp and refreshing taste to linger on the tongue.
Mouthfeel – The body of the brew is quite light and crisp with a carbonation level that is rather average. For the crisp nature and the lighter flavor profile the feel is great and makes for a nice easy sipper.
Overall – Nothing super special, but very easy drinking. A good session style brew for a nice summer day!

Look: Pours a very pale shade of yellow with an off white head of dense foam.

Aroma: More malty on the nose than the color lets on. Malt/toffee notes with a grassy, dry, slightly pilsner like hop profile.

Overall: Not bad, but still an adjunct lager.

12oz twist off bottle stamped 062020 poured into a pint glass at fridge temp 4.6% ABV. The beer pours bright straw yellow with nearly white head. The head fizzles away to a pencil thin ring and leaves an island of tiny bubbles. The aroma is faint malt and corn. The taste is barely sweet with a hint of pils malt plus corn. There's a tiny tart component but no glaring off flavors or flaws. The mouthfeel is thin bodied with above average carbonation and a mostly dry finish. Overall, good. Very nice AAL. Very clean. Would drink again in the right setting.

Decanted from a 12 oz (355 ml) bottle into a custom taster pint; best by June 08, 2019.
A: Pours a crystal clear, straw to golden color with a one finger, foamy white head, decent retention, and spotty lacing.
S: Pungent briefly with cocoa giving way to grainy, grassy, and even bready aromas.
T: Very dry. Picked up the cocoa initially with very lightly maltiness and lightly peppery bitterness.
M: Light bodied with low carbonation. Drinks smoothly, crisply, and fairly cleanly.
O: This is a solidly constructed lager. Certainly in the ball park with the other macros, as the scores reflect.

Tona is not the mother of all lagers; but not a bastard either.
Looks pretty good with the sun low and me sitting next to the pool. Smell and Taste are not so good, in fact very average for the style. (I don't mind rice and other adjuncts as they have distinct flavors... just not as good as wheat or malt.) Feel is unmistakably thin.

My first (and only) from Industrial Cervecera, so I went on their website. But because I couldn't find the English button for translation, it took me longer to figure out their story. And it is OK to Good: nice history of a century long, attempting sustainable production processes and gives back to the community. How much they do all that is obscured by the language barrier. But they seem to be in the middle of the industry's trends. Good enough for Tona.

Poured from 1 liter bottle at Via Via, Leon, Nicaragua. Possibly underrated because of freshness issues? In my opinion it is a great representation of the style and beats most macro lagers from the United States and also tops many craft lagers as well.

Poured from A 12 OZ bottle into a pint glass. the appearance is a clear light yellow. kind of like discolored water with a small white head. The taste is metallic and unlpeasant.

Notes via stream of consciousness: It's surprisingly clear offering fingerprint-through-the glass clarity in its pale golden body. It's interesting, it's got a little bit of a brass sheen to it, and not too many bubbles can be seen rising up towards its creamy bright white head. The aroma is grainy with a very light, generic hop presence in the background. The flavor follows the aroma with a lightly grainy maltiness that makes me believe there's a good deal of adjunct in play, there'd be more grainy maltiness to it if there weren't. The hops are still limited but lend it a touch of lemon and grass. Bitterness? Hmmm, hard to say, I'd guess around 20 IBUs. It's balanced and it finishes dry and spicy. Hmmm, there's also a touch of yeasty fruitiness, mainly apple, that's nice. Looking back the head has dissipated and there's just a collar left, and there's not much lacing left behind. In the mouth it's light-medium in body but leaning towards the lighter side of things, and although it didn't display much in the way of carbonation it's actually got a nice crispness to it. It pleasantly tingles the tongue. That might be its best attribute. So, overall, what to think of this beer? Well it's one of those beers that sets the guidelines for every other beer in terms of the 1 to 5 scale. It's a little bit above average on a global scale, earning a 3.25 overall mainly due to its clarity and fine-bubbled carbonation. It's a take it or leave it beer for sure but there are no technical flaws and I'm sure it would suffice if you were traveling in Nicaragua and wanted to have one with your steak and chimichurri or nacatamale.

compared to macro lagers from other developing countries, i think this is way ahead of the curve. its crisp and easy drinking without hardly any of the adjunct and metallic flavors so many of them have, and just as good, its not watery at all, in fact bringing quite a bit more body to the table than most of these do, without sacrificing capacity for refreshment, it just feels more like a beer, and i dug it with some quality mexican food last night! golden colored in the glass without much head, but the flavor is good. lots of pale malt in here, i dont get the corny sweetness that is common in these, and i can actually taste the lager yeast a little bit, despite the beer being refined and cleaned up to a pretty high degree. good carbonation on it, more than i would have guessed from the appearance, and a light bitterness at the end. its not much different from a lot of others overall, but it seems an improvement in several subtle ways for me, and this is one i would be happy to drink again, especially in the mexican/latin american food context. pretty sure this was my first beer from nicaragua too!

Tastes malt and grain, grassy hints and a touch of spice finish is dry with a malty linger. Light body and fizzy medium carbonation.

I decided to give this beer another try after a previous sub-par tasting and I am very, very glad I did.

Somehow Toña has become one of the tastiest adjunct lagers I've ever tasted.

A nice balance of toasty malt and hops. Dry start and sweeter finish.

Of all the beers I try, there is always going to be times where you shoot craps. This is one. THis review is short, don't bother with this one. Next, please!

Look: It porus light golden with a head that quickly disappears.

Smell: It has grainy sweet aromas with some musty elements, and grass.

Taste: It is somewhat grainy sweet with grass, and a bit of musty to it.

Feel: It has a light body with high carbonation that leads to a carbonic bite.

Overall, this is a beer that doesn't have much complexity or flavor, but what is does have is okay.

Poured at 43°F from a 12oz bottle (bottled on 09Sep16) into a Pilsner glass. Consumed on 23Sep16.
SMELL: This legitimately does not have a smell to it.
3 out of 5
TASTE: An instant balance surprises me as mild flavors of biscuits and spicy hops first roll out on to the palate. Subtle earthy hop flavors and hints of peaches and floral hops quickly trail as the biscuit and spicy hop flavors dwindle to faint levels. The subtlety of the brew closes with flavors of bitter hops and hints of grass and car exhaust while all previous flavors now maintain.
2.75 out of 5
NOTE: I was expecting something dreadful, but instead, I received a simply bad beer. I would not recommend to any craft beer lover unless you just want to scratch a Nicaraguan beer of your list. I would, however, give this to my macro loving friends as this is a much better alternative to a Budweiser or Coors.

So, I don't think that I've ever had a beer from Nicaragua. The brew that I have has a different label, but it is clearly the same product. The appearance is a pale yellow, clear, effervescent, with a (frankly) better than expected head. The aroma is of adjuncts...corn, a bit of dms, but also (surprisingly) a hint of malt. The taste is light, slightly sweet, and bland. Light in body and watery finish. Honestly, it is better than I would have expected.

O- Nothing good about this. Light, tasteless, and chuggable.

S: diacetyl; a little light struck; a hint of bread and pilsner malt;

T: a balance between bread, pilsner malt, and skunkiness; finish is mildly bitter;

O: date on the bottle is 6/3/16, so it's probably reasonably fresh; only takes a few minutes in the wrong light to get light struck;

Pours clear, straw yellow, with moderate carbonation. Taste is straw, honey, and light cracker. Tasty and refreshing, slightly above average adjunct lager. Nothing fancy, but just what I needed tonight.

Thin & light. Exactly what was expected when ordered. On its own, Tona is far from impressive. When you're getting lit up by habaneros and llajwa on your steak. It plays its part well in keeping the fire at bay. If I see it on the list at future latin joints, sure. But this isn't going on the dolly the next time I'm at the distributor.

I didn't feel like this one was as bad as most people make it. Sure it's not top quality but when enjoyed in hot weather and with the right kind of food it's actually really good. Decent flavor and aroma and a nice head to appease the eyes. Not bad at all in my opinion.