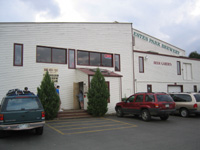 Atmosphere - you enter on the lower level, which holds a gift shop with a ton of t shirt racks; at the back is a bar offering up to four free 2oz samples! On the same level the brewery and bottling area can be seen. Upstairs is the restaurant and bar. Plenty of seating inside and some on the outdoor patio. A game and pool area as well, which is a good touch for those of us with kids!
Quality - I have had many of their beers before, but sampled the stout and the porter because I was planning on having a pint of one of the two with lunch. The porter is the weakest of the beers I had, the stout was very good; I also sampled the pumpkin, which was decent. I ultimately had a pint of the wet hop pale ale, which is a seasonal; this was the best of EPB's offerings for me, definitely more of an IPA than an APA! I also purchased a 6 pack of the Renegade IPA on my way out!
Service - I've been in on a weekend before and it has been busy, but not crowded and the service has been good; nothing really to complain about really.
Selection - usually about 10 of there beers on tap, with about 7 year rounds and 2-3 seasonals.
Food - typical pub fare; nothing on the menu really stands out. Good value for a family of four for lunch.
Overall - fun place to go for lunch and a few beers if you're in Estes Park with the family!

I've never seen a brewery that seemed so disinterested in selling their beer. The pricing is insane, 4 free samples at the tasting bar that wasn't staffed means no free samples. Samples in the bar room, $2, what? The sample bar is near the kitchen, which, despite being staffed didnt ask if we wanted samples. The bar was aggressive is getting me a beer, hadnt even seen a list yet, slow down. My first beer order wasnt available despite the tap handle being on the faucet. Had a so so pint. Tried the tasting bar again, still no help there. Just a terribly operated business making just average beer.

Went with a group of colleagues. The place was practically deserted. The beer is good and the food not bad. The service was very good. Their Gold blonde had a good taste as did their Renegade IPA.

The bartender was nice and friendly. He gave us some tips since we are visiting from out of town. The decor is hideous, and I question the overall cleanliness of the floors, tables, tap lines and kitchen. It is very outdated, with neon lights, arcade games and murals. It looks more like a truck stop. I wouldn't go back.

The beer was good, as was the free samples at the bar downstairs, but after a long day of hiking up in RMNP, I was hoping for some good food to go with the beer... your options were some sort of fried this, deep fried that, fried this, or fried that. They did have what they called a s'mores which was part chocolate stout and part ale, that was really good though. It seems like the building's been around forever as have the furniture, which if you're into the hasn't been updated since the 70s-80s feel and look, then you won't be disappointed.

Copied from my Trip Advisor review.

This place seems to have a ramshackle vibe, like it was thrown together hoping it would work. The tap room staff seemed like they weren't very into their job. And I've never seen a growler get filled from a pitcher before. The beer tasted good.

You have to like a place that offers four free beer tastings when you enter into their building. After sampling four of their eight beers on taps (and deciding I would have their Lager for dinner) we moved up to the restaurant on the 2nd floor for dinner. The service was good, as was the food and the beer. The only thing I marked them down on was the vibe since there wasn't much going on - two different MLB games were on their their TV screens and that was about it. I would recommend it if you are stopping over in Estes Park for the night.

The vibe was like a sketchy run down arcade. I didn't have a single beer which I would consider purchasing for even a second. The gentlemen who helped us with the tasting said almost nothing and never smiled. I guess there were a variety of beers you could try though none of them were good. I would never come back here.

The vibe is very chill and has a woodsy feel to it. It's very laid back.