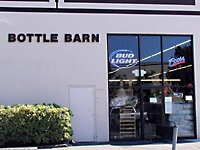 View: Place Reviews
Reviews: 57 | Ratings: 79 | Log in to view all ratings and sort
Reviews by TheLongBeachBum:

After a trip to Bear Republic, and an event laden drive back to Santa Rosa, a stop at Bottle Barn was easily accomplished. Just off the 101-N, taking the Mendocino Avenue exit and a few twists and turns will have you at the Bottle Barn, located in one of those small every unit looks the same Industrial areas about 4 miles north of downtown Santa Rosa itself.

A glowing neon Bud Light sign to the right of the official but staid Bottle Barn signage didnt seem to bode well. The interior is an open warehouse, nothing fancy, just rows of shelving and stacked boxes all over. Predominantly biased towards the Wine buyer, and why not this is Sonoma County after all, it does however have a nice selection of beer.

A short walk forward once inside soon has you facing a handful of coolers which are filled with 22 ounce Bombers from a nice variety of craft brewers. I picked up the last 2 Bomber bottles of Moylans Hopsickle (this is the first time I have ever seen this!), a Deschutes Hop Trip, Island Starry Night Stout 2004 and a never before seen bottle of Anchor Bock.

A nice selection of 22ounce Bombers, both in and out of the coolers, lots of 12 ounces in 6-Packs, it looked like they didnt sell the 12s as singles. Heavy on Cali brews, has more Marin and Moylans bottles than the BrewPubs themselves. Bear Republic Tribute Brown and XP Pale Ale both drew my attention as I rarely see that in SoCal. A varied range to Euro brews including some classic Belgians and a rarer seen bunch of weirdo Russian brews. Only concern regarding quality of beers on offer was the fact that they still had Bombers from Ross Valley on sale, as it appears that they closed some time ago.

Prices seemed fare and reasonable. I never asked for any service and I wasnt refused any, I picked up my own brews and took them to the desk, I have nothing bad to say about the chap who checked-out my beer, he offered a Box without asking and seemed like he knew what he was doing. Hard to mark service on occasions like that so Ill go with a 3.5, seems fair enough.

Thanks to BA Rapapoda for directions here, putting up with the blow-out on the way and covering my back on the 101 whilst I did the spare wheel change!

Make time to do the short 4 mile trek here if youre staying in the centre of Santa Rosa.

Stopped in after a visit to Cooperage. Wide open warehouse style, bottles available in both cold case and on shelf. For imports, i didn't notice too much out of the ordinary, the usual German, Belgian and Brit beers. Heavy on the locals for most of the craft beers, but they did have Jackie O's but only sours (boo!) Pliny bottles a plus. Found plenty to keep my interest, decently priced.

Bottle Barn is a huge liquor store with tons of hard alcohol, wine and beer. There's a pretty good selection of singles, most of which are stored at room temp but some are refrigerated. There's also a huge selection of sixers. Plenty of interesting imports and a ton of local beers, which in Santa Rosa means there's some pretty good stuff on offer.

So, the selection is really good, but it is not specifically a beer-centric place. That said, it's definitely worth a stop if you're passing through the area and want to pick up some interesting bottles.

This place is sort of a sleeper. Kind of funky and not well lit on the inside with tons of booze and wines but with a very good beer selection, including several cold boxes and then lots and lots of shelves. This is definitely worth a stop before Russian River opens or after you're done. (There are also two other small breweries across the street - weren't open when we were there so can't comment on the breweries). Bottle Barn is well worth even the extra effort.

Just your average, run-of-the-mill, mind blowing bottle shop. There’s wine and spirits but I come here for the beer. The good stuff goes fast, and it’s all fairly reasonably priced, with a massive selection.

As some reviewers have noted there are some great beers at this place but also gaping holes in their selection (I found more Victory and Abita than RR, lol). Fairly large, warehouse like environment.

Not sure how to judge the "vibe" of this place, but the most important thing is that it has great beer and a helpful staff. Its pretty close to Russian River and they usually have Pliny bottles and a boat load of other great beers.

I'd definitely recommend checking this place out if you are in Santa Rosa (or near it).