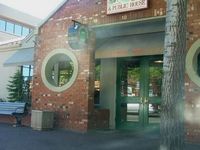 Terrible. Noisy crowded alcoholic crowd. Ugly waiters and people with tattoos and piercings-ugh.
Yuck. Bathrooms filthy and male restroom had semen from gay sex all over the walls.

A moderately long, old-school wooden bar sits adjacent to an Applebee's-like restaurant space. However, the interior is apparently much larger than it looks from the outside, and it seems like there were more tap stations in the place than the two long ones that I saw, as a rack of clean glasses from our bar were being brought elsewhere. Either way, there are tons of beers on tap, far more than the two of us could try in one evening.

The classics that you can find countrywide are obviously available, and it's nice to try them fresher than you may be used to, but the unique on-site only offerings are obviously where it's at. Not only did they have some rarer stuff you don't normally see, like a few years of Dissident, but it was fresh hop season and there were a couple of beers available in that respect, and they were not all IPAs either. Everything was good, to better than good, but nothing was out of the realm of expectation.

Food is also leaning in a family restaurant direction, but does feature some nice, creative and/or healthy options. The white bean chili soup and hummus with artichoke and large, softened carrots were certainly worthwhile, and the pita either seemed authentic or was definitely well-sourced. The menu is pretty large with plenty of options either way.