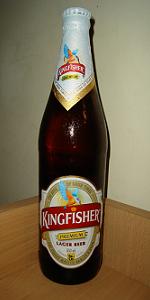 Appearance  Clear light yellow in color with a white head that foamed up big and laced well.

Smell  Grainy skunk hides the hint of hops in this nose.

Taste  The skunk is complimented by sour fizz, making it difficult to drink AND to smell.

Sinkability  Yes, this is going down the drain.

I find myself drinking this a lot when I eat Indian. Some small part of me tells me that I should stick with an Indian beer.

Quite sweet nose, a hint of bitter alkali, and a washed out smell of seltzer water. A little hop note, but not much.

Weak flavour, nonetheless with a clear bitterness somewhere in the mid-palate. Ends with a metallic twang. Mouthfeel rathr smooth, not too prickly.

Good to drink with a curry, but it just doesn't stand up to the test on its own.

Poured from a green bottle into a weizen glass. Has a golden color with small head. There is a very light grainy aroma. Taste is crisp and refreshing. Slighty sweet with a mild aftertaste. Feels somewhat watery in the mouth. This beer is very drinkable and a good overall selection

Taste: Some grain and biscuit along with a slight herbal note. Tastes like a clean pale lager.

Overall: This isn't a beer to be fussed over. It's a beer for when you want something that pairs well with spicy, down-and-dirty curry. Certainly gets the job done.

Vigorous pour yields only the thinnest, whispiest of heads. Seetles quick into a thin latyer of white bubbles atop a deep golden brew. Minimal lacing and little carbonation.

Brew has the telltale skunkiness in the aroma of many lagers...is it possible to get away from that? Lemongrass notes and sharp hops underlie this.

Ber is almost sweet when it initially hits the tongue, giving way to a crispness and hoppy bite mid-swallow, finishing in a sharp aftertaste and semi-sweet finish.

Not the best of lagers. I won't return for a second glass of this. Perhaps the trip from NY to AZ was too much and it would be better closer to the brewery?

Very clean and grainy taste. Grass, rice, barley and corn flavors mostly with a slight hop snap on the finish. A rather neutral tasting beer that would probably work well with a variety of different foods.

I had one with dinner at an Indian restaurant. Why not? It's got to be better than Taj Mahal, which I've had a couple of times and really don't like.

It pours a pale, ghostly yellow, with nearly no head. No lacing, naturally. Looks very fizzy. As a wise man once said, I've got a bad feeling about this...

I took a sniff. I pick up a little green apple, maybe a little corn, but it's all overwhelmed by a very unpleasant metallic essence. It's like greasy tinfoil that's been in the oven too long. The taste is slightly better, but not much. To me, it basically tastes like a BMC with a little spicy sweet Belgian yeast thrown in, which doesn't match anything at all.

The mouthfeel is very light and fizzy. Not my favorite, but I suppose that's how the style's supposed to be. As for drinkability...it washed down my goat masala, but next time, I'll probably just stick with Sam Adams, which the restaurant also had.

The nose struck me as slightly skunky and corn-dominated at first, but after a few deep breaths I began to appreciate some roasted characteristics and even a slightly fruity aroma.

The taste of this beer is sweet, sweet, sweet. The side of the can lists water, malted barley, sugar and rice/maize/corn syrup as its first four ingredients. This should give some indication of just how sweet this brew is. To me, it tastes like corn syrup with a bit of malted barley mixed in for good measure. Hoppy bitterness is only appreciable after a dozen or so small sips. The beer is far too thin on the palate; and sweet, far too sweet: sort of gross, really.

Considering my overall aversion to the sweetness, I was surprised to find a couple of sips somewhat enjoyable. Perhaps it was the freshness of the can: I drank it on 12 November and the can was "manufactured" on 07 November. Or maybe the seasoned puffed rice that I snacked on as I sipped cut some of the sweetness.

Refreshing everyday beer.
I usually have 1 everytime i go to indian dinner.

Appearance: Pours a clear pale golden color with a rocky white head that fades pretty quickly, leaving the occasional dot of foam on the side of the pint glass

Smell: I avoided the skunk, fortunately, and pick up a herbacious and grainy aroma

Taste: Bready, up front, with a balanced herbacious, grainy bitterness blending with the malt as I swirl the liquid around my mouth; after the swallow, the bitter hop flavor hangs around well after the swallow, but the grainy aspect is not particularly welcome

Drinkability: OK to quaff, but not something to sit back and contemplate; probably pairs well with Indian food

Smell: No aroma to speak of; it smells of beer.

Drinkanility: A tasty brew when served at the correct temperature. I was served this beer at an Indian restaurant in a forzen glass. Plus, the bottle was wicked cold. My first sips were insipid; however, as the sample warmed, I discovered wonderful flavors.

From bottle, Pours clear golden with a white head that leaves no lacing. Aroma and flavour are grains, malt, and grass, with a slightly dry finish.its ok.

I had this at The Garden Indian restaurant in Agawam, MA. The bottle said it was brewed in Saratoga Springs, NY under the supervision from the brewery in Bangalore, India. It was served in a 22oz green bomber that poured a dark golden yellow color. The fluffy white head left a mild lace in the pint. There were smells of pale malt with a mild hint of faint citrus hops in the back ground. It certainly had a decent aroma.

This beer tasted rather light with tones of malt up front. There were some faint hints of caramel and some sweetness in the flavor. The malt was followed up by a slight hint of dry hop flavor in the after taste. It seemed to be very balanced and medium bodied. Decent offering that went down easy. Tasted good with the buffet of Indian food we ate. This brew certainly provided a good mouth feel and a decent flavor. It is very drinkable and would be a decent beer to try again. Not the worst American Macro I have had before. It certainly captures the style.

My fiance picked this up for me before I came back from training.

Drinkability- ok for a lager, I might possibly drink it again. Possibly a good summer beer because it is light and if it was cold definitely good summer working beer.

Pours a very pale straw color with a nice tight head that fades away pretty quickly. Has a slight flowery/yeasty aroma. There's some hop flavor in it, overriding the very weak malt flavor, finishing with a lingering bitterness. Actually, quite refreshing. Especially with indian food (chicken korma + masala rice). Mouthfeel is a bit thin and watery. Overall, it's pretty drinkable, not a bad brew at all.