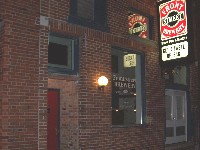 Just a block from the "mighty Mississippi" with decent views from the front windows....but kinda drab, stuffy and dated in the main room and the outdoor seating areas are all in the side and rear of the place...dissappointing feel to this place...not likely I would ever return just based on the "throw back" vibe and middle of the road (also with a dated feeling) brews....good place to take grandma and pa to...

Nice location by the Mississippi waterfront. Nice enough atmosphere for most part but the selection of beers was limited. The food and service we good though.

Update: we were back in October, the horrid operating room sterile black and white decor has been changed for the better, the blackened steak salad was really awesome but the beer still non nondescript and mediocre.

Go for the food and hope you can get a good bottle of suds from an established brewery.

We have been frequenting Front Street since 1998, the food has steadily improved but unfortunately I can't say the same for the beer. Raging River Ale used to be a awesomely hopped traditional IPA, the hop profile was the "three Cs",and an excellent crystal malt profile. Demand usually exceeded supply and on a number of occasions and there were times that 'Rage would only have a few days to age before being tapped, even still it was excellent. Unfortunately it seems that profitability (?) has gotten into the picture as Rage, my all time favorite beer is a washed-out resemblance of what it used to be...it's simply weak.

The Bucktown Stout has been pretty decent over the years and the rest of Front Streets beer offerings fade into background noise.

The IPA I believe is 'Rage with the addition of Simcoe hops, pretty much again so much background noise.

The new black and white color scheme is positively hideous: the white vinyl floors and black painted booths/woodwork give the once warm historic building a cold and sterile feel.

The service has been consistently good over the years, at least for us. The waitstaff has generally been on their game and the bartenders friendly and conversant.

I hope the owners get back to what Front Street used to be, until then there is Blue Cat and Bent River.

I love this place. Perfect medium to low lighting with old brick walls and the trim gives off a cool but not overly hip "classic" vibe. The owners hire good staff and keep the quality of menu high. The beers are excellent, and you can only get them at the pub or the tap room (you can pay for a growler to go). Their beers are so good. They make me happy. The vanilla porter and raging river pale ale are regularly on tap and excellent. But usually even better are the brewmasters special pale ale that change about every month.

Packed when we went. They had run out of a few of their usual beers but food was good.

First impression of this place, coming in from I74 then heading south made it hard (at first) to find parking. Once we figured that out, we found our way into the brewpub. Once entering, you could see that it was a popular place as the place was hopping. We scoped out a couple leaving and jumped into their booth and patiently waited as a server cleared and cleaned the table. If memory serves me correctly, there were 8 or 8 brews on tap to try with my favorites of the sampler being the stout, the english pale ale, and the vanilla porter. The food was excellent; three of us four ordered the reubons and all agreed they were very tasty. I will definitely come back here next time I'm back in the area.