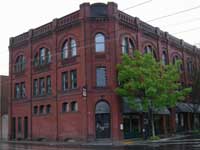 View: Place Reviews
Reviews: 24 | Ratings: 47 | Log in to view all ratings and sort
Reviews by CoryR:

Stopped by while on vacation. This was the last brewery I was at while in Portland. Went there after 8 pm, they close at 10 pm, on a Friday night. The place was pretty dead. I wanted to get a tacker or a shirt, but the bartender said, that I could only buy them next door, which closed at 6 pm. That is lame! If I'm coming from out of state, and want to buy something from your brewery, it's free advertising when I where it. I get the feeling that Widmer has gotten big, and forgot about the regular beer drinker. Most taprooms or breweries have stuff you can buy, on hand. The servers were good though.

Like new eating layout. Menu leaves much to be desired. Food selections more upscale and not for average families. Like the beer. Probably won' t go back because of food selection.

6:00 on a Wednesday so no expectation of vibe...only for great beer. No disappointment. Had the Hefe as a warm up. It was good...nice citrus balance but hard to make an outstanding one. It hit the spot! Next up was a Marzen made with smokey hops. Had some Wisconsin name. I'm a Marzen fan so it was perfect for me. The smokiness gave it a character that was interesting as an add-on but hardly overpowering. It was a Marzen through and through. I did a sample of 2 of their IPA's just to try them side by side. Both good. I even liked the hoppier one (Glen -x) better because it had so much character than the replay even though i am not an IPA fan. Then I decided I wasn't in the mood so had the Belligerent Badger on Nitro. I just love this style. It was served too cold for my tastes as my expectation would be a 55 degree or more nitro. It did get better with time but who can hold off?

I had a nice, and cute, server. She was very efficient and helpful in her description of each style as well as bringing me samples.

Food was good but I only had a Kale salad since I was a pig on the pretzel starter. I would certainly try other stuff on a return visit and recommend this stop for a true classic beer spot. Many of the beers on the menu are only available at the pub, which makes it special. Thanks!

Exceptionally good service on a busy Saturday afternoon. Tasty meat/cheese board, and deserts. And some of the best beer in Portland. Big screen tv had game on, and rock and roll played on...

one of the truly iconic fixtures of the Portland brewing scene...still going 30+ years and strong...and in such a great and historic building...

I love the history and architecture of the building. Oh yeah, the beer was good too.