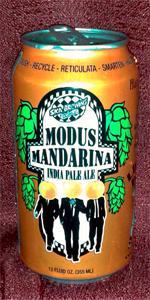 Notes: We collaborated with Kyle on a special batch of "Kyle's Manipulated Modus"- Modus Hoperandi brewed with orange peel and dry hopped with Mandarina Bavaria hops.
View: More Beers | Place Reviews
Recent ratings and reviews. | Log in to view more ratings + sorting options.
3.94 by animal69 from Louisiana on May 03, 2022
3.74 by TMoney2591 from Illinois on Aug 05, 2021

June 19th, 2016 - A taste of citrus here for the summer, in convenient can form, and with enough hops to move product in stores. The Modus Mandarina offers light notes of citrus and tangerine with some light hop character, and a refreshing, light body. The lightest essence of tangerine is also evident. I find this a very refreshing beer, aided by the light body and the kiss of tangerine in the flavor, and just a hint of hops to whet the appetite for a harder IPA but not spoiling my midday clear-headedness.

I will be the first to admit, I was pretty excited when Ska Brewing arrived here in Lancaster, PA. I scooped up a whole buncha CANs for The CANQuest (tm) & do not regret my decision. I say that only because I see that some reviewers have not enjoyed this beer. Fair dinkum!

I Crack!ed open the vent & beCAN a slow, gentle C-Line Glug into the awaiting glass. Not only did this produce two-plus fingers of dense, foamy, rocky, tawny head with very good retention, it made my kitchen smell like I had used an orange-scented air freshener! It smelled nice, but it really was not in keeping with the style since the hops were not truly the star while the fruit adjunct definitely was. Color was an orangish-Amber (SRM = > 7, < 9) with NE-quality clarity. Mouthfeel was medium. The taste remained very orange-y & while it was fine, it was not aligned with the style. Also, it was very authentic-tasting. It did not have the taint of artificial flavoring that some have mentioned. It was a pleasant enough beer & it was a bit of an SIW on Ska's part to call it an India Pale Ale. As a "Fruit & Field Beer" it would do much better. Finish was semi-dry, citrusy, tangy & quite refreshing. YMMV.

Candied orange peel, caramel, pale malt/2-row, Triple Sec/orange liqueur...it almost approaches a Delsym-like sickening syrupy sweetness but luckily avoids it. I can't say I dig its (artificial) orange-leaning flavour profile and its hop profile doesn't do it for me (it's a poor use of Mandarina Bavaria), but it's at least drinkable despite its flaws.

Sticky and pulpy to its detriment. Unrefreshing but well carbonated.

Not a great IPA, nor a great orange flavored ale. The best I can say about it is avoids the Delsym and orange soda pitfalls it could elsewise have been privy to.

Boozy orange/tangerine fruit and sticky syrupy sweetness. It's not terrible, but it's definitely a pass.

Smell - interesting, unique and overall pleasant. Orange rind but not the kind you often smell in certain IPAs. Almost has a fake orange-soda like quality to it. Underneath is a musky hop that can't really be characterized because the orange is so overpowering in comparison. Though on the whole, the beer's aroma isn't particularly strong. 4.25

Taste - A let down. Unexpectedly bitter but without a full complex hoppiness you'd get from a normal IPA. The smell gave indications that it would be sweet but that's definitely not the case. A unpleasantly metallic. 2.25

Mouthfeel - Harsh. A little too thin bodied. Dry and astringent throughout that dies down into a faint to moderate lingering in the finish. 2.25

Overall - Neat looking gimmick that doesn't live up to standards or expectations. Chemical harshness, lacks balance or body. One of those beers that somehow manages to be worse than the sum of its parts. 2

Pours a clearish reddish gold, aboot an inch of foam. Lacing is spotty.

Orange is up front, don't know if it is strong enough to include the word zest. Hoppy, low bitterness, cracker malt, smooth flavours, nothing to wear your palate out.

Orange soda notes in the nose.

A drinkable one trick pony; average.

Very citrusy flavor that became almost soapy by the end of a pint. It was ok but I did t want another one.

Pours a clear dark amber. Aroma is subtle with caramel, orange zest Tastes slightly tangy with grain, pine and caramel following. There's a hint of juice in the finish. Medium in body.

Simpler drinking than I expected, but still a tasty brew.

Modus Mandarina pours a hazy copper color, with a good long lasting, large and lacing head, with chunks in the middle. Earthy Aroma. The flavor is also pretty earthy, wet, a little dank, with a subtle hint of orange (not too sweet). Good body and feel. Overall, not bad, a little too earthy, but the orange peel really helps to balance that out.

Poured into a can glass.

The beer is a very deep burnt orange color with a thick light khaki head, decent retention and lacing.

Taste is woody, tangy, subtle mandarin citrus in the finish.

Mouthfeel is medium to heavy.

Overall, the ABV takes some of the lighter flavors away.

While the impressions of fruit seem to grow more and more each day in the craft beer craze, the cheat code nowadays is to actually use the fruit that the hops are trying to emulate. This is a ploy that Ska brewers know and employ quite well. Their Modus Mandarina takes the "Modus" character that's given their hoppy flagship so much acclaim and layers it with orange peel and Bavarian Mandarina hops for a tandem in taste that's hard t deny.

Light copper and an amber orange mixture frames the color of the moderately hazy ale. Crowned with a creamy cotton froth, the aromas of perfumy citronella accompanies a sweet toast breadiness as the nose is awash with citrus fruit. But on the tongue, and early savory sweetness takes hold with mild caramel, honey, graham cracker and a tepid jelly-like sweetness.

It doesn't take long for the sweetness to dissolve on the middle of the tongue and the guilt-free flavor of citrus speaks resoundingly to the tastebuds. Grilled peach, mandarin orange and a hint of mango carry a savory, tangy and toasty flavor into a bitterness on the late palate that's part herbal chive, orange peel, peppercorn and freshly shaven spruce.

Medium bodied, the beer's creamy beginnings eventually land quite dry. A radiant perfume is both bitter and tannic on the finish with the pectins of fruit spices playing a role in the absence of much malt influence. The oranges take the Modus Hoperandi subtleties and turn it into somewhat of a one-trick pony. But man, what a trick it is!

The aroma of fresh mandarin orange blends with black pepper and bread.

The taste is of mandarin orange with an earthy backing, Spicy bittersweet finish.

A solid IPA with a sweet mandarin orange character. Nice!

Pours a cloudy burnt orange with a thick layer of puffy white suds. Citrus notes on the nose and those follow suit on the palate. Fruity and citrus hope notes, resinous, piney. Dry and bitter on the back end. Overall- solid and quaffable brew.