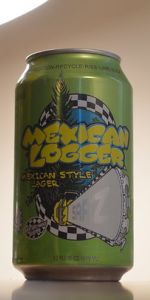 Notes: The perfect Mexican lager. Light and refreshing, it really hits the spot after a long day of brutal chainsaw work. Brewed with the finest malt, Saaz hops, yeast, water, and love.

Smell is muted, bits of straw and grass in there. No obvious hops. Not an unpleasant smell though like I get in most adjunct lagers.

Taste is slightly sweet with a light hop bite at the end. Again, nothing amazing, but much more pleasant to drink than your typical adjunct.

Mouthfeel is not overly carbonated and pretty crisp. Feels right for the style.

Overall this beer is about as good as you can expect. I intentionally had it on a hot day after working in the yard since I think that is kind of the point of this beer. This is a step up from an adjunct and fits its purpose very well. The problem though is the price point.... 9 a 6er is just too much for this style and in the end kind of defeats the purpose.

This Mexican-style Lager pours out of the can very pale, bright, straw in color with a thin creamy white head. Light aromas of cereal grains and herbal hops. Very clean. Light-bodied, but smooth on the palate with a crisp carbonation edge. Low bitterness, but flavorful with a pleasant citrus rind bite, light spice, and an herbal flavor. Grainy, earthy finish. This is a straight-forward, highly sessionable, clean, flavorful lager, that doesn’t need a lime to make it taste better (but it tastes great with one too). The only problem with this beer is that it’s not year-round.

Preface: Once again, I always rate a brew to style...

A - A very nice clear Yellow with an equally as nice white soapy/foamy head. Head pours very rich with good sustainability. Head leaves some nice lacing behind too. There's a slight straw color to both the head and the brew.

S - WOW, for a Lager, this is one of the best scent's I've ever smelt! Very nice a light, yet very powerful orange scent. Almost smells like an ocean, in a good way. Rose and light caramel also comes to mind. Clearly (as you can see from the logo) there's Saaz hops in this one.

T - WOW, Can't beat this one. Has a ton of deep flavors; for a Lager. Very smooth and delicious, there's absolutely no off flavors in this brew. All the flavors blend very well. Well balanced hops, a very early hop schedule. Zero biterness and full flavor! Maybe some slight green chili too

O - I cannot wait to take this one to the fishing stream or out backpacking! Quite the brew, I'm very excited SKA finally started distributing this one! SKA nailed the Lager style. A must try... LOOK OUT Another6pack....

Pouring the beer into my pint glass, the first thing I noticed was the decent carbonation level of the beer. I was expecting the head to be more prominent, but there only ended up being about a half of a finger width. The head on the lager was white as snow with the actual beer having a very light straw color.

The aroma was relatively mild. There was some cereal and grain qualities in which I was picking up. The hops had a definite presence by exuding a nice spiciness and hint of earthiness.

Clean, crisp and quenching. As you can see from the picture, I was drinking this on a very warm (105 is warm for Phoenix right?) day poolside. More so than any other beer in recent memory, I felt this truly quenched my thirst. Some of the first flavors I picked up were some ester characteristics, reminding me of a light cider. Light crisp apple and a ripe pear came through. The noble Saaz (I really enjoyed the play on words Ska came up with) complimented the fruit by portraying an earthy spice to the beer. Last, hints of biscuits and a subtle hint of caramel sweetness settled on the tongue.

Like I said before, this beer was light and smooth, with an obvious light body. There was enough sweetness to be satisfying, but not enough that made it heavy in body. The finish was very crisp, not leaving much on the palate after swallowing.

This is a beer that I plan on enjoying for the rest of the summer. I find that it is a great example that a light colored lager can buck the trend and have a full flavors. If you are looking for something to quench in this crazy summer heat, look no further. Ska steps outside the box of typical brewing and makes a beautiful lager. Prost!

#BOTG 48 is Ska Mexican Logger! Its pretty freakin hot outside, and nice to get a craft alternative to Mexican shitty lager from Ska. Poured from can into Brooklyn tulip. Pours a super cloudy sunshine yellow color. Crazy, not what I expected for color. No head whatsoever. Smell- not much of anything. Maybe a little whiff of corn. Taste- very smooth, clean, crisp. Some sweetness on the end. A little bit of bitterness from the hops. This neither smells or tastes like anything. But, I could see POUNDING this at the pool this summer. Much better than AAL, but nothing special here. But, I will buy this instead of Corona, Dos Equis, etc anyday.

Pours a pale gold really metallic looking sheen to it with a small finger high soapy head. Leaves very little lacing on the glass with some retention.

Sweet bread, cereal grains and corn meal make up the primary malt base, slight hints of cinnamon and oranges. Slight hint of yeast and grassy hops.

Soda cracker grains and more corn meal and some underlying sweetness. Hint of grassy hops. Slightly sweet for a lager, integration is done well but finishes clean, no soapy or crisp bite to it.

Light body, but flavors rather full for the body. Average carbonation, finishes clean but not lager crisp.

Pleasant lager ideal for kicking back in the summer months, a bit too sweet for my liking but the flavors were full and finishes clean leaving you ready for another.

Its like what would happen if Bohemia and Pacifico had a baby and someone raised it in a craft brewery.
Fantastic stuff.

M- Watery and bland not much balance to this one.

O- sorry SKA but this one fails for me. not worth the price. if i want a mexican beer i will go for modelo over this anyday. better price same quality

T: starts lightly sweet up front with lime, floral, traces of apple and light corn. It dries on the finish with a moderate bitterness and a slight tart note.

O: for what it is, it is good and drinkable but overall I find it meh

The Mexican logger is a sound good american pale ale. Its appearance is typical....average....smell includes the Saaz hop similar to others. The taste to me is much better balanced than the big marcos put out. The body is a nice medium to loght with good carbonation. overall a very tastee beer....probably one of the better american pales I've had.

12oz can poured into a Three Philosophers snifter.

Taste - Pretty complex for a lager. Clean with no off characteristics. The flavor profile morphs while on the palate.

Mouthfeel - Clean and light with a slight bite.

Can into pint glass
A –White 1 finger head from large bubbles dwindled quickly to a crown, crystal clear yellow with slight gold colors 3
S – Mild all around – slight toasted grains/malts and grassy hops 3
T – Grainy upfront, very slight sweetness with a floral bitterness clean/crisp finish. 3
M – Light in body and mouthfeel 3
O – With the great name, Ska is hitting what they have aimed for. A step above the macro brews of the style. 3