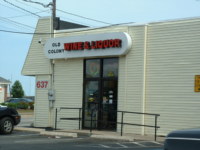 Reviewed by AdamF625 from Massachusetts

2.6/5  rDev -36.3%
vibe: 2 | quality: 3 | service: 2 | selection: 3
This store was a big let down. 1 aisle of craft beer with your usual suspects of Belgian and English bombers. The selection of American craft was poor, missing every local talent like mystic, jacks abby, nightshift, wormtown, and clown shoes. Tons of old stuff and dust on the shelves. The six pack selection was mediocre. I would only go there if I was desperate and in walking distance.
Nov 22, 2013
More User Ratings:

Rated by carney710 from Massachusetts

Reviewed by Wey85 from Massachusetts

i was impressed by the beer selection, there are more beers on the warm shelf when you walk in the beer aisle than there is probably in the cooler, although you can find all the warm beer cold inside the walk-in cooler.

the liquor and wine selection is amazing too, i requested an item one day and before i knew it. the second trip i was there, they had it ready for me and started carrying it

I highly recommend everyone to check it out, it is a very clean, well maintained store, the staff is very friendly yet very strict with the id thing!

Reviewed by bierschmecktgut from Massachusetts

4.7/5  rDev +15.2%
I always thought this was a regular packie for the 20+ years living near it. WRONG. Had to do a beer run for a cookout a few summers ago and stopped in.
Hey Bud Light for the party is right there in the cooler!.. next to the 4 different Lambics, next to the various cases of Pale Ales, 1L imports, a little further down more stuff.. absolutely overwhelming.
I turned around to face the beer shelf..
Polish, Czech, German, Italian, Belgian ales/lagers..Micro Brews up the ying yang and plenty of hoppy brews too.
I actually found Schneider Aventinus, Zwyiec and Julius Echter stocked in the cooler. Grabbed me a 4-pack of Julius and headed back with the lowly Buds.
I always go in - head right for the beers and make a selection, haven't been helped on the floor but not that I'm looking... the staff is usually buzzing around at check-out or bottle return. Have heard that the owner is very personable, I should make a point to thank him for bringing this stuff so close to home.

They also have wines, liquors, cigars and much more packed into a fairly small store, even found some good Lebanese wine, Polish Vodkas and new Tequilas over the years.

It's the only place I go [can go] for my specialty beers. I've told so many folks about it.

Reviewed by SSJeep from Massachusetts

3.85/5  rDev -5.6%
I guess you can say this is a very unique place. From the outside it kinda look like you average liquor/beer store. The reason I'm calling it unique is that it has a very good variety of brewers from all over the world. However, for many of the brewers it only has one style of beer. I don't usually expect every store to have everything but I do like to have more than one style from a brewer. Just seemed a little odd to me.

I had asked for help on pricing on a couple things that weren't labeled and received good service.

If it your first time there check out the cooler as well. I have found a few nice gems in there hidden a way. The cooler also has almost if not all the same beers on the shelf if you are looking to drink your purchase right away.

3.75/5  rDev -8.1%
Old Colony Liquors is a gem of beer variety south of Boston. Their selection is very impressive for foriegn beers. They have several beers from seemingly all around the world. All nations are represented and their domestic selection is fairly good as well. In shopping around their price is a little above average. I have been there several times. Oftentimes when I have gone, their customer service has seemed a little standoffish if not rude. If you want to get a hard to find, good tasting foriegn brew and do not care how you are treated, this is the place to go.
Jan 14, 2009

Reviewed by Puttenham from Massachusetts

I visited Old Colony Liquors on 10/4/2008. This package store is very unassuming from the outside. It looks like your typical repository for Bud/Miller/Coors, but once inside a pleasant surprise awaits.

Beers from all over the world, including (but not limited to) England, Belgium, Germany, Czech Rep., India, Central and South America, etc. line the shelves. The German and Belgian selections are very respectable and the Czech selection is outstanding.

A very good assortment of American microbrews as well.

The owner/manager (I didn't get his name) was very helpful and took time to introduce me to new beers. Quincy has a large foreign population and the manager explained that the store tries to carry international favorites for his diverse clientele. I've never seen beers from Wales and Bulgaria, but guess what? They have them.

I used to drive to Luke's Liquors in Rockland, Mass. or Downtown Wine & Spirits in Somerville, Mass. to look for my favorite imports and microbrews. No more. Old Colony Liquors is my new package store.

The store also has a wide array of foreign spirits and wines.

Very convenient for folks living south of Boston and recommended.

Reviewed by scubahood from Massachusetts

4.65/5  rDev +14%
I visited this place after learning about it from beerfly. I had driven past it many times and it looked very run of the mill. Once inside, however, you are greeted with one of the largest selections of beers especially considering how the store is fairly small. Beers represent many countries from El Salvador to Poland and from New England back to old England.

Each time I have received great service but the time that really sticks out was my first visit. I let them know I was looking for something hoppy that I hadn't tried. I was directed to a section that had a quite a few beers I had selected and as I was about to point this out I was told to wait there. After what was an amount of time that it means you were forgotten about I was greeted with an offering which fit my criteria perfectly. You can tell he went out of his way to dig through the back just to find it.

This is my go to store from now on and I recommend you check it out!

Reviewed by drinksandeats from Massachusetts

4.65/5  rDev +14%
Visited almost by accident, and I'm glad I did. I perused the long line of cooler space, filled with a wide variety of beers, most of them imports. I caught Eddie, who I think owns or manages the store, as he was doing inventory, and he talked to me a while about the operation. He boasted the widest selection of imported beers in the area, and the shelf behind him backed him up. There were a lot of European imports. Besides the standards, there was a large collection of Russian and Polish beers. Prices were a little high across the board, but given their size and commitment to variety it's understandable. I came in looking for something to drink while watching basketball, but I'll be sure to make a return visit to pick up some fine Eastern European lagers.
Mar 20, 2008

3.85/5  rDev -5.6%
If you love imports, you really need to go here. They represent almost every single country that brews beer. Other than that, a commendable domestic micro selection. Most of the New England brews as well as some Stone and other West Coast brews. The service is shaky, at least when I was there, because there was an older woman at the counter and a shy redemption guy who did know a little bit about the selection. The prices were pretty good as well. Definitely check it out if you are in the Quincy/Weymouth/Braintree area.
Jan 04, 2007

Reviewed by WeymouthMike from Massachusetts

4.3/5  rDev +5.4%
I randomly stopped here one night on my way home from work out of convenience. I was amazed by the selection and has been my goto store for about six months now. Anything they don't have Vinnie is more than willing to get it for you and call you when he gets it in stock.

Selections include Rogue, Thomas Hardy, Victory, Delirium, Unibroue, Dogfish, plus all of the typical New England regional offerings. What the store specializes in is its international offerings, not just Belgian . I really need to read up on these beers but offerings from asia, brazil, and every part of Europe.

Prices are pretty good for little store and Vinnie the beer guy is always willing to talk beer and you ay just run into him at the brewhouse.

3.8/5  rDev -6.9%
I stopped by Old Colony Liquors on a Friday night. It was busy with a steady flow of customers. Most people appeared to be buying liquor and macros. I witnessed a ton of 30 packs being sold.

This is a mid-sized store and doesn't look as big from the outside. It's got that somewhat run down package store smell and decor. To your right are the coolers of beer. There are also bottles of warm beer on shelves behind the cooler too...6 packs, singles, 750 ML's, etc.

I must say that I've never seen such a great selection of crazy Eastern & Central European, South American and Mexican beers. There were a ton of beers that they carry that I've never heard of, nevermind have the ability to pronounce.

During my visit I picked up Lion Stout, Hitachino Nest Red Rice Ale, Aventinus and Tripel Karmeliet. My service interaction was limited. I wasn't offered assistance, but I didn't have any negative interactions either. Credit must be given to the unique selection at this place. Certainly worth checking out if you find yourself on the heavily traveled RT 3A (Southern Artery).

4.15/5  rDev +1.7%
One of the first things a beer lover notices at the front entrance to the store is an official looking sign that states, The Largest Selection of Imported Beer in Massachusetts. While this store does indeed have a fairly large selection of imported beer, it falls behind a few that I know of.
One thing that does set Old Colony apart from other mega-stores, are the unique selections of the more obscure countries represented. An impressive supply of Western, Eastern and Central European brews are in stock. Beers from Lithuania, Estonia, Russia, Bulgaria, Poland, Ukraine, Israel, Greece, Armenia and Turkey can be found. They also carry a solid choice of Central and South American beers. You need South of the Border brews to bolster your review karma? Theres Mexico, Guatemala, Honduras, El Salvador, Bolivia, Peru, and especially beers from Brazil to choose from.
The selection of beers from the U.S., Germany, and Czech Republic is adequate. The selections from Belgium and the U.K. are lacking, though the list is getting a bit larger with each visit. The service is friendly and helpful (ask for Vinnie, the Brazilian to assist you). Unfortunately, they do not allow you to remove singles from set 4 or 6 packs.
One reassuring note of getting fresh beer is that Vinnie assures me they send unsold and expired beer back to the distributor.
This is a store, that if youre in the neighborhood, or just passing by, is worth a look. Chances are good that youll find something youve never tried before, and that is why Ive taken the time to BeerFly this store.

Update: Since June 2005 they have carried Thomas Hardy!