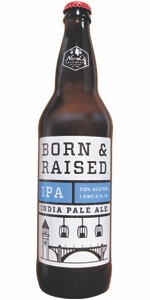 Notes: Bred right here in the Fair City, this Expo-sized IPA is made from hops and barley harvested within 300 miles of the No-Li Brewhouse. Washington's own Cascade, Columbus and Chinook hops span across 2 row malt from Armstrong, BC.
View: Beers | Place Reviews
Reviews: 80 | Ratings: 283 | Log in to view all ratings and sort
Reviews by hundo:

Appearance: Pours a darker copper color. The head is a finger high and pale orange in shade. Retention is very impressive, helped by the aesthetic appeal of the creamy texture. A nice ring of lacing is left on the glass. (4)

Smell: The hops take on a piny, somewhat dank tone here. There are some slight grapefruity twinges, though. It's quite malty by IPA standards, also. I'm picking up a lot of caramel, brown sugar, toffee, and fruit esters. I'd say it's a bit too sweet personally, but it's far from bad. (3.25)

Taste: Definitely a bitter, pine-forward IPA. There are three stages of this brew: an initial piny taste, an upsurge of sweet, almost candy-like malts, and a returning pine-laden finish. The aforementioned finish is really bitter - almost too bitter. On the plus side, it helps to quash some of the sweetness nicely, though some still lingers. (3)

Mouthfeel: The bitterness makes it really dry, but the lingering sweetness helps give it a long finish. Drinkability is solid, which is good for an IPA that leans toward being slightly heavy. Carbonation is high. (3.5)

Overall: A fairly typical 'old-school' IPA - that is to say there's a lot of malt, but also a lot of pine-laden bitterness. Well done for what it is, but I prefer the newer school approach (unobstructive malt, tons of hop flavor, minimal bitterness). This is hard for me to revisit considering it doesn't have any form of bottle dating on it. (3.25)

3.2/5: Decent IPA, but nothing spectacular

A: Pours a lightly hazy deep copper in color with light amounts of gentle visible carbonation along the edges of the surface and a hint of dark golden yellow + orange highlights. The beer has a two finger tall foamy sudsy light tan head which slowly reduces to a couple of medium thick patches, a thin film covering the remainder of the surface of the beer, and a medium thick ring at the edges of the glass. Significant amounts of lacing are observed.

S: Moderate to strong aromas of pine, herbal, and citrus/grapefruit pith hops over a light amount of caramel malts.

T: Upfront there are moderate flavors of caramel malts with a fair amount of sweetness which is quickly overtaken by strong flavors of the hops - pine stands out with slightly lesser amounts of herbal and citrus/grapefruit pith. Moderate to heavy amounts of bitterness which lingers for a long time.

O: For me, this is just on the border of a IPA and a DIPA - probably would be more highly rated if it was a more well known brewery. I find this one to be really enjoyable and pairs quite nicely with spicy foods.

T - Great balance with a touch of malt to round the hops.

M - very smooth.
D - Palletably smooth with good texture and refinement. Living in Curlew, WA now, I can get used to drinking a beer like this. Paying $4 for a bomber seems reasonable for the overall quality.

Appearance: rich orange hue with a fair bit of haze; it's too murky to really see the effervescence. Head is a thick finger of pillowy tan foam with a touch of an orange cast to it. Quite good.

Smell: lightly caramelly, toasty malt base with a good citrus nose. I'm getting lots of grapefruit and a resiney, piney aroma as well. Very Northwestern; I think it's balanced and well-executed.

Taste: malt has a little bit more toastiness here than in the aroma, but the hop bill tastes almost exactly as it smells. There's a little bit of a deep funk going on here too, which is not surprising considering the strength of the hops. Bitterness is strong, but not out of balance; it's a little rasping but nothing out of hand. I like it.

Mouthfeel: medium body with a decent carbonation. Not exactly creamy, but passable for the style.

Overall: a decently drinkable Northwest IPA. It doesn't stand out from the pack, but it is a solid daily drinker.

Lovely coppery amber with a thin mustache of foam in the DuPont chalice. Sweet grainy taste to start. A touch of honeysuckle in the nose. Hot mango taste with a little leaf mold. Dark bitter finish.

A pleasant hoppy brew with a rich malty flavor. From the 22 oz bottle purchased at Haggen's supermarket.

A: Hazy amber color while the off-white head is rather tall and compact, and leaves rather nice lacings.

T: Very bitter together with rich sweetness from the toasted caramell malt. Pineapple, grapefruit, and oranges from the floral hops. The sweetness is almost like molasses.

M: Long bitter and very sweet aftertaste. The body is full and very smooth, while carbonation is modest.

O: A nice and bitter AIPA - with a sweet twist.

Aroma: Expected citrus notes of grapefruit rind with a certain grassy character. While the aroma in general is certainly hop focused, it isn't entirely bright. If you look for it you'll find some bread crust and caramel.

Appearance: Pours a deep copper, nearly red, with excellent clarity. Creme colored head rests thin but persistent. A trace of lacing sticks to the edge of the glass.

Mouthfeel: Medium body with light carbonation. There is almost a foaming character in the mouth with the carbonation that creates palate fullness. Hop bitterness holds on to the roof of the mouth and back of the throat as chalky and resin.

Overall: For an IPA you're not shorted on the hop presence in bitterness, flavor, or mouthfeel. While the aroma rings true of an American IPA it comes off somewhat mottled and unfocused. Brighter hop aroma would be welcome and expected with all that flavor and bitterness. A fine selection for the hop lover while holding a delicate balance with the malt.

Pours two and half fingers on a clear dark straw colored body.
The aroma is spicy with some lemon and a little earthy.
The taste is moderate pine and lemon bitterness backed up by a big malt bill. It finishes with a long pine bitter note.
The texture is crisp with moderate carbonation.
Quite enjoyable.